We list the best hotels, hostels, B&Bs and guesthouses in Vienna as recommended by travel experts from CNN, Lonely Planet, Fodor’s, New York Times and more. All hotel recommendations have been referenced with customer reviews, and we only list hotels which have a review rating of at least 4 out of 5 stars.

Vienna is a major international center and hosts numerous international organizations, events, and conferences. The city hosts both the United Nations and OPEC. The city is recognized as a UNESCO World Heritage Site.

The city is referred to as the “City of Music” as a result of its rich history entrenched in music and also referred to as the “City of Dreams” due to the fact that it was the home of the world’s first psychotherapist, Sigmund Freud. The city is rich in architectural collections that include Baroque castles and gardens as well as 19th-century Ringstrabe lined with grand buildings, monuments and parks.

The city ranked first in a study of 127 cities as the world’s most livable city. It is ranked highly for its standard of living.

If you like our list of best places to stay in Vienna, then you should also check out our selection of recommended hotels in Prague or the best hotels in Budapest. 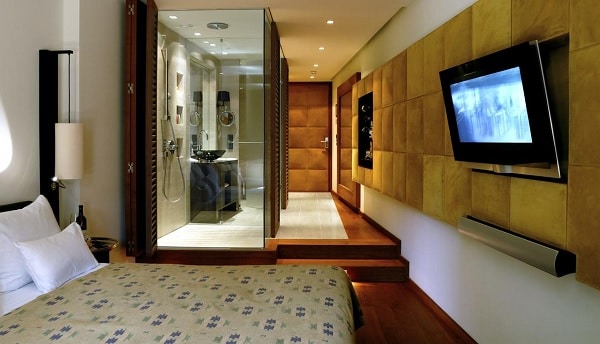 “Up-close views of Stephansdom extend from higher-priced rooms at this swanky hotel, and all 43 rooms come with state-of-the-art entertainment systems and multicountry power sockets. Some have in-room Jacuzzis.” 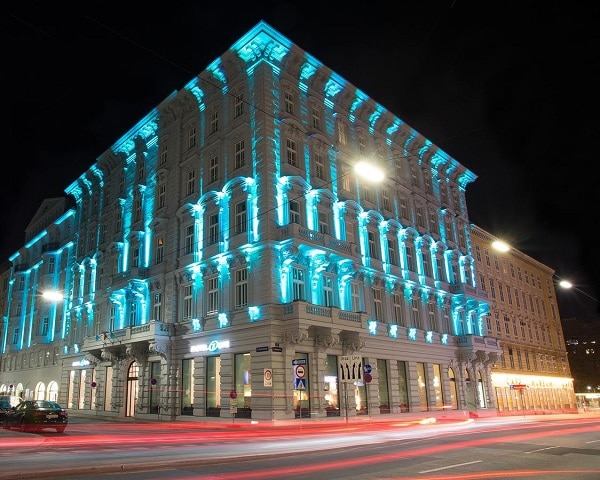 “Conveniently located by the State Opera and the transit hub Karlsplatz, Motel One Vienna Staatsoper offers immaculate and efficient digs.” 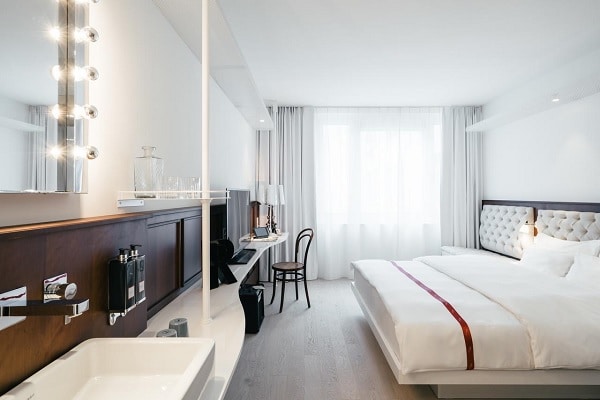 “With a vintage-inspired bar in lieu of reception or concierge, the funky boutique hotel Ruby Lissi lives up to its “lean luxury” motto, offering uncluttered rooms in the heart of the city, just around the corner from Otto Wagner’s striking Postal Savings Bank.” 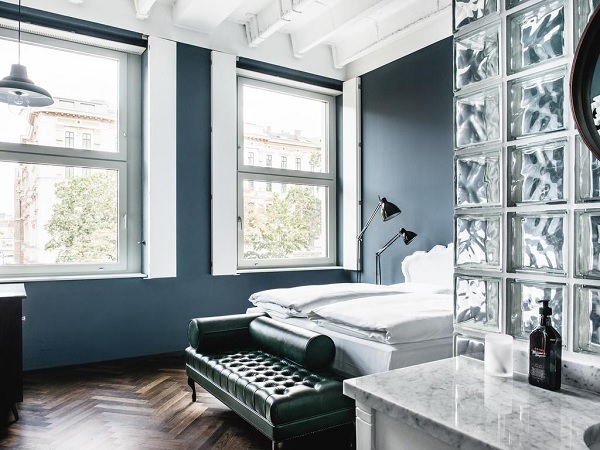 “Grand Ferdinand, abundant in burgundy leather, parquet flooring and offbeat details like a taxidermy horse, offers gorgeous rooftop vistas. Its 188 rooms range between a grand suite of rich tapestries and a Lobmeyr chandelier to what might be the city’s — if not Europe’s — swankiest dorm rooms with mahogany bunk beds and housekeeping services.” 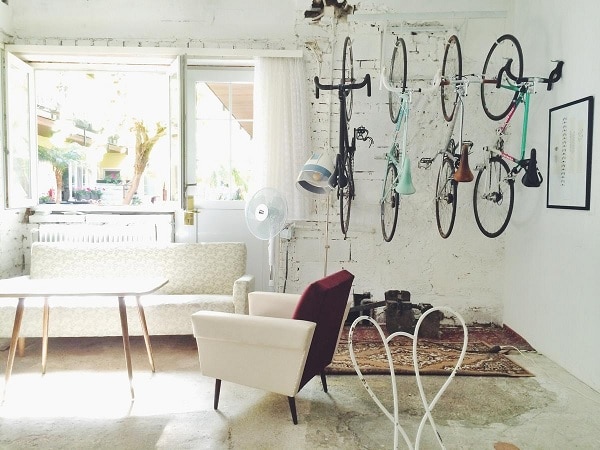 “Set on a quiet street in the arty Seventh District, the quirky Hotel am Brillantengrund has 34 rooms ranging from compact singles to small apartments that sleep up to four guests, all with private baths. Each room has a different décor.” 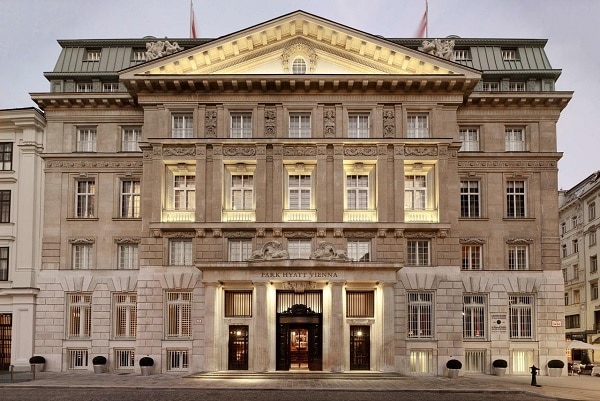 “The Park Hyatt Vienna has landed with a splash in a grand former bank just off the tony Kohlmarkt shopping street. It has 143 rooms (of which 35 are suites) that feature a slick but cozy mix of warm wood accents and shimmery fabrics and leather upholstery.” 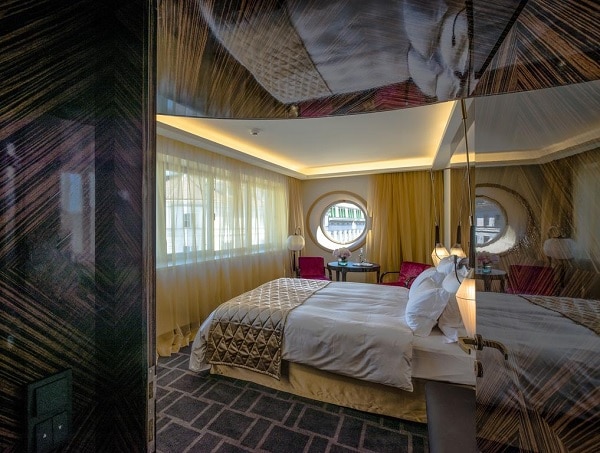 “This lodging is a nod to 1940’s Hollywood. Its muse was the late Austrian film maven and inventor Hedy Lamarr. At the crossroads of kitsch and cool, there is that glossy sheen to nearly every surface, accented by pink crushed velvet chairs and ottomans.” 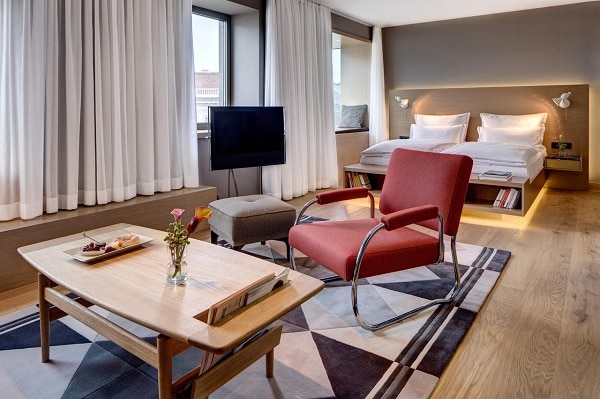 “Smack behind the Albertina and the Staatoper, this authentically Austrian boutique hotel is an absolutely delightful addition to the Vienna lodging scene, with fabulous views of the heart of the Innere Stadt.” 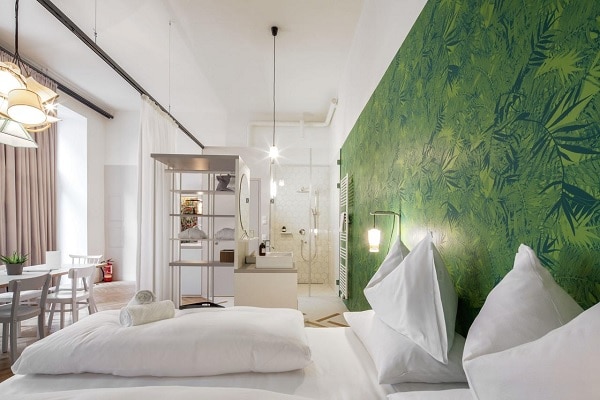 “Where electricians, lamp makers and bakers once plied a trade, the Grätzlhotel has injected new life into Leopoldstadt with ultra-cool interiors courtesy of some of Vienna’s top architects. Just around the corner from Karmelitermarkt, the suites are minimalist and streamlined.” 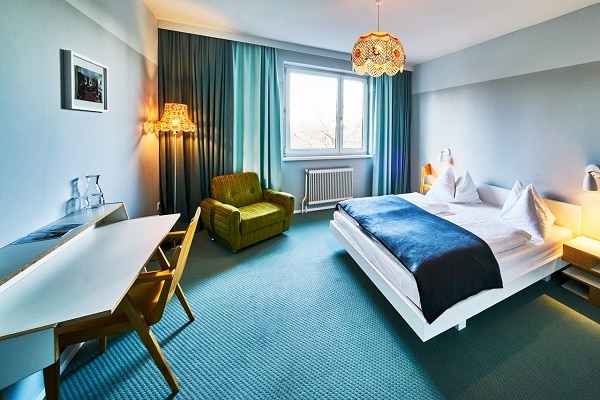 “How clever: the Magdas is a hotel making a social difference as here the staff who welcome guests are refugees. The former retirement home turned boutique hotel opened its doors in 2016 and hit the ground running. The rooms are retro cool.” 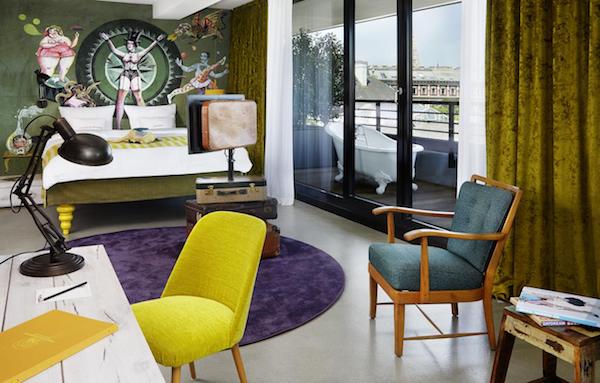 “Artsy, eclectic, and deliriously Bohemian, the clever circus-themed walls by Olaf Hajek are sure to charm. Each room contains extraordinary and exceptionally-illustrated wallpaper of old-time, big top themes by the German artist and deliciously quirky vintage furnishings.” 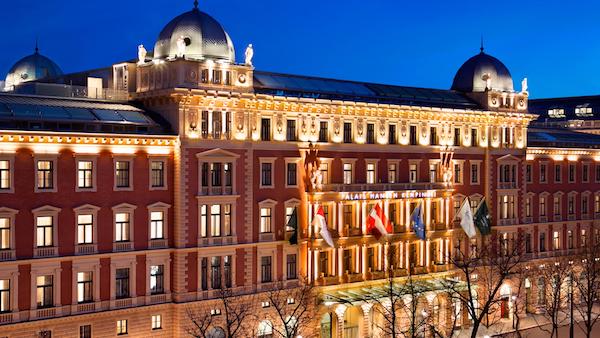 “Inside a building designed by Theophil Edvard von Hansen for the 1873 World Expo, the lobby appears as a bright atrium, with skylights beaming onto the tasteful lounge area and reflecting off intricate chandeliers. This place is luxurious, but without the Old-World pomp of some of its Ringstrasse peers.”

What are the best neighborhoods to stay in Vienna?
This is Austria's picturesque capital, located on the banks of the river Danube, and is also the home to legends like Mozart, Beethoven and Freud. Some of the trendy neighbourhoods of Vienna that you should visit when on a trip are:

Schonbrunn
This is the home to the oldest zoo in the world, which houses Pandas and Jaguars and the UNESCO heritage site- the Schonbrunn Palace garden and the Palace tour itself. There are quaint cafes to satiate a hungry tourist, and also several star hotels where you can stay for a day or two.

Ottakring
It is a multicultural and nouveau part of the city with an incredibly vibrant feel. You will find Serbian cafes and Turkish food stalls, showcasing its mixed atmosphere. You can hike up the Wilhelminenberg hill for a wonderful view.

Mariahlif
It boosts of trendy fashion boutiques with all the global brands available a well as Vienna’s largest outdoor market which offers various kinds of cuisines. A World War 2 tower has been turned into an aquarium providing a magnificent view of the city. You will find classic Viennese cafes and the famous theatre houses.

Neubau
This is one of the newer parts of the town inhabited by the young crowd. If you are looking for the edgy contemporary cafes and minimalist restaurants that cater to the global taste, then this is the place for you. It has a museum boasting of the famous Leopold collection.

Wieden
A colossal baroque style church of Karlskriche is the main attraction. The adjacent square hosts market and open air theatres draw a young clientele to its quirky eateries and bar.
How much does it cost to stay in a Vienna hotel?
For a 3-star hotel you have to pay around $120 per night and for a 4-star hotel you would be looking at $160 per night. If you're after a luxury 5-star Vienna hotel then you can expect to pay around $300 per night.
Which Vienna hotel serves great breakfast?
Try Palais Hansen Kempinski if you're looking for a delicious breakfast at a hotel in Vienna. It has excellent customer review ratings for breakfast.
Which Vienna hotel offers great views?
If you're looking for a room with a view, then try DO&CO Hotel. The hotel offers amazing views of Vienna according to recent customer reviews.
We use cookies on this website to analyse your use of our products and services, provide content from third parties and assist with our marketing efforts. Learn more about our use of cookies and available controls: cookie policy. Please be aware that your experience may be disrupted until you accept cookies.