RecommendedRoom lists the best hotels in Toronto as recommended by travel experts from CNN, Lonely Planet, Fodor’s, New York Times and more. All hotel recommendations have been referenced with customer reviews. The ratings you find on this list is an aggregate from several platforms and is always higher than 4 out of 5 stars showing just how highly rated the hotels are.

The city of Toronto is the capital city of the province of Ontario and the largest city in Canada by population. Toronto is a global city acting as a center of business, finance, arts, and culture and regarded as one of the most multicultural and cosmopolitan cities in the entire world. The diversity of the population of Toronto is best reflected in its current and historical role where it acts as a top destination for immigrants to Canada. As a matter of fact, Toronto has over 200 distinct ethnic groups among its inhabitants with over 160 languages spoken by residents of the city.

Toronto is a prominent center for music, film, and theatre and is also home to the headquarters of major national broadcast networks and media outlets. The city has numerous cultural institutions with several museums, galleries, festivals and sports activities held in the city.

Toronto sees over 25 million tourists yearly making it one of the top tourist destination in the world. Toronto is famous for being a city with many high-rise building and skyscrapers; the tallest free-standing structure in the Western Hemisphere is located in the city, the CN Tower.

If you like our list of best places to stay in Toronto, then you should also check out our selection of recommended hotels in Montreal or the best hotels in Vancouver. 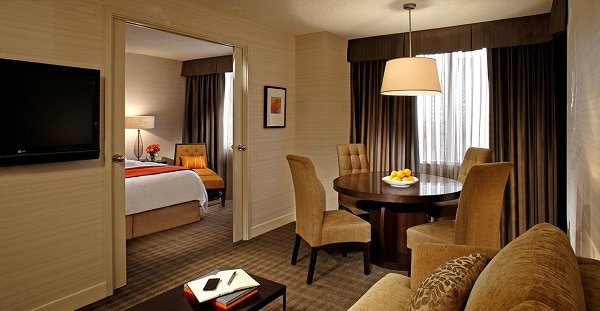 “The 229-room, all suite Cambridge Suites Toronto is centrally located downtown, close to subways and attractions like the St. Lawrence Market. Portico, the hotel’s restaurant, is pricey but quite good.” 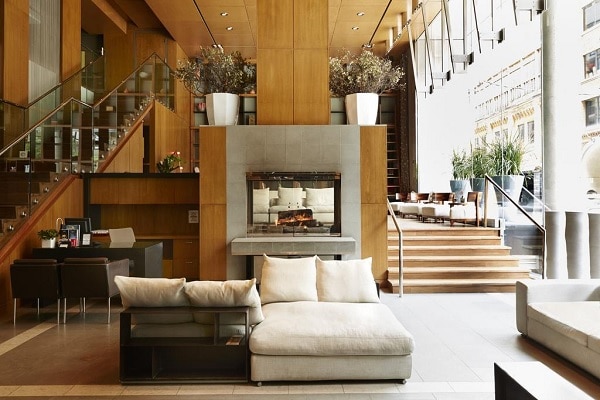 “Le Germain Hotel Toronto on Mercer Street, is one of two Toronto locations of this Canadian boutique hotelier. Located in the downtown entertainment district, across from the Second City comedy theater, it offers a centralized home base for exploring.” 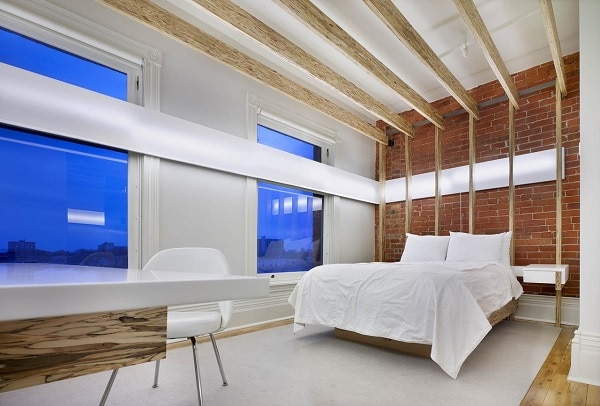 “The 37-room Gladstone Hotel is as much art destination as sleeping quarters: the first two floors are filled with exhibitions, and each room was designed by an artist. The Sunday bluegrass brunch is packed with children.” 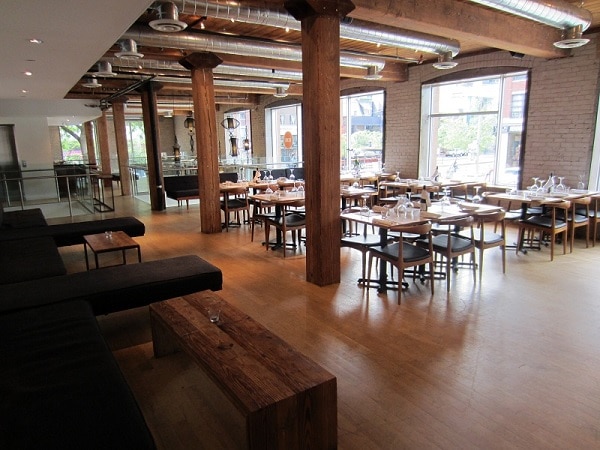 “The 12-room Hotel Ocho, a former textile factory dating from 1902 in the heart of Chinatown, was built with the local cutting-edge design team Design38. The downstairs bar, lounge, restaurant and coffee shop draws locals.” 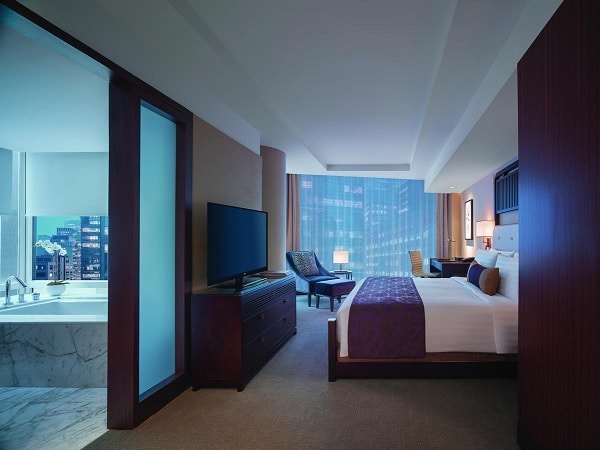 “Cost will keep most away, but for those looking for a splurge (or exercising a corporate account), the Shangri-La Toronto offers the standard high level of service and comfort the chain has become known for.” 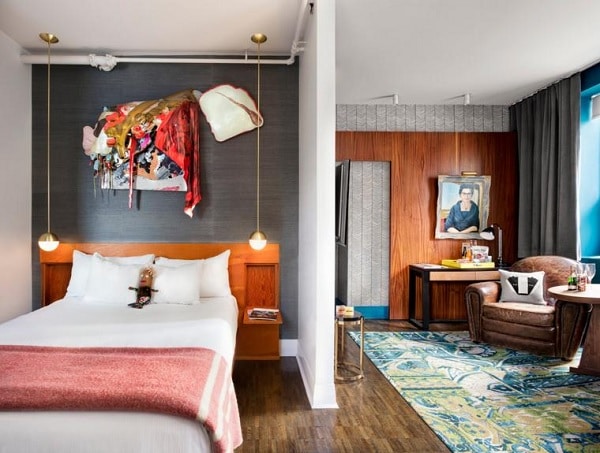 “Here’s a home-away-from-home in Toronto’s trendy West Queen West neighborhood. From the tiny Solo room to the extra-large Suite, the Drake Hotel is the perfect place for travelers looking for a more eclectic place to lay their heads.” 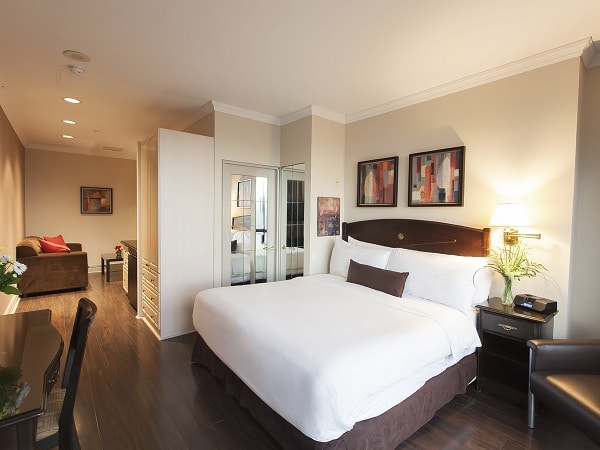 “One of the best hotels in Toronto, dollar for dollar, the Grand’s 177 suites are all done up to strike a tasteful, understated tone. They come with fully equipped kitchenettes and all the regular features — TVs, CD and DVD players.” 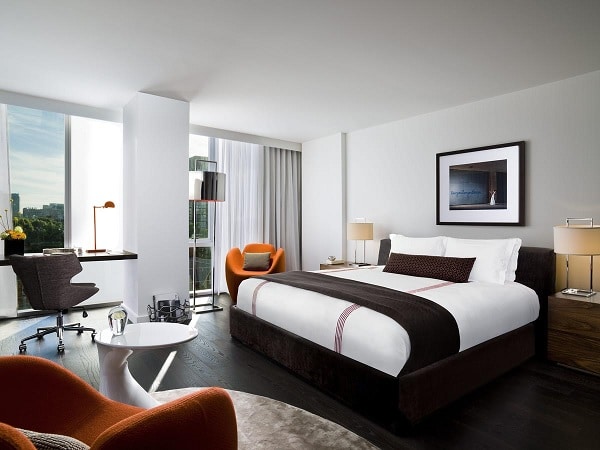 “The Thompson’s 102 guest rooms (some with balconies) have floor-to-ceiling windows, heated bathroom floors and unique lighting features, along with plasma TVs and iHome docking stations.” 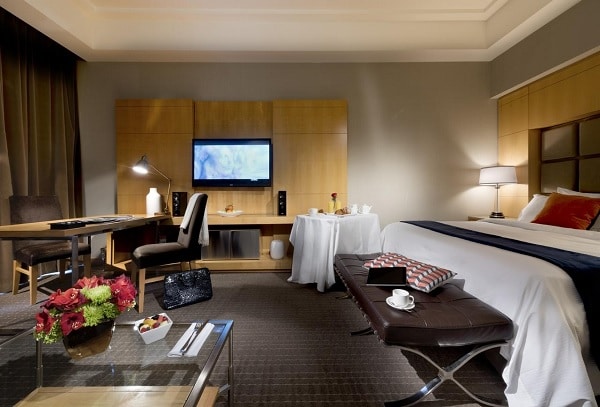 “This contemporary hotel in a slick condominium complex is a short walk from the shops and restaurants on King West and Queen West, plus the bars and clubs in the Entertainment District.” “The Royal York is the Grand Dame of Toronto’s hotel scene, an imposing stone and copper-roofed structure that’s firmly anchored in a sea of steel and glass. It’s been a star since it officially opened in 1929, a favorite for royalty, celebrities, movie directors and regular folk.” 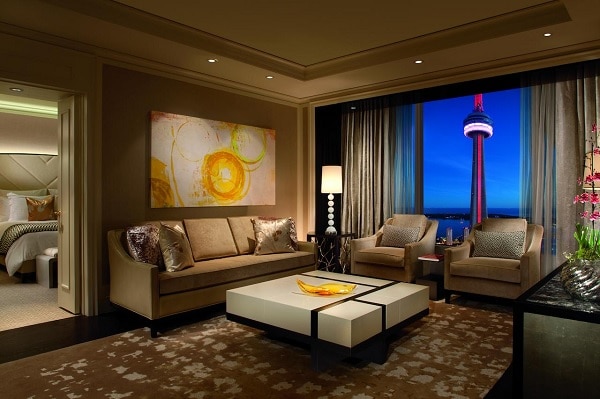 “With its glossy wood, big brass maple leaves, neutral earth tones and original artwork, the Ritz-Carlton is a luxurious tribute to Canadiana. The hotel’s 263 guest rooms, all at least 41 square meters, provide views of the CN Tower and Lake Ontario.” 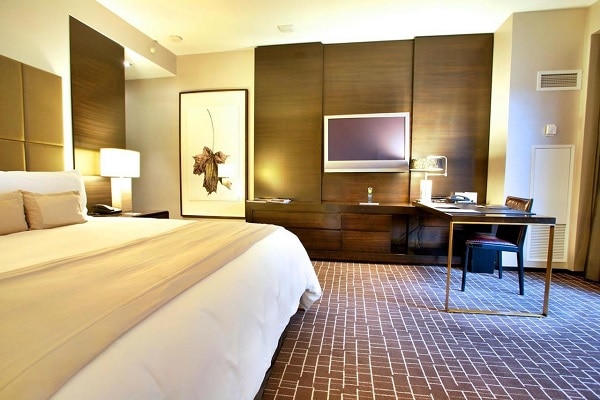 “Competitors in the luxury hotel class have in recent years made it harder for the Hazelton to uphold its self-professed reputation as Toronto’s most exclusive hotel: but try it will, and you’ll only benefit from its efforts. Sophisticated, dramatic and sexy.” “This gleaming 55-story tower in the leafy Yorkville neighborhood sprung from the drafting table of celebrated designers Yabu Pushelberg, known for their elegant yet modern sensibility.”

Featured as Fodor’s Choice in Toronto.

What are the best neighborhoods to stay in Toronto?
Located along the banks of Lake Ontario, the most distinguishing feature of this city is the CN Tower which dwarves the entire the city.

Kensington Market
It is a bohemian neighbourhood that attracts a hippie crowd to its art spaces and store-front. It is home to trendy bakeries, bars and cafes and a wide range of restaurants offering global cuisines. You can get a feel of the world by traversing the lanes of the Market.

Harbourfront
You will come across galleries, performance arenas and craft centres jostling for space along the water-front. You have shopping centres with retailers as well as casual shopping. There are many parks and trails which provide the hotels with a beautiful view.

Riverdale
It is a multicultural community with a strong Greek influence on the food scene. There is a strong presence of Asian flavour. One can escape the hustle bustle of the city and get lost amidst the Victorian architecture.

The Annex
Located in downtown Toronto is the home to the famous University of Toronto. Thus, it has a young gentry thronging the several fraternity houses. There is a vibrant social scene with independent stores and a mixed range of cuisine. Popular restaurants and hotels have branches in this neighbourhood.

Downtown
It is the heart of Toronto and is thronged with people both on business and vacation. You will find small budget hotels as well as imposing 5-star hotels. Dotted with skyscrapers, this place has much to offer in terms of diversity.
Which Toronto hotel serves great breakfast?
Try Le Germain Hotel or The Grand Hotel & Suites if you're looking for a delicious breakfast at a hotel in Toronto. Both have excellent customer review ratings for breakfast.
Which Toronto hotel offers great views?
If you're looking for a room with a view, then try Hotel Thompson. The hotel offers amazing views of Toronto according to recent customer reviews.
How much does it cost to stay in a Toronto hotel?
For a 3-star hotel you have to pay around $140 per night and for a 4-star hotel you would be looking at $200 per night. If you're after a luxury 5-star Toronto hotel then you can expect to pay around $450 per night.
Which Toronto hotel is the best for couples?
Try The Hazelton Hotel if you're looking for a romantic getaway in Toronto, it has some excellent recent customer reviews by couples.
Which Toronto hotels are the best for families?
If you're looking to stay in Toronto with your family, then try Le Germain Hotel. The hotel has excellent review ratings by families.
We use cookies on this website to analyse your use of our products and services, provide content from third parties and assist with our marketing efforts. Learn more about our use of cookies and available controls: cookie policy. Please be aware that your experience may be disrupted until you accept cookies.