We list the best hotels, hostels, B&Bs and guesthouses in Singapore as recommended by travel experts from CNN, Lonely Planet, Fodor’s, New York Times and more. All hotel recommendations have been referenced with customer reviews, and we only list hotels which have a review rating of at least 4 out of 5 stars.

Singapore is a sovereign city-state and island country in the Southeast region of Asia. Singapore is a global commerce, transport, and finance center in the world. The country ranks highly in several indexes that show the growth and development of the country; it is ranked the most “technology-ready” nation by WEF, the best investment potential by BERI, world smartest city, world’s safest country, and top international-meetings city.

The country is a major foreign exchange center as well as being a major financial center. It is also a major global trade center having the second busiest container port in the world. The country’s port and Changi Airport have held the titles of “Best Maritime Port” and “Best Airport” for consecutive years. The country is ranked highly in development indexes such as education, life expectancy, quality of life and personal safety and housing.

All these contribute to make Singapore a major investment destination and tourist destination which has reflected in its hospitality industry with several top-star resorts and hotels springing up. Singapore is a diverse culture with several languages spoken, religions practiced and cultures existing together in the country.

If you like our list of hostels, B&Bs and hotels in Singapore, then you should also check out our selection of recommended hotels in Bangkok or the best hotels in Tokyo. 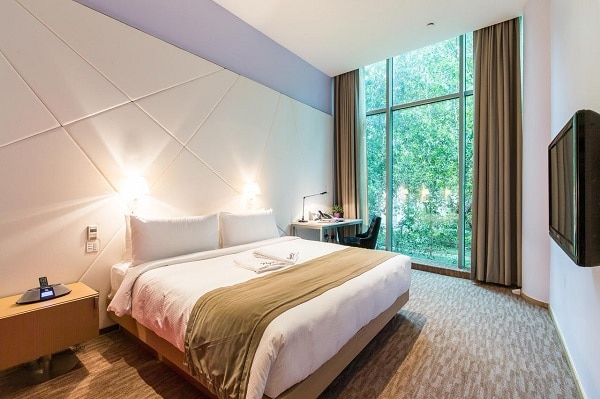 “Funky, compact Klapstar is the antithesis of Singapore’s big brand hotels. Klapstar has just 17 rooms, but it might be the most interesting accommodations in Singapore. Everything about this boutique property has been ingeniously thought out.” 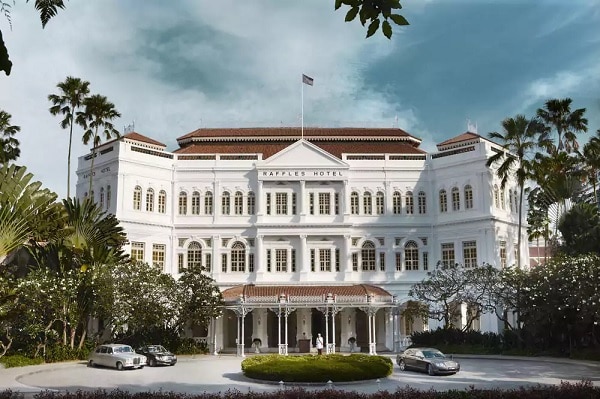 “The grand old dame of Singapore has seen many a famous visitor in her time, from Somerset Maugham to Michael Jackson. It’s a beautiful place of white colonial architecture, lush pockets of green, and historic bars.”

“With spectacular views over the city and a secluded pool area, the newly renovated Ritz-Carlton Millenia is a luxury option that’s also child friendly.” 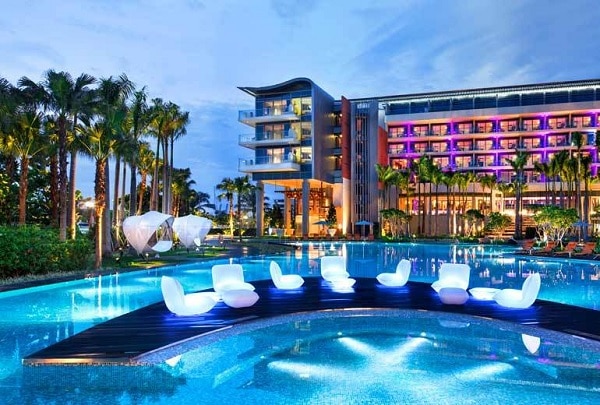 “A modern, plush hotel with a terrific range of amenities. Unabashedly kooky in a stylish way, this 240-room hotel introduced the chain’s trademark in-your-face flashiness to one of Singapore’s wealthiest ZIP codes when it opened in 2012.” 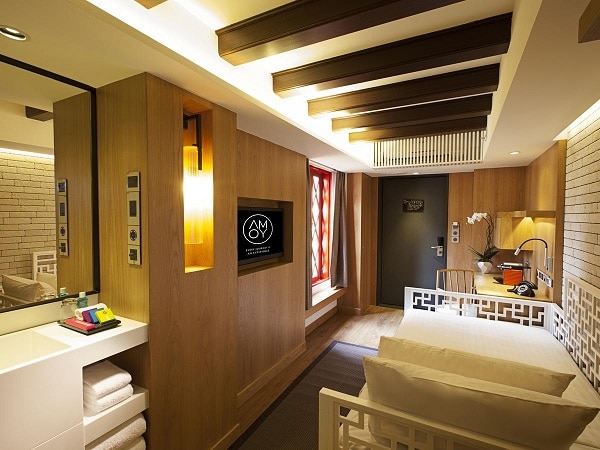 “Step through its heavy wooden doors and a calm washes over you — making this one of the most unusual entrances to a Singapore hotel. A charming — and calming — Chinese-inflected boutique experience in the heart of busy Singapore.” 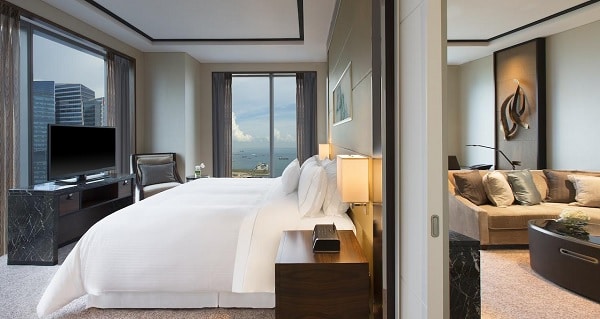 “All rooms come with glass-to-ceiling windows and the 32nd-floor lobby is (currently) the highest in Singapore. But the Westin’s crown is the 35th-floor infinity pool that goes neck-and-neck with the pool at the Marina Bay Sands for the title of best in Singapore.” 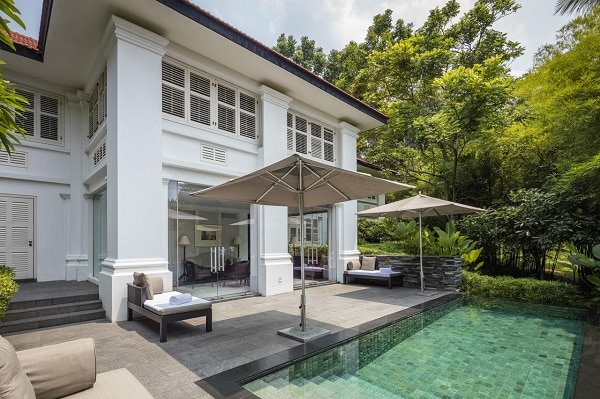 “The romanticism of the British colonial era lives on at the six-star Capella Singapore resort designed by Lord Norman Foster. Sprawling 30 acres, the 112-room property lives up to its luxe reputation with extras like a personal butler per guest, a three-tiered swimming pool overlooking the South China Sea.” 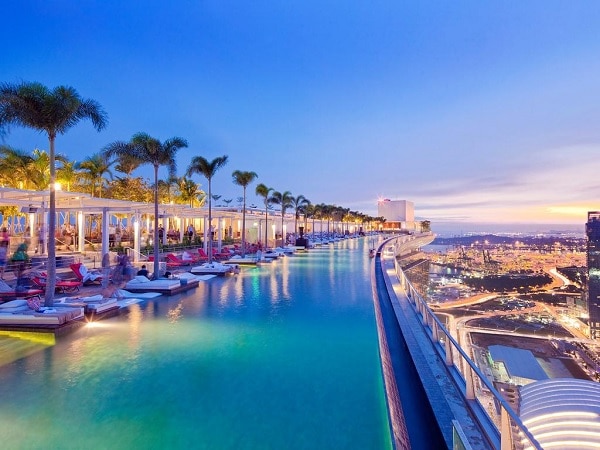 “A Singaporean icon, Marina Bay has drawn oohs and ahs for its dazzling architecture and its stunning facilities. Each of the sumptuously appointed rooms has floor-to-ceiling windows with breathtaking views of the city skyline or the South China Sea.”

Featured as Fodor’s Choice in Singapore. “The stunning architecture at this hotel integrates environmental principles both inside and out; its lush sky gardens can be seen from the street. Floor-to-ceiling glass windows are used throughout to decrease the need for artificial lighting.”

Featured as Fodor’s Choice in Singapore. 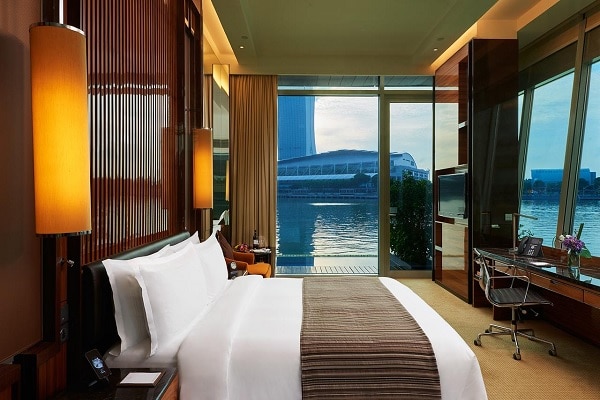 “A former spice shop and distillery is now The Warehouse, a 37-room boutique hotel. You don’t need to jump in the adjacent river to cool down, either: The rooftop has an aquarium-like pool.” 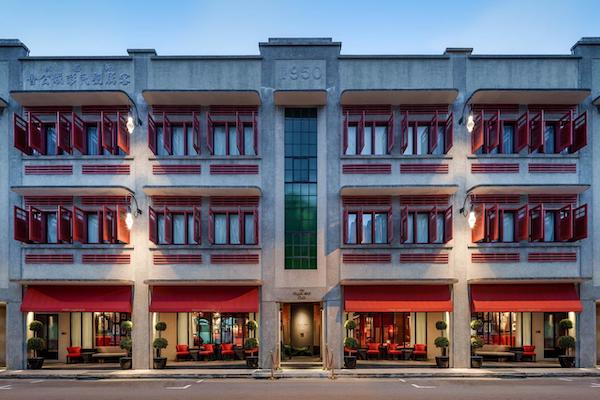 “The art-filled Vagabond Club, with its own “whiskey library,” offers 41 intimate rooms in the heart of Little India and Kampong Glam.” “Spread out and framed in lots of cooling green foliage and colorful splashes of bougainvillea, the hotel is a favorite for heads of states and anyone who appreciates its gorgeous high-ceilinged lobby, old-world grace, many good restaurants, and extensive amenities.”

What are the best neighborhoods to stay in Singapore?
Singapore, with its tropical climate and liberal population and a strong presence of Buddhism, is a financial hub of South-East Asia, attracting tourists from all across the world. With its colonial vestige, it has taken a giant stride in the 21st century.

Sentosa
If you are looking to spend some time on the beach, then this is the place for you. Palawan beach with its delectable eateries and bars is vivacious whereas Tanjong Beach is more tranquil. It has plush beach-front resorts with activities to keep adults and kids both happy.

Marina Bay
The iconic hotel shares its name with the place, and it is a place for those who like excitement and extravaganza. Rooftop bars, celebrity restaurants and luxurious hotels make one spoilt for choices here.

Orchard
Travelling is incomplete without some shopping, and this is the best place for shoppers. A 2 kilometre stretch housing some of the biggest luxury retail brand jostling for space is what one will find here. Juxtaposed against the humongous malls is a UNESCO world heritage site.

Chinatown
Buddhist temples and heritage shops are familiar sights here. But more famous is the food scene here, with delicious street food competing with a fine dining experience in posh restaurants. There are a plethora of hip bars here as well.

Lavender
Also aptly known as Little India, it will take you on a sensory trip with the vibrant scenery and waft of Indian spices as you traverse through the lanes. This place offers a chance to hone your bargaining skills and allows you to feast on traditional Indian cuisine.
Which Singapore hotel offers great views?
If you're looking for a room with a view, then try Hotel Marina Bay Sands or Ritz-Carlton Millenia Hotel. Both hotels offer amazing views of Singapore according to recent customer reviews.
How much does it cost to stay in a Singapore hotel?
For a 3-star hotel you have to pay around $100 per night and for a 4-star hotel you would be looking at $150 per night. If you're after a luxury 5-star Singapore hotel then you can expect to pay around $300 per night.
Which Singapore hotel offers the best rooftop pool?
If you're looking for the best rooftop pool in Singapore try the Hotel Marina Bay Sands or The Fullerton Bay Hotel. Both hotels have excellent customer reviews for their rooftop swimming pools.
Which Singapore hotel is the best for couples?
Try The Fullerton Bay Hotel if you're looking for a romantic getaway in Singapore, it has some excellent recent customer reviews by couples.
We use cookies on this website to analyse your use of our products and services, provide content from third parties and assist with our marketing efforts. Learn more about our use of cookies and available controls: cookie policy. Please be aware that your experience may be disrupted until you accept cookies.