This is a list of the best hotels, hostels, B&Bs and guesthouses in Rio de Janeiro as recommended by the most popular travel experts around the world from CNN, Lonely Planet, Fodor’s, New York Times and more. All the hotel recommendations on the list have been referenced with customer reviews, and we only list hotels which have a review rating of at least 4 out of 5 stars.

Rio de Janeiro or simply known as Rio is the second-most populous municipality in Brazil. Rio is the capital of the state of Rio de Janeiro and part of the city has been designated a World Heritage Site. Called Rio de Janeiro: Carioca Landscapes between the Mountain and the Sea” by UNESCO, the area is one of the most important places in the city.

Rio is a major city in the country, being the home to the headquarters to Brazilian oil, mining, and telecommunications companies. The city is the home of numerous universities and institutes accounting for the second-largest center of research and development in Brazil.

The city is popular for its natural setting such as the Carnival, samba, bossa nova, Balneario beaches such as Barra da Tijuca, Copacabana, Ipanema, and Leblon which generate millions of visitors annually. These beaches make for the perfect getaway for summer and romance.

Rio has several famous landmarks and monuments such as the giant statue of Christ the Redeemer atop the Corcovado Mountain, which is named on one of the New Seven Wonders of the World. The statue has become a symbol of Rio to the world. 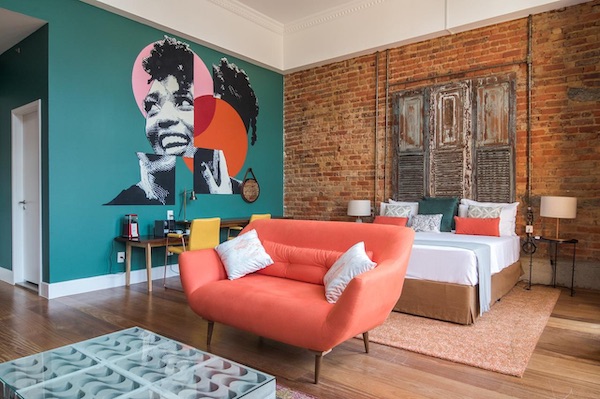 “The first of many planned forays in Brazil by hotel start-up Selina. Lapa Rio de Janeiro resuscitates a classic spot in the city’s nightlife region with a design-led boutique hostel concept that combines stylish individual suites, dorms and co-working, as well as its very own in-house radio station, Lapa 55.” 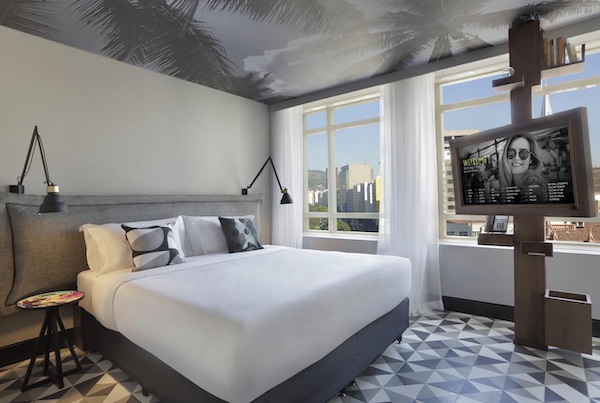 “Halfway between the port area and the South Zone, the funky, Philippe Starck-designed Yoo2 has a prime location for city exploration. The small rooftop pool has great views of the Christ the Redeemer statue in one direction and Botafogo beach in the other.”
Featured in New York Times’ 36 Hours in Rio de Janeiro. 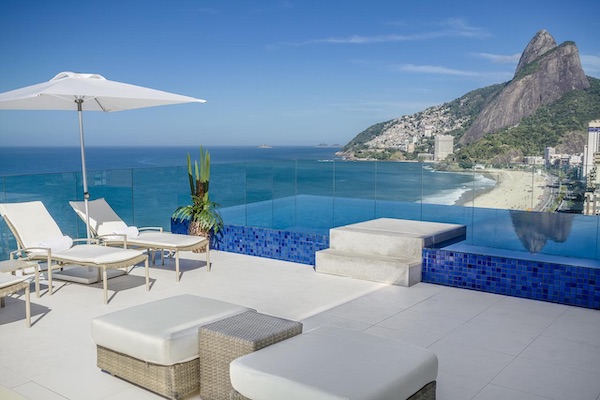 “The clean, spare Praia Ipanema is as close as Rio hotels get to the beach, which is just across the road. All rooms have balconies and superior rooms have ocean views.”
Featured in New York Times’ 36 Hours in Rio de Janeiro.

“On a quiet cobblestone street in a charming corner of Jardim Botânico, Pouso Verde has elegant, comfortably furnished rooms, the best of which have views of Cristo Redentor (Christ the Redeemer). The historic house is packed with artwork.” 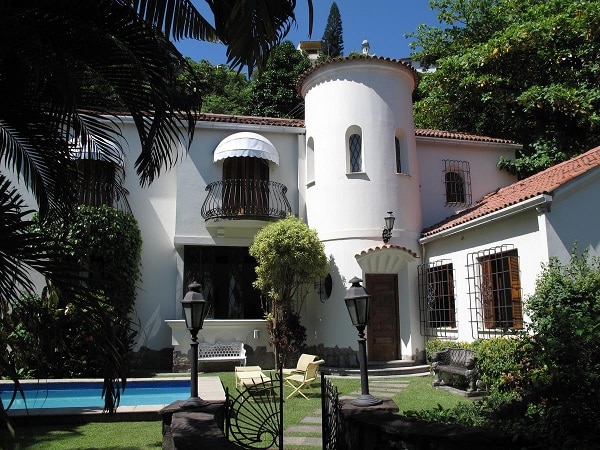 “This lovely property dates back to the 1930s and was once a governor’s mansion. Tropical gardens overlook the picturesque pool, and you can sometimes spot toucans and monkeys in the surrounding foliage.” 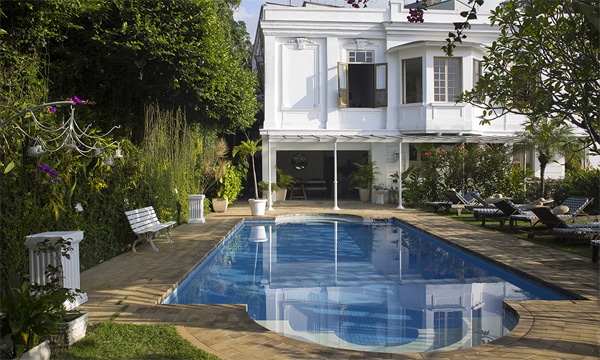 “Seven rooms in a 19th-century mansion in the hilltop neighborhood of Santa Teresa give Mama Ruisa a more intimate feel than its bigger neighbor, the Santa Teresa Hotel. Mama Ruisa’s draws include eclectic décor, an elegant outdoor breakfast (around 50 reais), a garden pool and views of Guanabara Bay.” “Winner of a TripAdvisor Travelers’ Choice Award for 2015, the Miramar has a prime Copacabana beachfront location, walking distance from Ipanema Beach and the subway to get downtown. Though the less expensive rooms don’t face the beach, anyone can take in a panoramic view of Copacabana, including a glimpse of Sugarloaf Mountain, from the rooftop pool and bar.” 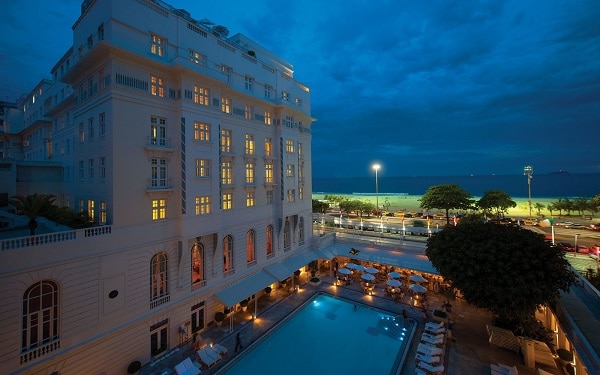 “A piece of Old World elegance amid the allure — and menace — of Copacabana Beach, the Palace, with 232 rooms, completed an extensive renovation late 2012. It promotes itself as a modern property that still conjures the glamour of the days when Marlene Dietrich and Orson Welles were guests.” 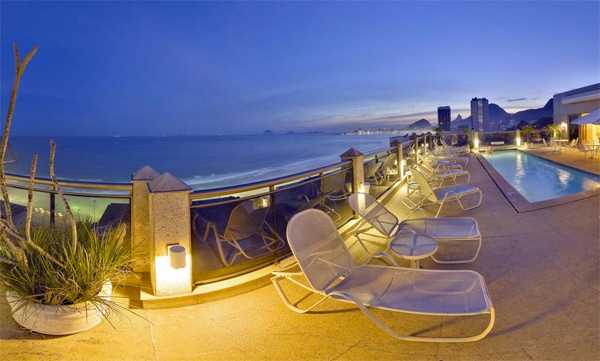 “It’s a high-volume beach hotel two short blocks from Leme, the least-known beach of the Zona Sul. But the view from its rooftop pool rivals anything the five-stars have, and its complimentary breakfasts are well-stocked. Rooms are distinctly modest.” 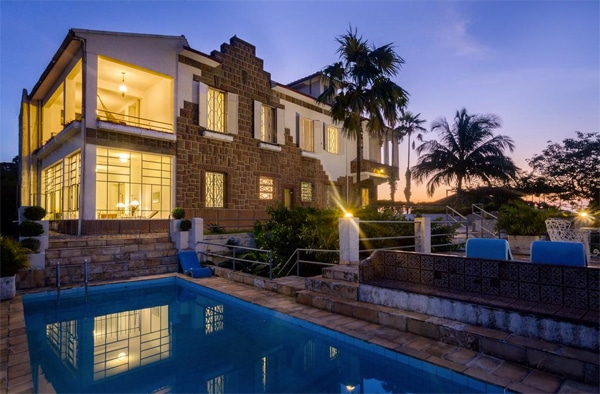 “Perched on a hill overlooking Botafogo Bay in the artistic and quaint Santa Teresa neighborhood, the Rio Panoramic B&B gives you a view of the city below and a vista of islands and Sugarloaf lining the bay.” 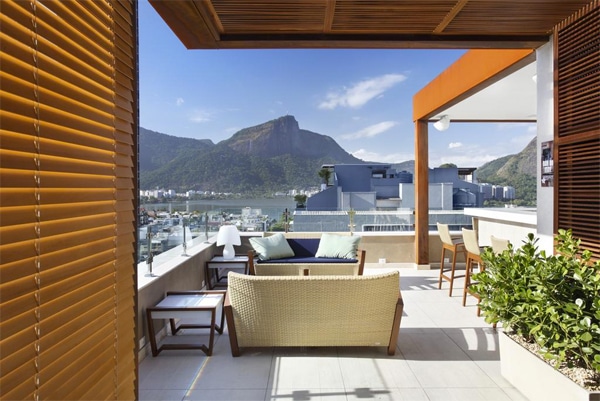 “This stylish boutique hotel has a primo locale, just five minutes from Ipanema Beach and a few blocks from the Rodrigo Freitas Lagoon. The hippest beach hangouts are minutes away, as are a host of the city’s most happening boutiques, restaurants and bars in one of the safest neighborhoods in Rio.” 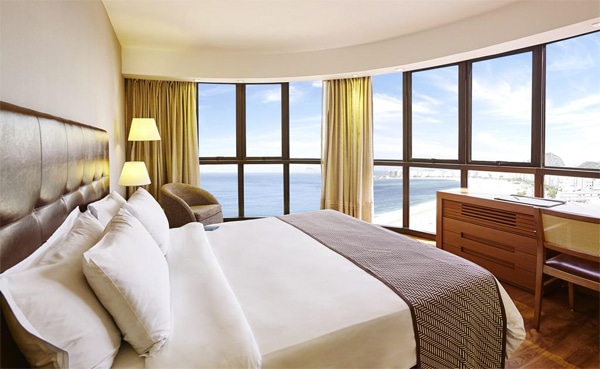 “The Porto Bay Rio gives you a resort-style experience in the heart of beachfront row Avenida Atlantica. The modern, upscale facility pulls out all the stops, from luxurious rooms to fine dining and views up and down the world’s most famous beach.” “This five-star hotel, located in the historic hilltop neighborhood of Santa Teresa, is housed in a regenerated coffee plantation mansion that pays homage to Brazil’s cultures and traditions with folk art and handicrafts from across the nation.” 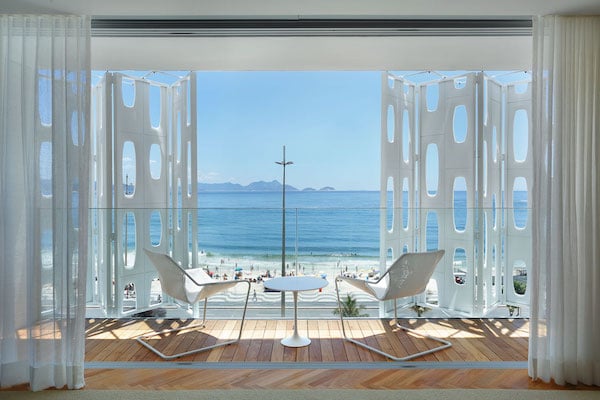 “A welcome new opening and pace on Rio’s Zona Sul. It’s more subtle and modern to contrast the go-go party scene of the Fasano, yet without the sometimes stiffness of the Copacabana Palace. It feels young and sophisticated.” What are the best neighborhoods to stay in Rio de Janeiro?
This flamboyant capital of Brazil is famous for its beaches and the huge statue of Christ the Redeemer looking over its inhabitants.

Ipanema
A very colourful neighbourhood, Ipanema is an extremely inclusive place- a favourite among hippies, and tourists alike. Some of the best shopping opportunities are available here, with exclusive restaurants providing scrumptious meals. You can shake a leg to the tunes of bossa nova. Boutique hotels are located along the beach.

Copacabana
This crescent-shaped beach is famous among locals and tourists alike. It is alive throughout the day and night and is popular for surfing. Casual cafes and bars are found here. Prominent hotels and the Art Deco Copacabana Palace are located here.

Flamengo
This place has a relaxed feel with the largest park in Brazil and art deco architecture. Casual nightclubs are a popular haunt of a more sophisticated crowd. Several old hotels serving cold brews and traditional Brazilian fare are found here.