This is a list of the best hotels, hostels, B&Bs and guesthouses in Prague as recommended by the most popular travel experts around the world from CNN, Lonely Planet, Fodor’s, New York Times and more. All hotel recommendations have been referenced with customer reviews, and we only list hotels which have a review rating of at least 4 out of 5 stars.

Prague is the capital and the largest city in the Czech Republic. The city is also the historical capital of Bohemia. With its temperate climate that includes warm summers and chilly winters, Prague is a top destination for tourists from every part of the world.

Prague has been a political, economic and cultural center of central Europe complete with a rich history. Historically, Prague was the main residence of several Holy Roman Emperors. Prague has been an important city throughout its years over the course of history.

Home to a number of famous cultural attractions, many of these, fortunately, survived the violence and destruction of 20th century Europe. Some of the main attractions in the city include the Prague Castle, Vysehrad, Old Town Square, the Prague astronomical clock and the famous Jewish Quarter. The extensive historic center of Prague has been included in the UNESCO list of World Heritage Sites since the year 1992.

Prague is a major tourist destination as a result of its ten major museums, along with several theatres, cinemas, and galleries. More than 6 million visit the city of Prague annually for its rich cultural history, historical landscape and landmarks. 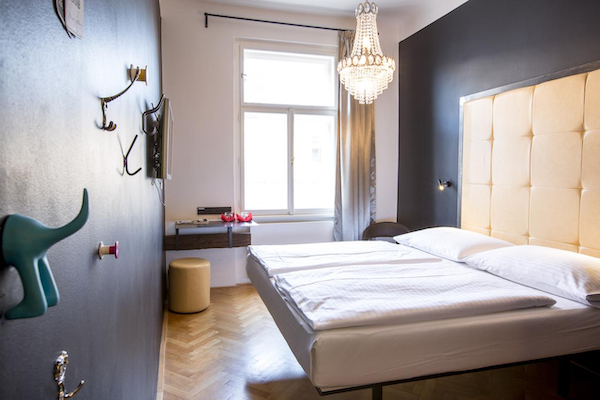 “This upbeat hostel enjoys a fairly convenient location in Vinohrady, a quasi-boutique aesthetic, and a unique mix of dorms, private rooms and apartments that are dotted with designer furnishings and generally devoid of drunken backpacker groups.”

“Pretty much everything in this gorgeous boutique hotel has a designer stamp on it. Appearing on Europe’s trendiest hotels lists, the Icon’s sleekly minimalist rooms are enlivened with a splash of imperial purple from the silky bedspread.” 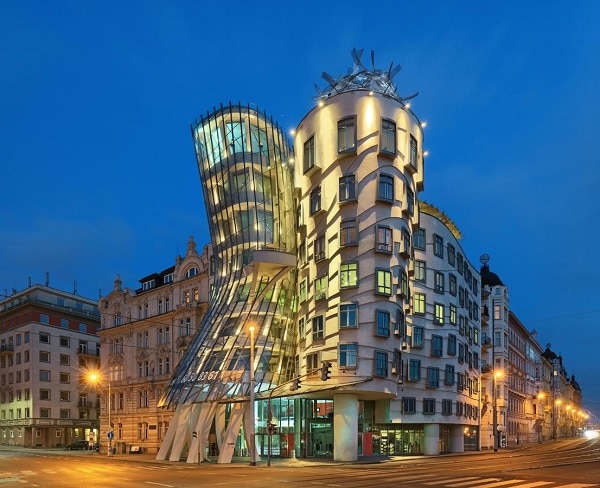 “Last year also saw the arrival of a new Dancing House Hotel. The location along the river and south of Old Town is excellent, though the real pleasure comes from getting to stay inside the landmark riverside building by architects Frank Gehry and Vlado Milunic.” 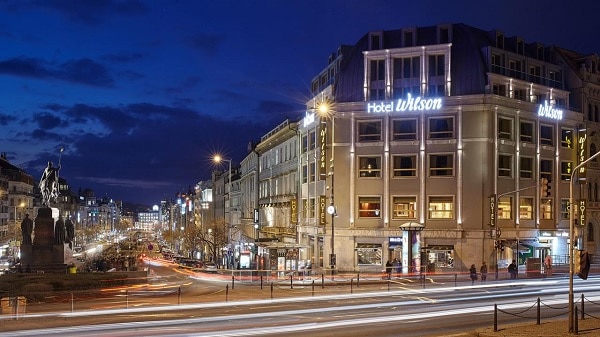 “Part of Spain’s Barceló hotel group, the Occidental Wilson Hotel opened at the top of Wenceslas Square in early 2016, offering 53 rooms in a central location with views overlooking the square, the National Museum and the State Opera.” 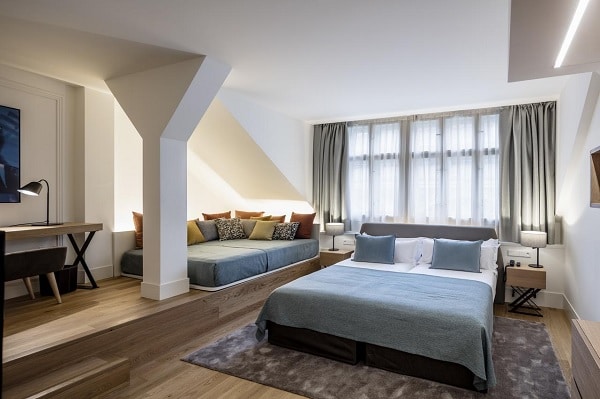 “The 57-room property, which opened in late 2015, offers timeless modern design inside an early 20th-century building. If you are looking for a stylish retreat ideally situated in the center of Prague, this is an excellent option.” 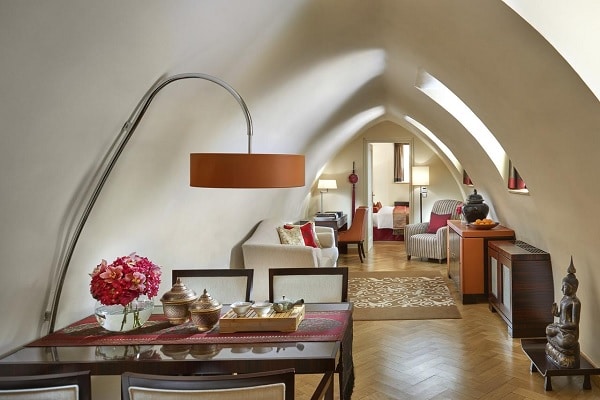 “A blend of four-star hotel and boutique hostel, Mosaic House is a cornucopia of designer detail, from the original 1930s mosaic in the entrance hall to the silver spray-painted tree branches used as clothes racks.” 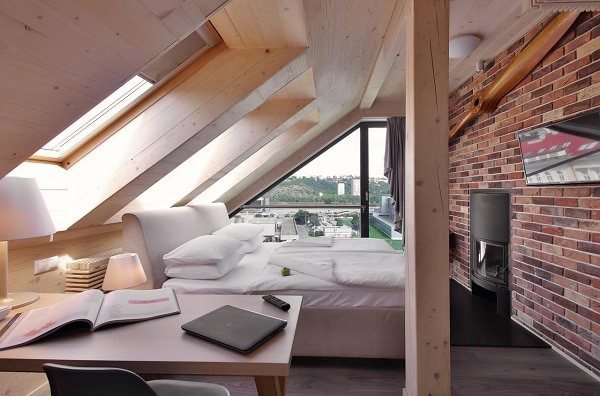 “A highly recommended, eye-catching boutique hotel, the Absolutum is located across from Nádraží Holešovice metro station. While the industrial neighbourhood wouldn’t win a beauty contest, the hotel compensates with a nice list of amenities, including smartly designed rooms with exposed brickwork.” 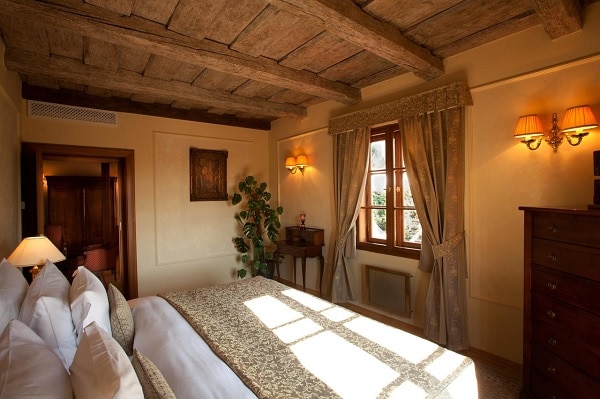 “Consistently rated one of Prague’s best boutique hotels, the Golden Well is hidden away at the top of a narrow side street in Malá Strana. Effectively built into the side of a hill below Prague Castle, the location affords spectacular views of the city.”

Featured as Fodor’s Choice in Prague. 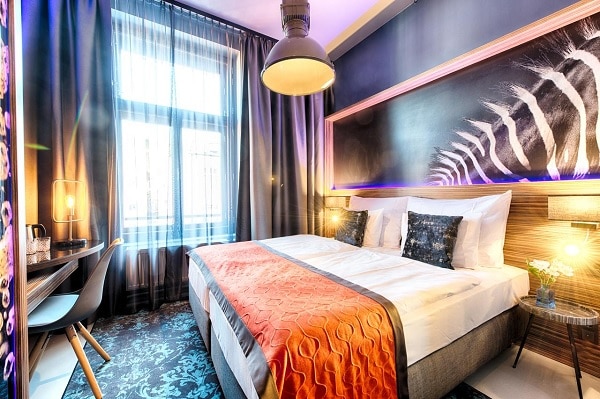 “NYX (formerly Fusion) has style in abundance, from the revolving bar and spaceship-like UV corridor lighting, to the individually decorated bedrooms that resemble miniature modern-art galleries.”

What are the best neighborhoods to stay in Prague?
The capital of Czech Republic, known as “the city of a Hundred Spires”, holds testament to a wonderful history, showcased in its baroque buildings and Gothic churches.

Old Town
This cobblestoned neighbourhood has a number of landmark attractions of Prague. Classical music shows, opera and ballet, provide entertainment to tourists. A 5-storey dance club is popular among the youngsters. Casual cafes and bars are found here with premier hotels providing accommodations to the travellers.

Mala Strana
It is a hillside area with medium, and budget hotels, casual cafes and traditional pubs located here. Along the river, there are fine dining options having a splendid view. Peacocks are ubiquitous and are a special attraction.

Holesovice
Holesovice is an eclectic area of Prague where traditional pubs rub shoulders with contemporary global restaurants. Experimental theatres and edgy clubs attract people to this part of the town. Prague market is known for selling a mixed variety of things ranging from local produce to even food from far off Asia.

New Town
Wenceslas square is where the top hotels and contemporary cafes are located around here. Top designer stores are located here. Chic bars and dance houses are found along the river-front. Premier luxury hotels are located since it is a commercial neighbourhood. The renowned National Theatre hosts acclaimed plays, opera and ballet performances.
How much does it cost to stay in a Prague hotel?
For a 3-star hotel you have to pay around $90 per night and for a 4-star hotel you would be looking at $140 per night. If you're after a luxury 5-star Prague hotel then you can expect to pay around $230 per night.
Which Prague hotel serves great breakfast?
Try the Absolutum Boutique Hotel or The ICON Hotel & Lounges if you're looking for a delicious breakfast at a hotel in Prague. Both hotels have excellent customer review ratings for breakfast.
Which Prague hotels are the best for families?
If you're looking to stay in Prague with your family, then try Golden Well Hotel. The hotel has excellent review ratings by families.
Which Prague hotel offers great views?
If you're looking for a room with a view, then try Dancing House Hotel. The hotel offers amazing views of Prague according to recent customer reviews.
We use cookies on this website to analyse your use of our products and services, provide content from third parties and assist with our marketing efforts. Learn more about our use of cookies and available controls: cookie policy. Please be aware that your experience may be disrupted until you accept cookies.