We list the best hotels, hostels, B&Bs and guesthouses in Portland, Oregon, as recommended by travel experts from CNN, Lonely Planet, Fodor’s, New York Times and more. All the hotel recommendations have been referenced with adequate customer reviews. The ratings you see here is an aggregate from several platforms and is always higher than 4 out of 5 stars. As such, you should have high confidence in our choices.

Known for coffee, hipster culture, and craft breweries, Portland is the largest city in Oregon State of the US. At a population of 653,115, Portland ranks 25th among most populated cities in the US. The city holds the reputation of being the birthplace of James Beard, one of the top culinary masters of the country.

The city appears as a collection of many small towns with a particular focus on environmental friendliness. The large expanse of public parks and the community of bicyclists in the city keep the environment clean. Also, you could find that people prefer to walk in Portland, and the public transportation network is well-built.

A heaven of delicacies

The city of Portland showed rapid growth after 2000 and is known as the ‘City of Roses.’ The nickname is given to Portland because it is suitable for cultivating roses. However, you will find a lot of options to fill up your tummy while exploring Portland. First of all, you get the assurance of fresh ingredients with the mix of many innovative concepts applied by Portland chefs in their delicacies. Also, you can also find many fast-casual diners and food carts to appease your hunger.

Many cultures, one city!

The culture of Portland is quite accommodating of different characters and communities. As discussed before, Portland is made up of different small towns. Therefore, you are bound to find many unique cultures and communities living adjacent to each other. Furthermore, the city promotes an open-minded culture where you can witness many oddball happenings. For example, naked bike rides or an adult soap-box derby isn’t that uncommon in Portland!

If you like our list of best places to stay in Portland, then you should also check out our selection of recommended hotels in New Orleans or the best hotels in Seattle. 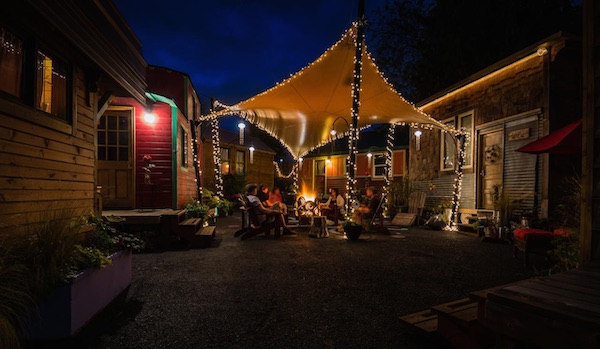 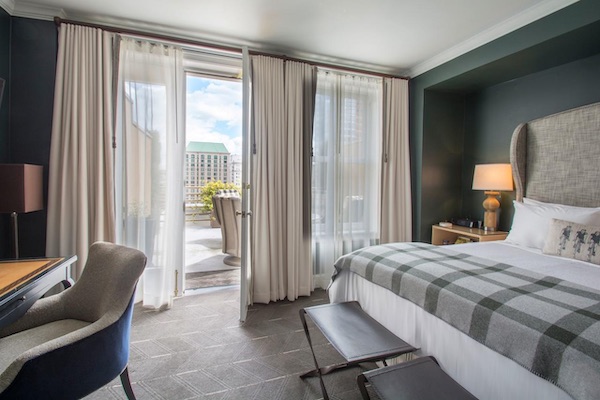 “One of Portland’s oldest hotels, Sentinel is the newest incarnation of former Governor Hotel, the National Historic Landmark where Gus Van Sant filmed My Own Private Idaho.” 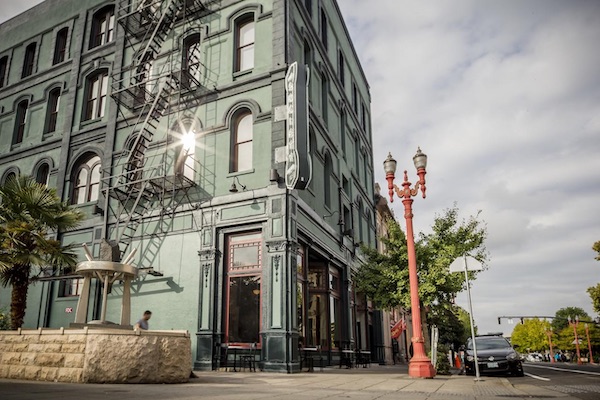 “This pretty hotel in the historic 1881 Mariners Building – originally a lodging house for sailors – has impeccable fashion sense. Options include dorms as well as private rooms. There’s a lively bar and rooftop deck, plus Wednesday wine tastings and drag bingo on Thursday. Some corner rooms have huge windows designed to catch sunlight.” 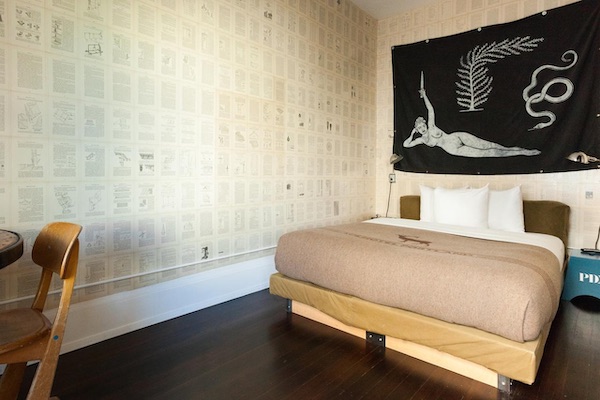 “Located in downtown Portland just a stone’s throw away from the famous Powell’s City of Books, the Ace Hotel is a hipster’s paradise. With a design aesthetic that perfectly blends modern and cozy, this hotel is a favorite with travelers looking for a unique and stylish hotel experience in the heart of the city.” 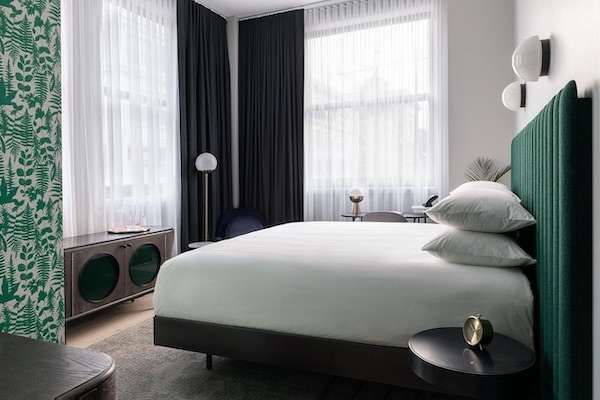 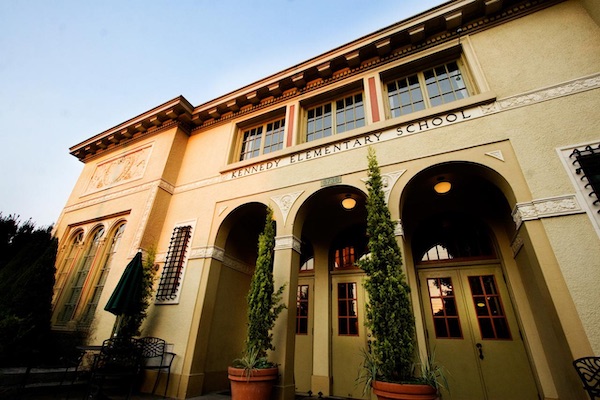 “This former elementary school (built in 1915) has been brought back to life as possibly the most unusual hotel in town. There’s colorful hand-painted art on the walls, a couch-filled movie-theater pub, a brewery, and a saltwater soaking pool outdoors, for starters. Choose from two restaurants, which continue the quirky decorating vibe with paintings and other artwork.” 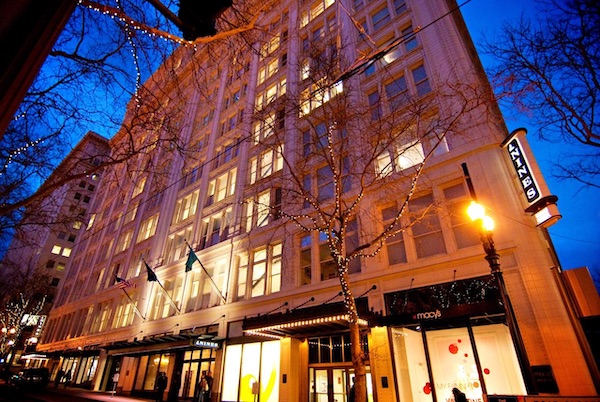 “Located right in the center of downtown Portland and just steps from “Portland’s Living Room” Pioneer Courthouse Square, The Nines Hotel is an elegant, contemporary hotel located in the historic Meier and Frank Building.” 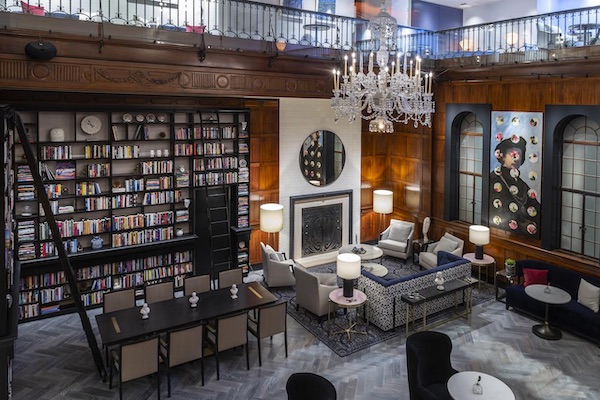 “If you’re looking for a sophisticated travel experience in the City of Roses, look no further than The Heathman Hotel. Located in the heart of downtown Portland, this iconic hotel boasts an impressive art collection, eclectic decor, and a library that would put The Beast to shame.”

Where to stay in Portland?
There is no doubt that Portland is one of the best city in the United States. It has all the sources which help people to live a high-quality lifestyle. However, as this a big city, it can be a little difficult for you to know where to stay in Portland. If you are feeling confused about this, then you have arrived at the best place. In this article, you will get to know about some best neighborhoods in Portland where you can enjoy a better lifestyle. Let’s jump right into this and explore them.

Top neighborhoods to stay in Portland

Pearl District
Pearl District has emerged as one of the best playgrounds for parks, hotels, shops and more. The area has gone through a lot of changes with time, but still, it shows the creative vibes. It is an ideal destination for those who want to experience a perfect stay in Portland. It houses Powell’s City of Books which is the cultural gateway of Pearl District. This is a paradise for book lovers.

Downtown Portland
For the first-time visitor, this can be a perfect place to stay. It is home to famous museums, galleries, locals, and markets. This central location is well connected with different areas across Portland. You can easily travel Pearl District and Hawthorne via public transport or on foot. If you love to try our different foods, then Downtown has a lot of things to offer. Here you can find a lot of street food stalls, food trucks, and hotels. Try out the delicious sandwiches to tacos. In free times, visit the Portland Art Museum. You will definitely enjoy your stay here.

Hawthorne
This neighborhood is located on the southeast side of Portland. With famous vintage shops, theatres, amazing eateries and all, this has become the trendiest neighborhood in Portland. It is the place where you can see Portland’s relaxed and cool side. If you have a limited budget, then you should choose Hawthorne. In Portland, you may not find many hostels, but Hawthorne has some budget-friendly hostels and apartments.

Central Eastside
This is a neighborhood where you can enjoy Portland’s day and nightlife. Famous for its unique coffee culture, it has a lot of bistros and cafes where you can try authentic Portland coffees. Starting from classic to flavored coffee, it has unlimited options for you. Apart from coffee, this is a great place where you can experience the excellent nightlife. Enjoy the night at pubs, clubs, and bars and hit the dancefloors. In other words, nightlife here is electric.

Nob Hill
Are you looking for a fashionable area in Portland? Then Nob Hill is the best for you. It has some famous attractions like tree-lined streets, cafes, Victorian houses, and more. It offers you a village-like environment making it perfect for families. The area is covered with forests, amazing landscapes, and parks.

So, if you are traveling to Portland, then check out these top neighborhoods to enjoy a perfect stay in Portland.
How much does it cost to stay in a Portland hotel?
If you're looking for a 3-star hotel in Portland then you'll have to pay around $190 per night. For a 4-star hotel you have to pay about $260 per night and if you're looking for a luxury 5-star Portland hotel that will cost your about $380 per night.
Which Portland hotel serves great breakfast?
If you're looking to start the day with a great breakfast, then try the Heathman Hotel. The hotel has excellent customer reviews for the breakfast they serve.
Which Portland hotel is the best for families?
If you're looking to visit Portland with your family, then try Caravan The Tiny House. The hotel has excellent recent reviews by families.
We use cookies on this website to analyse your use of our products and services, provide content from third parties and assist with our marketing efforts. Learn more about our use of cookies and available controls: cookie policy. Please be aware that your experience may be disrupted until you accept cookies.