This is a list of the best hotels, hostels, B&Bs and guesthouses in Paris as recommended by the most popular travel experts around the world from CNN, Lonely Planet, Fodor’s, New York Times and more. All the hotel recommendations on the list have been referenced with customer reviews, and we only list hotels which have a review rating of at least 4 out of 5 stars.

Paris is the capital and the most populous city in France. For the last 400 years, Paris has been a major center for finance, commerce, trade, science, music, fashion, painting, and economy of Europe. The city of Paris is a major rail, highway and air-transport hub served mainly by two international airports, Paris-Charles de Gaulle and the Paris-Orly. Paris Charles de Gaulle is the second busiest airport in all of Europe. Paris is also famous for its city subway system and is the second busiest metro system in Europe. Paris’s Gare du Nord is one of the busiest railway stations in the world. All these show that Paris is a major transport hub.

The city is famous and renowned worldwide for its museums and architectural landmarks; it houses the Louvre which is arguably the most popular museum in the world. Two museums, the Musee d’Orsay and Musee de L’Orangerie, are noted for their collection of French Impressionist art.

Some of the most popular landmarks in the city are the world-famous Eiffel Tower, the Grand Palais and Petit Palais, the Arc de Triomphe on the Champs-Elysees and the Basilica of Sare-Coeur on the hill of Montmartre.
Paris is indeed a feast for the eye. 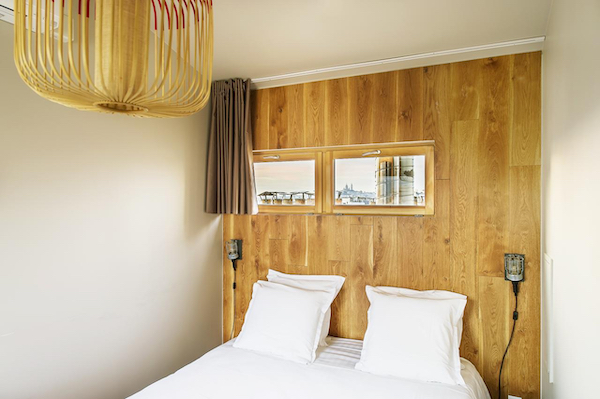 “Redefining hostel living with its striking industrial design, comfortable double rooms and chic wooden-decking rooftop terrace. Ground zero is a spacious, open-plan lounge bar – also reception – that buzzes with local life from the first café and croissant of the day until well into the wee hours.” 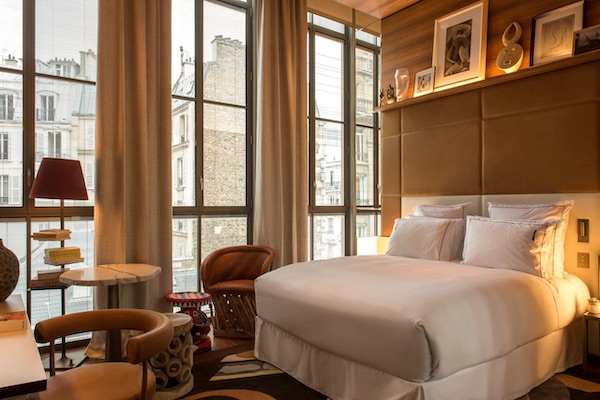 “After a four-year renovation overseen by designer Philippe Starck, the resulting hotel is as much about a lifestyle as it is a place to crash. For one thing, the buzzing restaurant draws fashionable locals from breakfast until the early hours with its patisserie, plates to share, and potent drinks.” 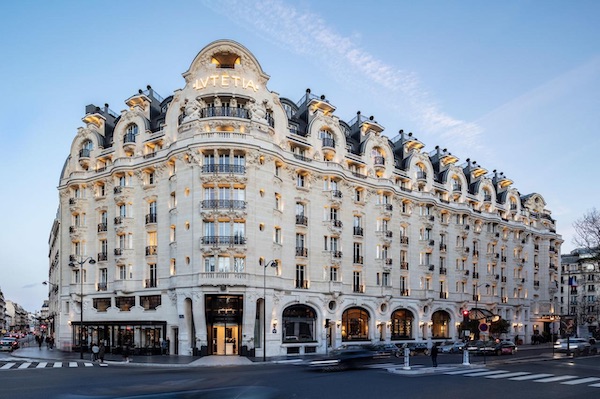 “Determined to honor Lutetia’s glamour, architect Wilmotte cut the room count down to 184 and enlarged the 47 suites, adding Hermès silk throw pillows, Art Deco-style pieces by Poltrona Frau and Statuario marble in the bathrooms; the bigger rooms have balconies with views of the Eiffel Tower.” 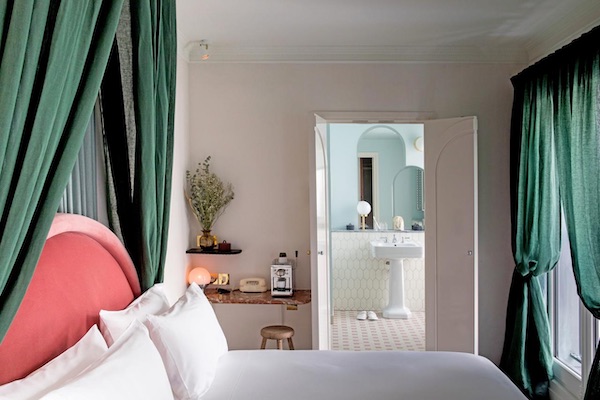 “Staying at this converted 18th-century townhouse places guests properly amongst the muck, and with three bars and restaurants from which to watch the daily life unfold with an elderflower cocktail in hand, naturally.” 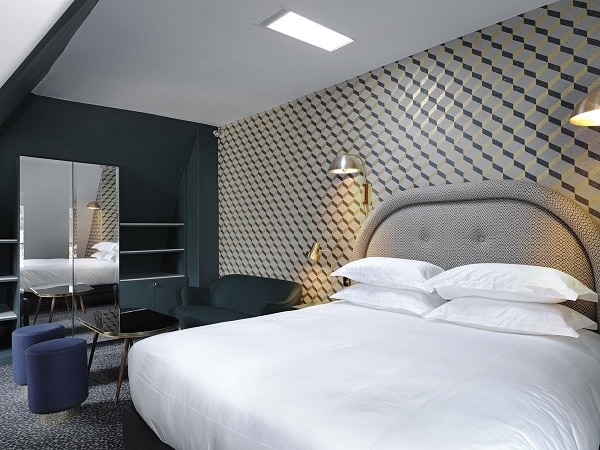 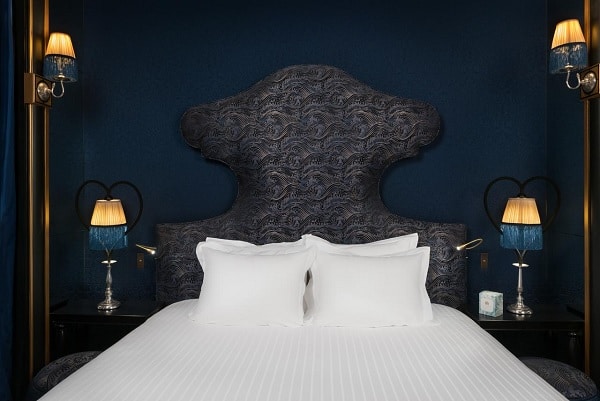 “Maison Souquet, is a renovated former bordello in Pigalle near the Moulin Rouge nightclub. Its Belle Époque salons are decorated with 19th-century furniture and first-edition books; each of its 14 rooms, 6 suites and 2 apartments is named after a famous Parisian courtesan; a hidden door in the basement leads to a pool and massage parlor.” 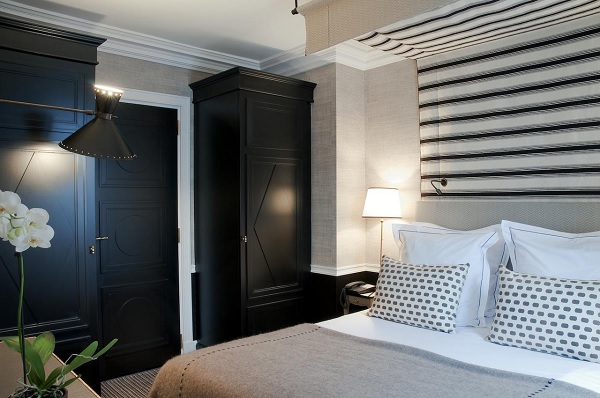 “Tucked behind the newly renovated St.-Sulpice church, the six-story Hôtel Recamier is quiet, chic and sophisticated. The interior designer Jean-Louis Deniot made each of the 24 rooms, ranging from small to spacious, unique. But they all share a soothing, neutral palette.”

“Built in 1827, L’Hotel is the last place that Oscar Wilde resided, and holds a special place in Parisians’ hearts. The discreet and historic five-star hotel has 20 glamorous rooms, including a nearly 600-square-foot penthouse with a terrace a restaurant bar and hammam pool in the basement.” 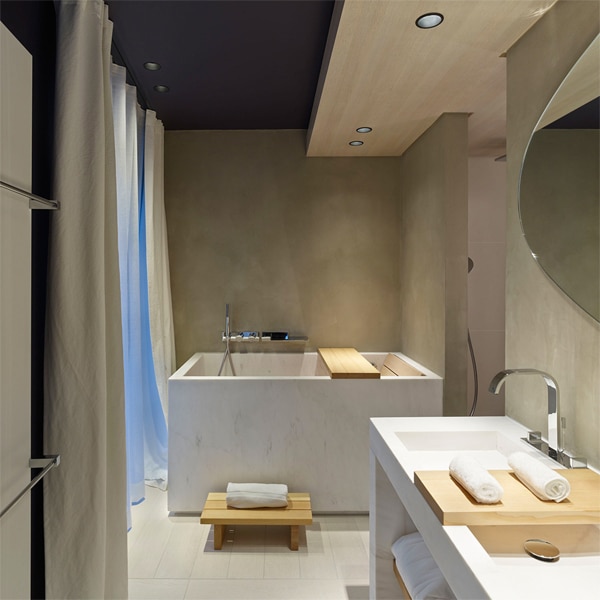 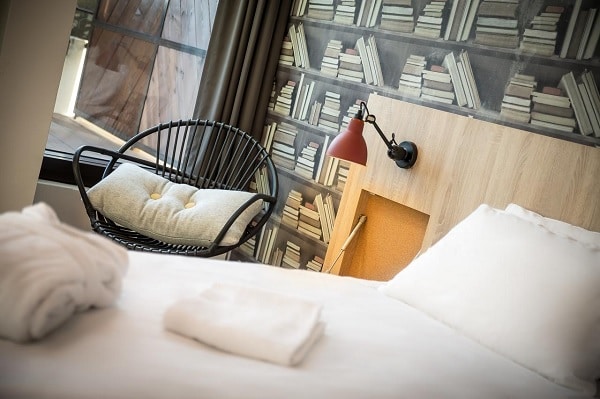 “Its lobby bustling with international guests, Generator Paris offers an affordable mid-tier option for those seeking privacy off the beaten path, and bargain prices for students inseparable from their entourage.” 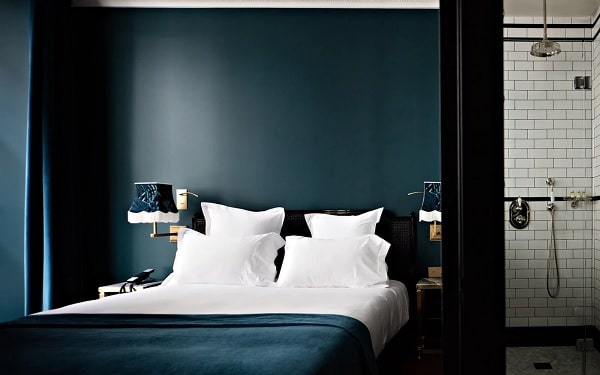 “With its classic-chic design, cozy restaurant and convenient location, the Hôtel Providence is a fashionable and affordable resting spot in one of Paris’s most dynamic neighborhoods.” 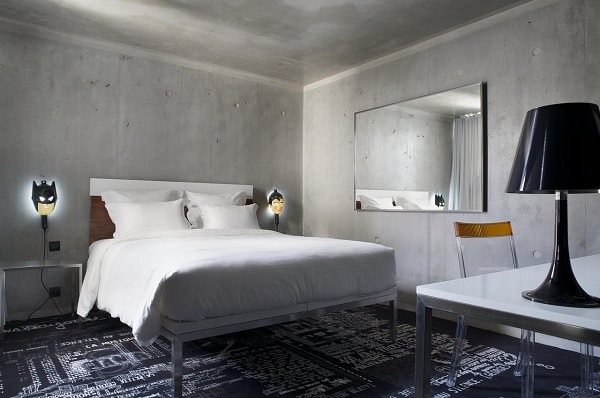 “Mama Shelter has a fun and funky interior designed by Philippe Starck. Don’t expect an ounce of classical Parisian charm—the hotel is an experiment in quirky postmodern countercultural cool.”

Featured as Fodor’s Choice in Paris. “To be king or queen for a day, you don’t have to wake up a pauper. Housed in a 17th-century building, the 17 rooms of this Marais hotel were individually (and flamboyantly) decorated by Christian Lacroix.” “Paris’s first palace hotel continues to offer service, style, and views over the Tuileries and all of Paris in the jaw-dropping top-floor Belle Étoile Suite. A favorite of fashionistas and art buffs.”

Featured as Fodor’s Choice in Paris.

“This Golden Triangle mainstay is difficult to top in terms of luxury, service and price. Capacious guest rooms incorporate styles of different eras for a result that’s a little bit Marie-Antoinette, a touch Joséphine and unmistakably French.” “The Peninsula’s sculpted stone facade — covered in intricate bas-reliefs — was meticulously restored to its former neoclassical splendor. Inside are similarly restored marble, gilt work and 19th-century mosaics, which complement the hotel’s modern artwork and fixtures.” “Interior designer Vanessa Scoffier scoured Paris’ flea markets for over a year sourcing unique pieces, such as Platner chairs and 1950s lighting, to give each of these 32 rooms a one-of-a-kind twist.” 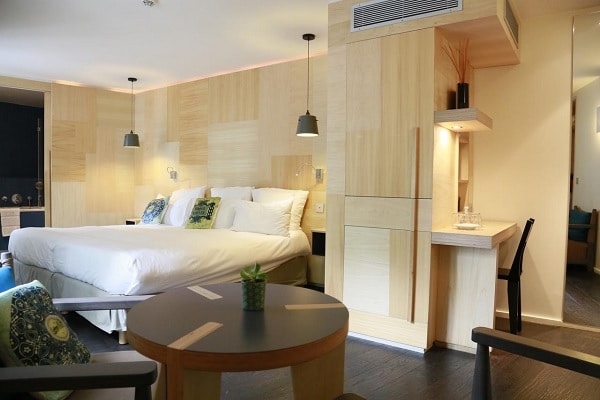 “This alluring 12-room boutique hotel on the banks of Canal St-Martin was the first to bring iPads, filtered water and a warm minimalist design to this once-edgy part of town.” “Twelve playful rooms, each decorated by a different team of artists or designers, await the lucky few who secure a reservation at this former convent/seamstress workshop.” “Hôtel Parister is more reasonably priced than some of Paris’s other stays, and it’s a bargain considering your relative proximity to big-budget landmarks like Palais Garnier. If you’re a design nerd, and get a high off those Mod/mid-century vibes, this is totally and unabashedly right for you.” “A quiet location near a short list of historic sites and cool neighborhoods with thoughtful design, excellent drinks, and dramatically different common spaces make this the new Parisian go-to home base for nomadic creatives.” “Off a small side street in South Pigalle, this boutique hotel is a bit of a Paris unicorn: upscale design, heavy on charm in an ideal location, yet with visitor-friendly rates. In a city like Paris, finding a hotel this lovely, conveniently located, and at these rates is rare. Don’t miss it.” “For that traditional French feeling, book a room at this small, intimate, affordable, and totally romantic hotel, on a lively street in the historic and fashionable Marais.” “The architect-designer Ora Ito and the artist Daniel Buren collaborated on the 106-room Yooma Urban Lodge, a colorful, retro-futuristic hotel that opened last year. In addition to a restaurant, bar and gym, the hotel provides many family-friendly bonuses, from six-person rooms to special baby washrooms and bottle warmers.”

Featured in New York Times’ 36 Hours in Paris on the Seine. “Moored next to the Cité de la Mode et du Design exhibition center (and night life haven), the streamlined and chic 58-room Off Paris Seine is a floating hotel with a popular bar-restaurant.”

Featured in New York Times’ 36 Hours in Paris on the Seine.

What are the best neighborhoods to stay in Paris?
Popular for art, fashion and high-end culture, Paris is the heart and soul of France. It is the most populous city in France and is the perfect amalgam of innovation and creativity. The city of Paris has some worth visiting landmark places. It is the hub of some of the world’s best shopping spots, fashion arcades and art centres and galleries.

Bastille
Bastille is a top notch and affluent locality. Pastries and chocolate desserts are at the heart of this locality. One can enjoy cultural events in this beautiful neighbourhood. L' Opera Bastille is a significant attraction of Bastille.

Haut Marais
This area is one of the oldest parts of Paris. Elegant 17th-century structures, art galleries and organic farms altogether form the area of Haut Marais.

Montmartre
This locality is somewhat unique to Paris. It is the centre of contemporary arts in the city of Paris. The locals of this area are known as ‘Montmartrois'. This hillside locality is full of shopping stops, quaint dining options like Le Miroir. Montmartre attracts a large number of tourists.

South Pigalle
South Pigalle makes for one of the liveliest and hipster localities of Paris. It is the hub of partying and has an eclectic mix of people.
Which Paris hotel offers a great rooftop bar?
Looking for a great view while having a drink? Try Hôtel National Des Arts et Métiers or Hotel The Peninsula, both have excellent rooftop bars with views of Paris.
How much does it cost to stay in a Paris hotel?
Paris is expensive, no news there. For a 3-star hotel you have to pay around $160 per night and for a 4-star hotel you would be looking at $240 per night. If you're after a luxury 5-star Paris hotel then you can expect to pay around $625 per night.
Which Paris hotel serves great breakfast?
Try Hôtel Henriette or Hotel The Peninsula if you're looking for a delicious breakfast at a hotel in Paris. Both hotels have excellent customer review ratings for breakfast.
Which Paris hotel offers great views?
If you're looking for a room with a view, then try Hotel OFF Seine. The hotel offers amazing views of Paris according to recent customer reviews.
Which Paris hotel is the best for couples?
Try Hotel The Peninsula if you're looking for a romantic getaway in Paris, it has some excellent recent customer reviews by couples.
We use cookies on this website to analyse your use of our products and services, provide content from third parties and assist with our marketing efforts. Learn more about our use of cookies and available controls: cookie policy. Please be aware that your experience may be disrupted until you accept cookies.