We list the best hotels, hostels, B&Bs and guesthouses in Montreal as recommended by the most popular travel experts from CNN, Lonely Planet, Fodor’s, New York Times and more. All hotel recommendations have been referenced with customer reviews, and we only list hotels which have a review rating of at least 4 out of 5 stars.

Montreal is the most populous municipality in the Canadian province of Quebec and also ranks as the second-most populous municipality in Canada. The city derived its name from Mount Royal, a triple-peaked hill in the heart of the city. The city has a distinct four-season climate with ranges from warm to hot summers to cold and snowy winters, making it an accommodating for different people accustomed to the different climates around the world.

The city is an important Canadian city in terms of aerospace, transport, finance, tourism, art, culture, food, fashion, gambling, film and world affairs. Montreal is the city with the second-highest number of consulates in all of North America making it an important city of international diplomacy.

Montreal has hosted a number of international conferences and events which has further endeared the city to the world. As of today, it is the only Canadian city to host the Summer Olympics.

The city is home to several sport and entertainment events which see thousands of people entering the city such as the Canadian Grand Prix, the Montreal International Jazz Festival and Just for Laughs festival. 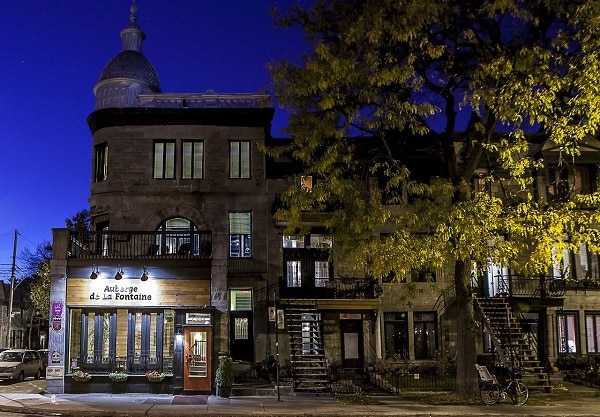 “Situated in the hip Plateau neighborhood, the 21-room Auberge de la Fontaine lies across the street from leafy Parc La Fontaine — home to an outdoor skating rink — and down the street from Lab cocktail bar. Certain rooms have whirlpool baths.” 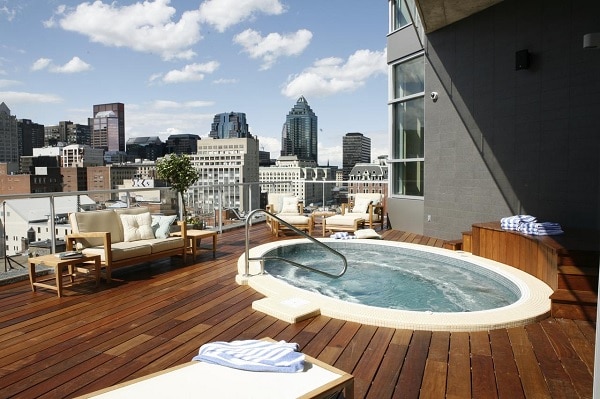 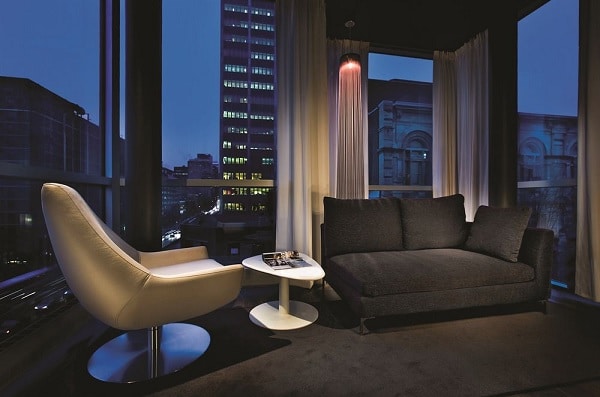 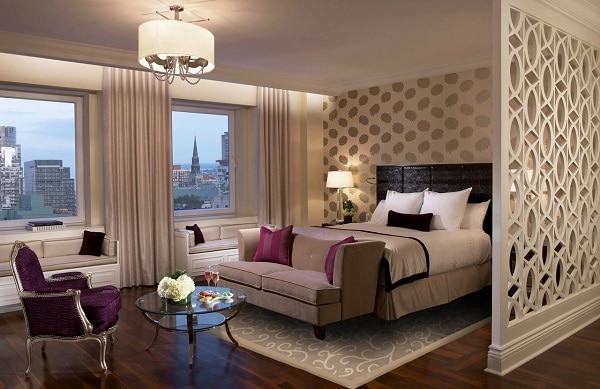 “With its rich history and advantageous location and a knowledgeable staff providing service with panache, the Ritz is an easy pick for travelers looking for style and luxury. Dating back to 1912, this was the first Ritz-Carlton hotel and is where Elizabeth Taylor and Richard Burton wed in the Royal Suite in 1964.” 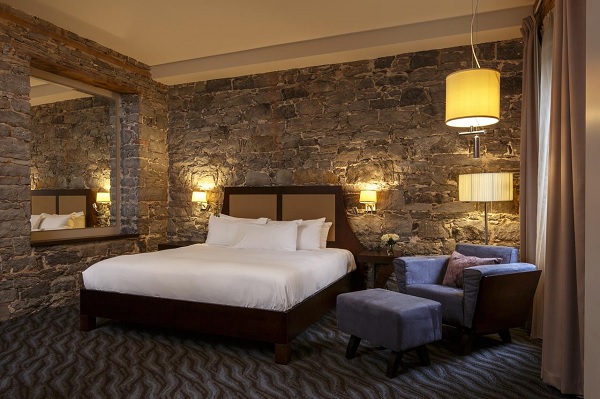 “There’s a cultivated air of refinement echoing through this landmark, named after Québec’s most passionate poet, Émile Nelligan. The hotel marries Old World charm with a sleek, updated sensibility.”

Featured as Fodor’s Choice in Montreal. 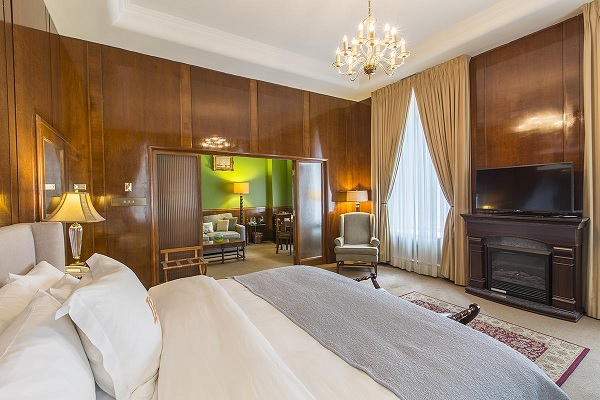 “Inside a grand 1870 building, LHotel is a major draw for art lovers. Georges Marciano, founder of Guess jeans, opened the hotel in 2010, showering great artworks throughout the rooms and common areas.” 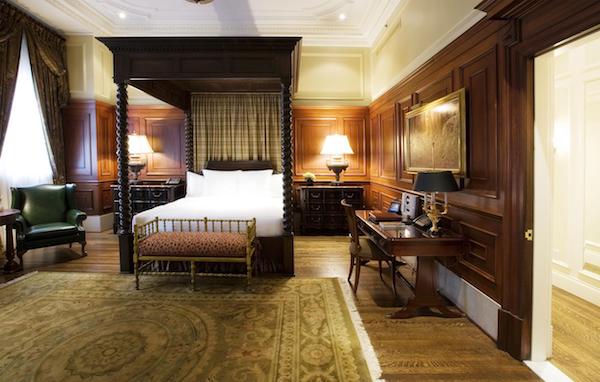 “In a word, gorgeous. Montréal’s surge of designer hotels spans the spectrum from minimalist to ornate, and Le St-James sits squarely at the ornate end of the range.” 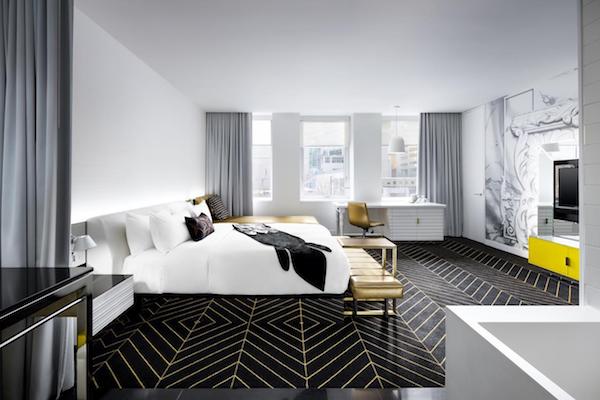 “Combining contemporary decor with in-house nightlife and attentive service, the W brand is unique on the hotel landscape, and the Montréal property follows suit.” 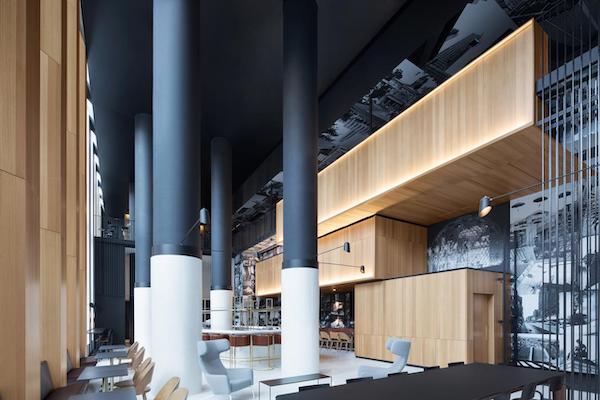 “The modern new Hôtel Monville near Old Montreal has 269 loft-like rooms with window walls, a lobby papered in black and white photos of city landmarks, staff uniforms designed by the local brand Frank and Oak and room service delivery by robot.” 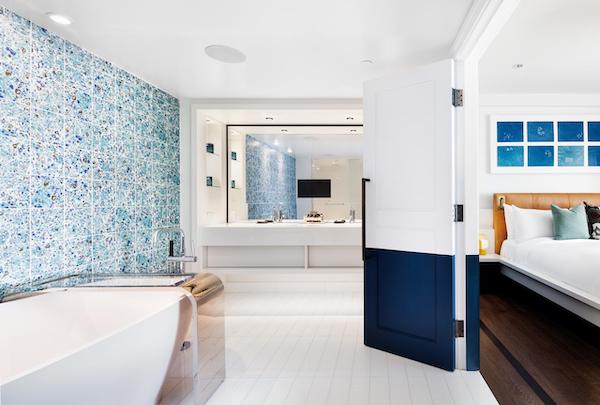 “Newly renovated, the 950-room Fairmont the Queen Elizabeth now has a trendy lobby bar, Nacarat, and a gourmet food court, Artisans. Guests can splurge on room 1742, the room where John Lennon and Yoko Ono staged their 1969 “bed-in” protest of the Vietnam War, newly decorated in period style.”

Mile End
Mile End is a neighborhood that is linguistically and ethnically diverse where one can hear French, English, Portuguese, Italian, and other languages. The neighborhood gives off artistic vibes that resulted in formation of bands such as Animals, Plants, Grimes, and Arcade Fire.

Le Plateau
Le Plateau is a former working-class area that transformed into an artistic and trendy neighborhood, which is becoming more and more gentrified. The neighborhood has a wide range of trendy bars, cafes, restaurants, shops and bakeries that gives youthful and bohemian vibes.

Vieux Montreal
Vieux Montreal is one of the most tourist-friendly neighborhoods in Montreal that is home to diverse galleries, shops, beautiful architecture that dates back to the 17th century and narrow streets cobbled with stones.

Quartier Latin
Quartier Latin is neighborhood that is home to a large number of theatres, restaurants, bars and other hangouts. It is located next to the Université du Québec à Montréal (UQAM) campus and is a vibrant and energetic area.
Which Montreal hotel serves great breakfast?
Try Auberge de la Fontaine if you're looking for a delicious breakfast at a hotel in Montreal. It has excellent customer review ratings for breakfast.
How much does it cost to stay in a Montreal hotel?
For a 3-star hotel you have to pay around $100 per night and for a 4-star hotel you would be looking at $170 per night. If you're after a luxury 5-star Montreal hotel then you can expect to pay around $270 per night.
Which Montreal hotel is the best for couples?
Try The Ritz Carlton Hotel if you're looking for a romantic getaway in Montreal, it has some excellent recent customer reviews by couples.
Which Montreal hotels are the best for families?
If you're looking to stay in Montreal with your family, then try The Ritz Carlton Hotel. The hotel has excellent review ratings by families.
We use cookies on this website to analyse your use of our products and services, provide content from third parties and assist with our marketing efforts. Learn more about our use of cookies and available controls: cookie policy. Please be aware that your experience may be disrupted until you accept cookies.