This is a list showing the best hotels, hostels, B&Bs and guesthouses in Miami which are recommended by the most popular travel experts around the world from CNN, Lonely Planet, Fodor’s, New York Times and more. All hotel recommendations have been referenced with customer reviews, and we only list hotels which have a review rating of at least 4 out of 5 stars.

Miami is a major city on the Atlantic Coast of South Florida and holds the distinction as the second-most populous metropolis in the Southeastern United States. Miami is a major center and a leading city in finance, commerce, culture, media, and entertainment. The city is also an important city in arts and international trade and holds a great reputation for its hospitality.

Miami is regarded as an alpha world city and ranks highly in several indexes; it is the seventh-highest ranked US city among global cities in terms of business activity, human capital, information exchange, cultural experience and political engagement.

The city was described by Forbes as America’s Cleanest City making it a very livable city. It has a year-round good air quality, vast green spaces, and vegetation, clean drinking water, clean streets and city-wide recycling programs; all identifiers of its good standard of living and good quality of living. This also makes it further an attractive tourist destination. The city is famous for its Cuban-American plurality; it is the largest city regarding this.

The city has a beautiful skyline with over 300 high rises and ranks as the third-highest skyline in all of US. Downtown Miami is home to the largest concentration of international banks in the United States making it an important financial center. 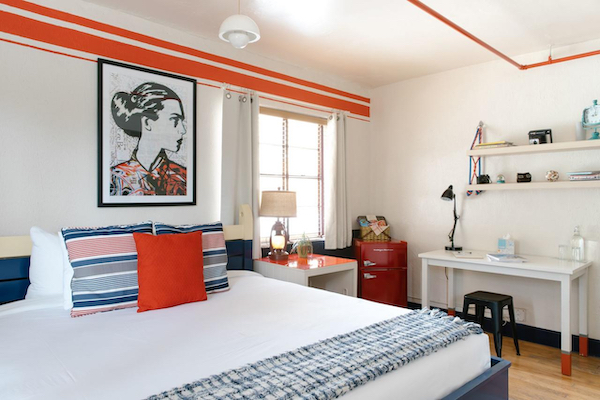 “This hip hotel-hostel with both private and shared rooms anchored by Broken Shaker, Miami Beach’s most popular cocktail bar, is something of an anomaly; at once one of Miami’s trendiest and most affordable hotels. There is a lush, inviting courtyard and pool courting Miami Beach locals, as well as 27 Restaurant.” 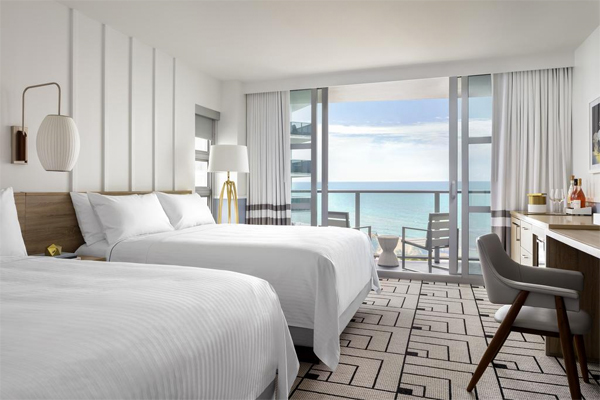 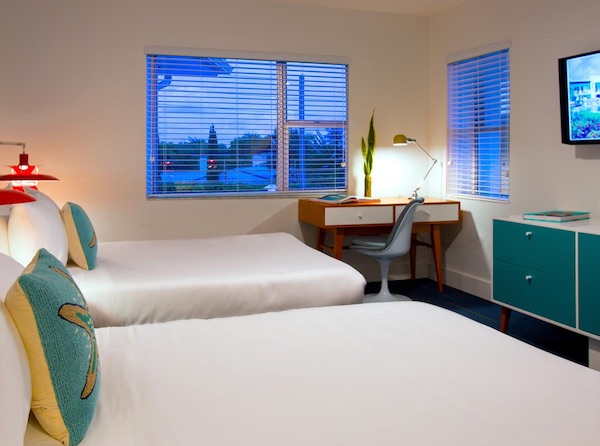 “If you don’t need to be within walking distance of the sand and surf, consider the mainland’s Vagabond Hotel, a 1950s roadside inn given a retro-chic overhaul.”
Featured in New York Times’ 36 Hours in Miami. 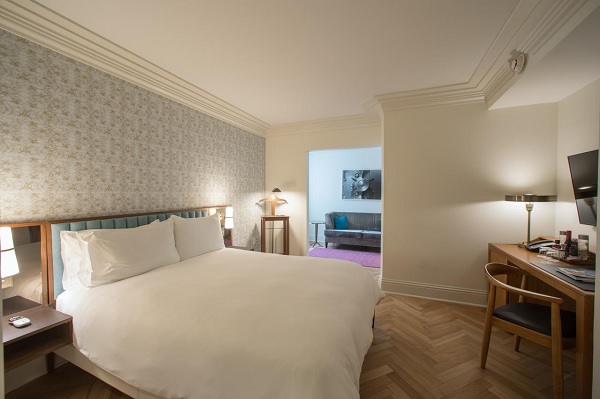 “Set in a beautifully restored 1925 beaux-arts high-rise, the Langford opened to much fanfare in 2016. Its 126 rooms blend comfort and nostalgia, with elegant fixtures and vintage details, including white oak flooring and glass-encased rain showers.” 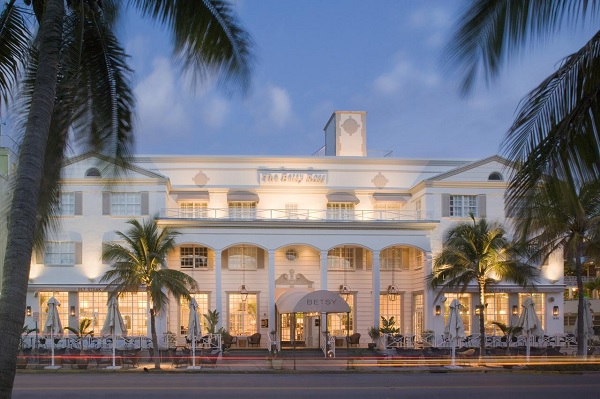 “One of South Beach’s finest hotels, the Betsy has a classy vibe with excellent service and first-rate amenities. The historic gem has two wings, with rooms set in either a colonial style or an art-deco aesthetic.” 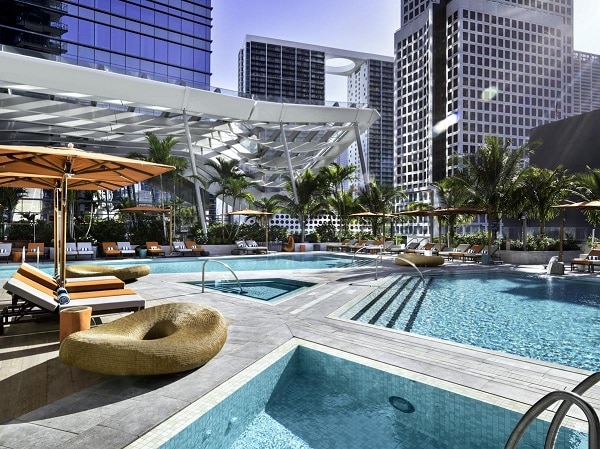 “For those opting out of South Beach there’s East, Miami in Brickell with eye-catching geometric lines designed by the local architecture firm Arquitectonica. Billed as a lifestyle hotel, it houses a series of dining venues, including a coffee shop, an Asian-themed rooftop bar and a fifth-floor restaurant called Quinto La Huella, the first international outpost of Uruguay’s renowned La Huella seaside grill.” 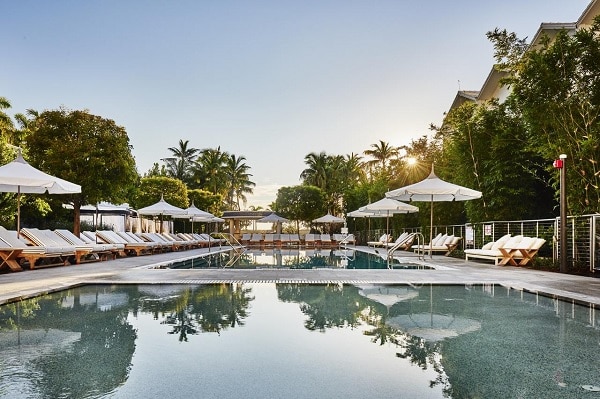 “The recently restored Nautilus, a Sixty Hotel, on Collins Avenue, was originally built in the 1950s by the neo-Baroque architect Morris Lapidus. Its contemporary lobby features nods to the era, with semicircular velvet sofas and gilded accents. Behind it is a saltwater pool with a garden leading straight to the beach.” 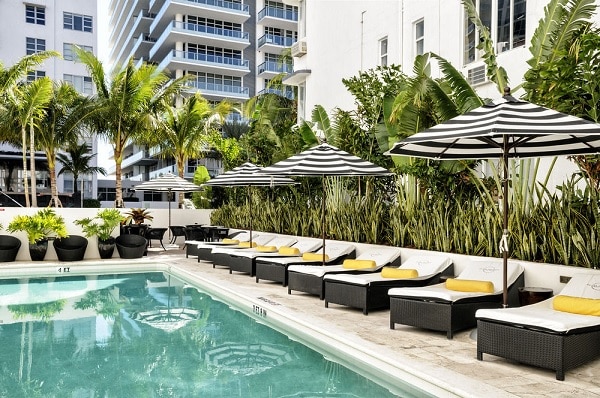 “The Hotel Croydon is a reasonably priced, convenient and comfortable option with perks that make choosing it worthwhile. Two selling points are the outdoor spaces: the pool on the ground floor and the spacious roof deck, which offers views of the ocean and the surrounding city.” 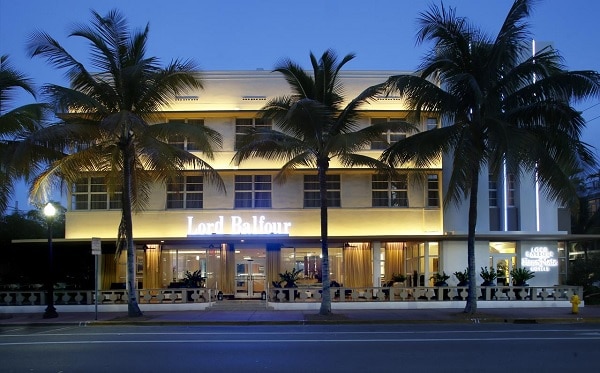 “Despite the stylish décor and classy location, the Lord Balfour is low on stuffiness. Service is friendly. Glitz is minimal. Clientele was composed mainly of what looked to be upper-middle-class families and couples rather than the jet-setters who frequent the five-star palaces farther up South Beach. If you don’t demand pomp or pampering, Lord Balfour is a charming host.” 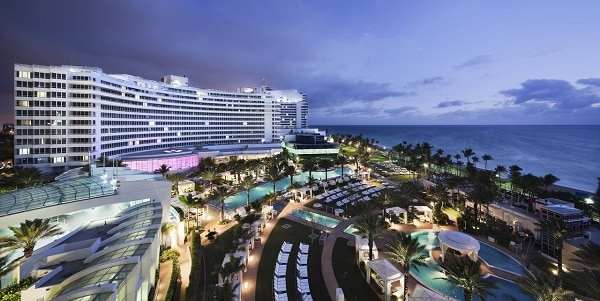 Featured as Fodor’s Choice in Miami. “A 50-room hotel tower annexed to the grounds of a members-only club, Soho Beach House offers a quiet, intimate take on the best of Miami experience. With the exception of the courtyard restaurant Cecconi’s, on-site amenities here are off-limits to the general public.” 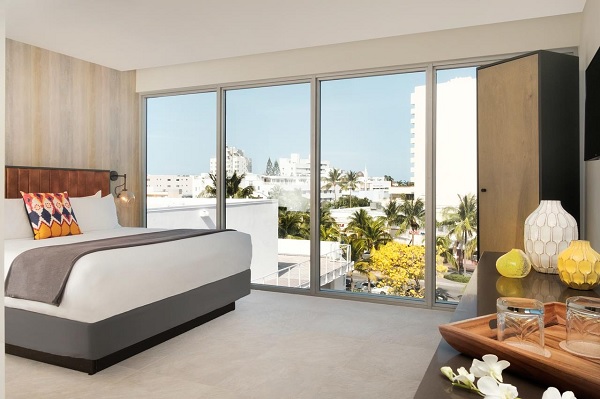 “In a great location two blocks from the beach, the Washington Park is spread among five beautifully restored art-deco buildings fronted by a pool and a palm-fringed courtyard.” 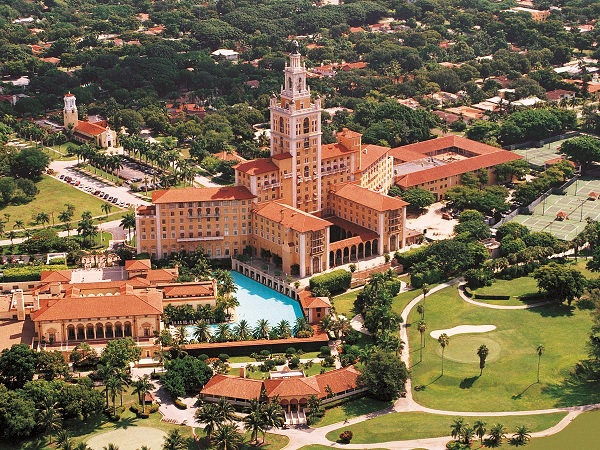 “The imposing neo-Spanish-colonial pile, rising regally over a 150-acre Coral Gables spread and dating back to city founder George Merrick’s original plan in 1926, has seen a lot of history since, to this day regularly hosting heads of states, CEOs, and celebrities.” “If you’re looking for seclusion and don’t mind paying top dollar for it, The Surf Club is a wonderful option, and more centrally located than the many luxury resorts you’ll find in Sunny Isles Beach.” “There are by now an awful lot of pretty great—even splendid—luxury hotels throughout Miami’s Brickell Avenue/financial/office district just south of downtown. But the one I still find among the most contemporary Miami in spirit is the cool wedge-shaped property a quick pop over the bridge on Brickell Key.”

What are the best neighborhoods to stay in Miami?
Miami is a global city located at the southeastern U.S. state of Florida. The city is home to the famous South Beach and is renowned for trendsetting nightclubs, surfside hotels, white sand, and colorful art deco buildings. Some of the best neighborhoods in Miami are:

Brickell
Brickell is a neighborhood that is the financial district of the city and also has a vibrant nightlife and entertainment scene. The neighborhood is home to many pubs and bars such as Blackbird Ordinary, Sidebar, La Moon, El Tucan, among others. The neighborhood has shopping centers such as Pandora, Lululemon Athletica, Chopard, AllSaints, and Agent Provocateur.

Coconut Grove
Coconut Grove is a neighborhood that is home to several great restaurants such as Sky Lounge, Panorama Restaurant, Plant Food + Wine, and Peacock Garden Café. The restaurants offer great margarita and seafood and gives out romantic and laid-back vibes.

Coral Gables
Coral Gables is a neighborhood that is full of lush greenery filled with flowers, trees, and other natural elements that renders it a garden type of look. The area features old Spanish architecture and several restaurants, bars, pubs, cafes, bookstores, and many more places.

Downtown Miami
Downtown Miami is a neighborhood that is located near waterfront. The neighborhood is the home to several landmarks such as Olympia Theater that is the city’s historic performing arts center, The Moth that is a live event where people come on stage to tell stories, Fratelli Milano that is a romantic and quaint restaurant and Jar + Fork a healthy restaurant that serves cold-pressed juices, delicious wraps, and salmon curry bowls.
Which Miami hotel offers a great rooftop bar?
Looking for a great view while having a drink? Try Hotel East or Eurostars Langford Hotel, both excellent rooftop bars with views of Miami.
How much does it cost to stay in a Miami hotel?
Staying in Miami Beach isn't cheap. For a 3-star hotel you have to pay around $160 per night and for a 4-star hotel you would be looking at $300 per night. If you're after a luxury 5-star Miami Beach hotel then you can expect to pay around $550 per night.
Which Miami hotel offers great views?
If you're looking for a room with a view, then try Hotel East or Hotel Mandarin Oriental. Both offer amazing views of Miami according to recent customer reviews.
We use cookies on this website to analyse your use of our products and services, provide content from third parties and assist with our marketing efforts. Learn more about our use of cookies and available controls: cookie policy. Please be aware that your experience may be disrupted until you accept cookies.