We list the best hotels, hostels, B&Bs and guesthouses in Memphis, Tennessee as recommended by travel experts from CNN, Lonely Planet, Fodor’s, New York Times and more. All the hotel recommendations have been referenced with adequate customer reviews. The ratings you see here is an aggregate from several platforms and is always higher than 4 out of 5 stars. As such, you should have high confidence in our choices.

The city of Memphis is situated on southeastern Tennessee of United States. The city is on the bluffs of Chicksaw above the river of Mississippi. Here, three borders meet, namely, Arkansas, Tennessee, and Mississippi. As a matter of fact, the city of Memphis has the largest population in Tennessee. Other than West Memphis, and Arkansas, the central suburbs of Memphis includes Arlington, Collierville, Bartlett, Germantown, Millington, and Lakeland. Besides, Horn Lake, Southaven, Olive Branch are also some significant areas.

Speaking of the history of Memphis, Hernando de Soto, a Spanish explorer visited it in the year 1541. Further, Spanish came in the year 1795, and the US was said to build Fort Adams in the place. However, the city of Memphis was found in the year 1819, which Chickasaw Indians previously inhabited. Additionally, among the founders were the US president, Andrew Jackson. Interestingly, the name “Memphis” was taken from the ancient city of Egypt.

The city, Memphis saw rapid growth after cotton came into being in the southern Memphis. Furthermore, the town became a trade center for cotton around 1870. Sadly, yellow fever prevailed in the city around the same time, which devastated it.

Because the city is situated in the central location, it is regarded as a hub in the US. As per matter of fact, it has a second-busiest cargo airport in the world. Also, it has the country’s largest river ports. Connectivity includes railways, highways that are well built. And, it accounts for a significant part in the economy of the US. It is a prominent city for music, nightclubs, restaurants, shops, and attractions.

If you like our list of best places to stay in Memphis, then you should also check out our selection of recommended hotels in Nashville or the best hotels in New Orleans. 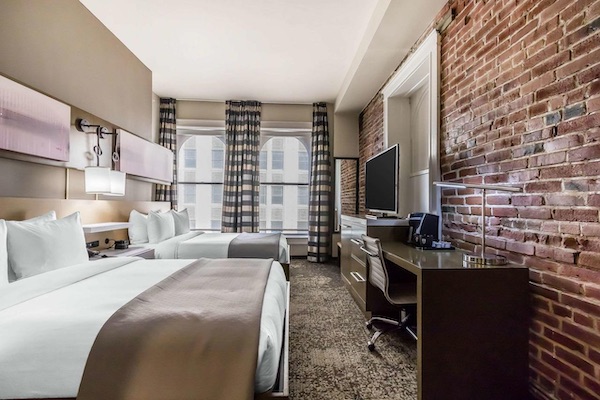 “The 1902-vintage Winchester office building has recently been repurposed as the Hotel Napoleon Memphis with 58 crisp rooms. In addition to its pedestrian-friendly downtown location, the hotel houses a restaurant serving breakfast and dinner, and offers free coffee anytime in the lobby.” 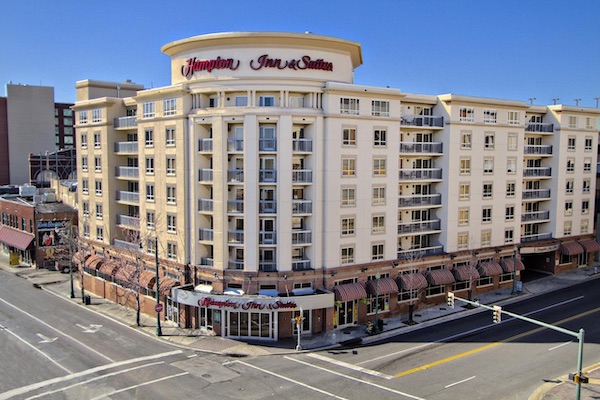 “Hampton Inns used to just be budget options, but in recent years they’ve become more boutiquey, but without the big price tag. Everything about this hotel is reliable (including the service) and convenient (particularly the location). You’ve gotta love a hotel that doesn’t try to nickel-and-dime you, and it’s hard to beat getting freebies like the Wi-Fi and the breakfast.” 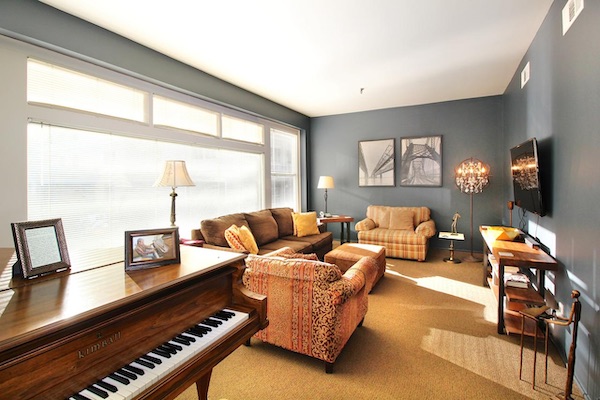 “Inconspicuously located on the 2nd floor of a busy downtown street, this unique, cheerful guesthouse is one of Memphis’ best-kept secrets. Spacious suites, all with recently modernized bathrooms, are more like hip studio apartments than hotel rooms, with Asian rugs, funky local artwork and kitchens stocked with (included!) snacks.” 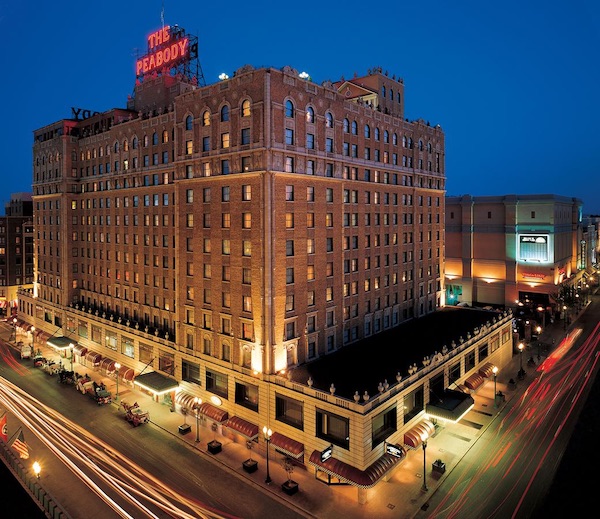 “Even if you’re not staying here, it’s worth a stop to see this 12-story downtown landmark, built in 1925. The lobby has the original stained-glass skylights and the travertine-marble fountain that is home to the hotel’s resident ducks.”

Featured as Fodor’s Choice in Memphis. 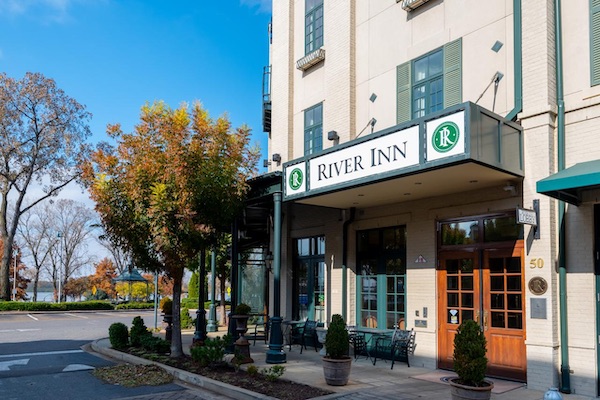 “It’s been around since 2007, but River Inn still manages to fly under the radar, and in fact, many Memphians don’t even know it’s there. On the banks of the river, in the yuppie waterfront community of Harbor Town, this boutique hotel feels very European: it’s perfect for an anniversary or other romantic occasion.” 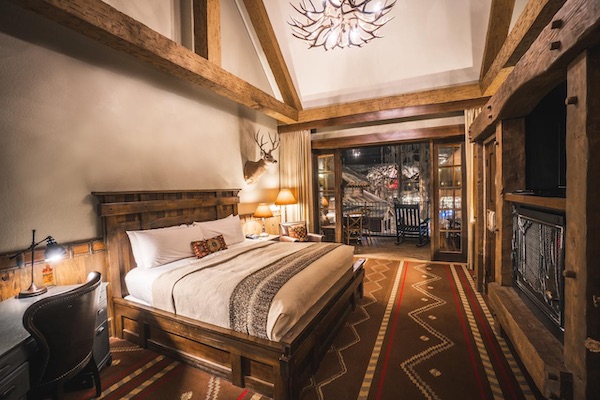 “The Mississippi riverfront glass pyramid that last served as a basketball arena has been refashioned as an immersive Bass Pro Shop, complete with fish- and gator-filled ponds. Overlooking them and the indoor cypress swamp diorama is the rustic-themed, 103-room Big Cypress Lodge.”

Where to stay in Memphis?
The largest city in Tennessee, Memphis, is located near the world-famous Mississippi River’s southwest side. It is known for its musical legacy in a different genre. Even though Memphis is a small city, its neighborhoods can vary greatly based on their unique amenities and atmosphere. So, how to find a perfect place to stay in Memphis? Well, this piece of article can help you with this. Let’s explore more about some of the best neighborhoods in Memphis.

Downtown Memphis
It is the oldest part of Memphis and houses some historical architectures of the 19th century, especially in Victorian Village. It also has the Memphis tallest building which is around 430 feet tall. Besides, it is also known as the business district of Memphis. You can find a lot of restaurants, shops, cafes and more. When it comes to enjoying the nightlife, this is the place for you. Talking about transportation facilities, the place is well connected with major places of Memphis. So, it is the best place in the city where you can enjoy a great stay.

Midtown Memphis
It is treated as the quitter area of Memphis. It is home to some major cultural attractions, landmarks, and some famous educational institutions. Talking about its cultural attractions, it houses some theaters, playhouses Art museums and more. If you love shopping, then here you can find a lot of shops, boutiques and more. On the other side, you can easily travel to a different place by public transports.

Cooper-Young
This is a residential neighborhood in Memphis which houses a diverse mix of families and artists residents. Here you can see old-styled bungalows. Want to enjoy the authentic Memphis coffee? Well, in Cooper-Young you can easily locate some best coffee shops and restaurants. This is a place for those who want to enjoy a peaceful stay in Memphis. Visit here and witness the unique experience. The place is right for culture vultures, families, foodies, shopaholic, and for those who are visiting Memphis for the first time.

West Memphis area
It is considered as an independent town of Memphis and is a significant part of the city’s metropolitan area. Located on the Mississippi River’s west side, it houses various low-budget hotels and hostels. So, you don’t have to worry about your budget while looking for a hotel in this district. Visit the riverside, and you can have a great view of Memphis skyline. As it is cheaper are, it attracts visitors with a low-budget.

East Memphis area
It is the largest district of Memphis and has a peaceful environment. The neighborhood is well-known for its shopping streets and family residentials. The eat-west side of East Memphis has a lot of offices and shops where you can have a great shopping experience. If you are a food lover, then this is the area for you. You will not face any problem in finding a fast-food hotel to the best restaurant.