Here, we list the best hotels, hostels, B&Bs and guesthouses in Geneva as recommended by the most popular travel experts around the world from CNN, Lonely Planet, Fodor’s, New York Times and more. All hotel recommendations have been referenced with customer reviews. The ratings you see here combines ratings from several platforms and are always higher than 4 out of 5 stars.

Geneva is the second-most populous city in Switzerland and the most populous city of the Romandy region of Switzerland which is French-speaking part of the country. Geneva is a global city; an important financial center, a worldwide center for diplomacy center as a result of several international organizations located in the city and the headquarters of numerous agencies of the United Nations and the Red Cross. As such, Geneva is an important center which serves to bring peace to the world.

The city of Geneva ranks high on several indexes which makes it attractive to investors such as the fifth most important financial city in Europe by the Global Financial Centres Index. The city is also ranked highly among the cities with the highest quality of life; it is the city with the third-highest quality of life. The city is referred to as the “Peace Capital” of the world and also the world’s most compact metropolis.

The city is seen as an important center for world peace which makes it attractive to visitors coming into the city. The city also has numerous heritage sites of national significance which are famous tourist attractions.

If you like our list of best places in Geneva, then you should also check out our selection of recommended hotels in Hamburg or the best hotels in Frankfurt. 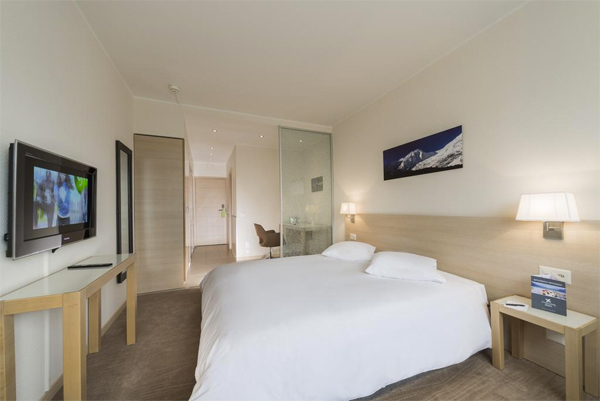 “For something different, this low-cost option operated by Geneva’s hotel-management school offers excellent value. Service levels are exceptional and the spacious rooms, studios and fully-fledged apartments are modern and spotlessly clean.” 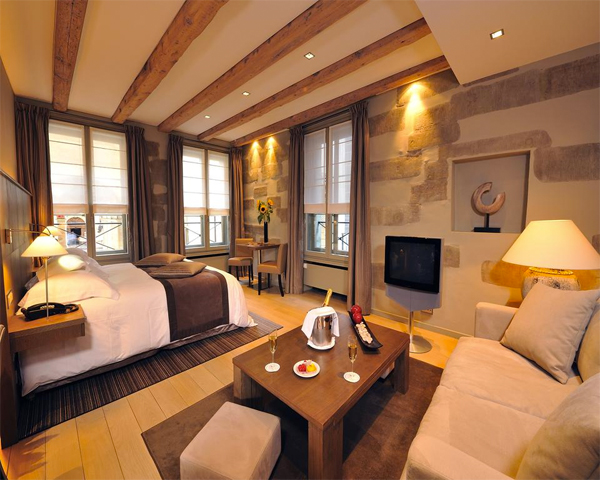 “This intimate, refined 17th-century beauty slumbers against the quiet nocturnal heartbeat of the Old Town. Its 28 rooms and four junior suites are refurbished in a luxe, modern style with downy beds, stone feature walls and exposed wooden beams.” 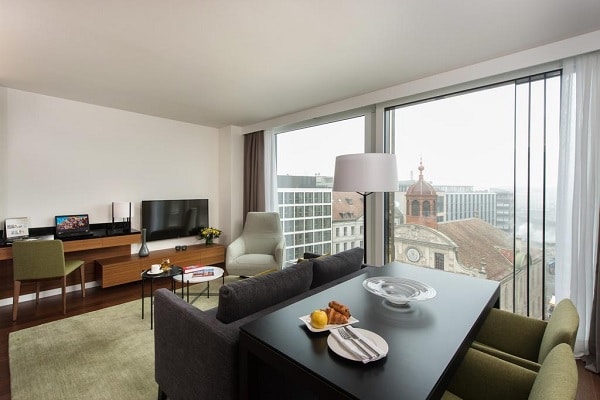 “The Fraser Suites Geneva located downtown in the city center and offers business-style spacious suites, with living rooms that close off from the bedroom and great urban views. There’s no bar or restaurant, but rooms do have kitchenettes.”

“The elegant, but pricey, Mandarin Oriental is located in the charming and quiet Saint Gervais neighborhood on the right bank of the River Rhône. It offers luxurious rooms, impeccable service, and three restaurants, including the top-notch contemporary Indian establishment, Rasoi by Vineet Bhatia.” 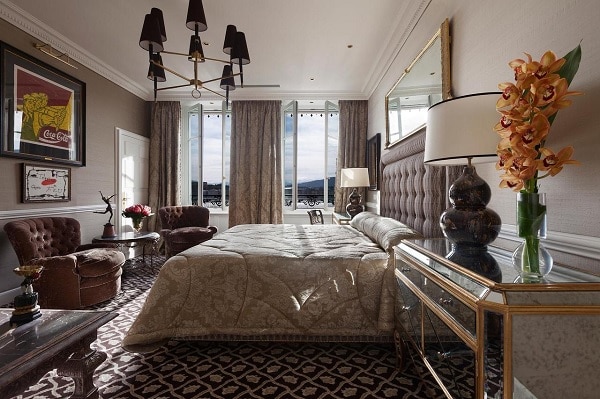 “Impeccable taste, total discretion, and a passion for detail mark this stylish boutique hotel where thematic decorations stretch from African to baroque.”

Featured as Fodor’s Choice in Geneva. 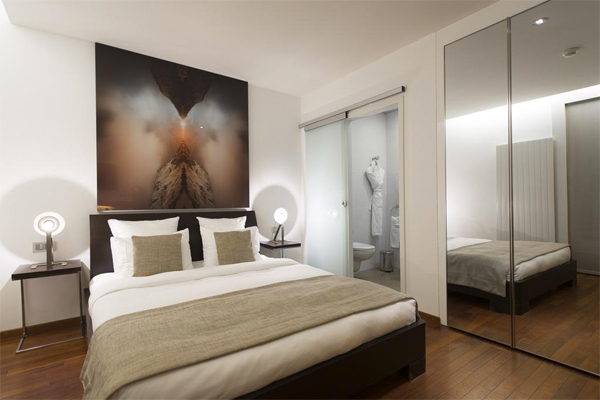 “With a selection of bright, playful guest rooms, suites and long-stay apartments, this funky design hotel on the fringe of the Old Town is popular with repeat visitors to Geneva, and for good reason.” 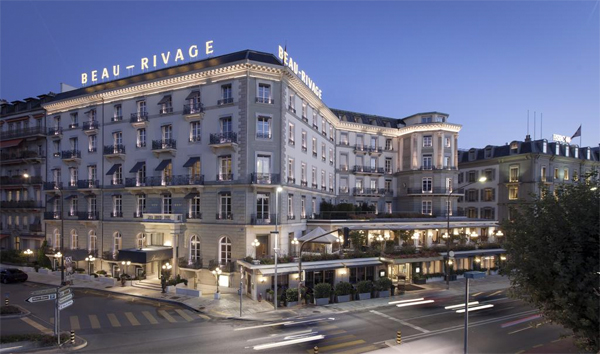 “Boasting an evocative setting where the Rhône meets Lake Geneva and offering exceptional views across the lake to the Swiss Alps, the Beau-Rivage is a 19th-century jewel.” 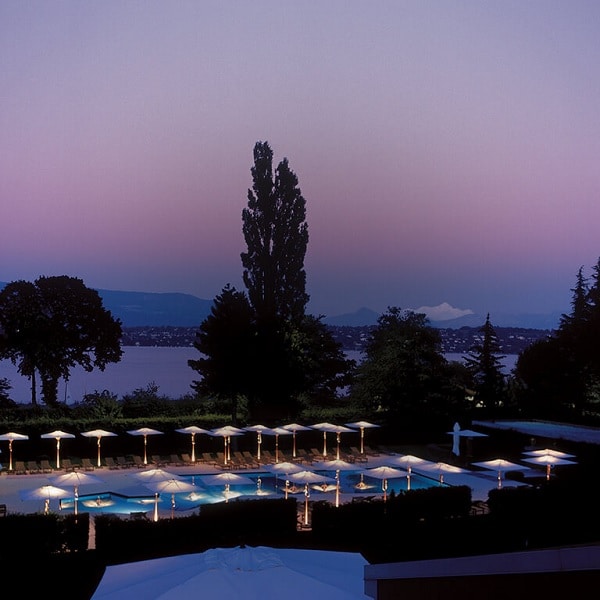 “Nestled on the shores of Lac Léman, this contemporary resort in a residential suburb resembles a grand African lodge. Spacious rooms, most with a balcony or patio, are dressed in warm browns with punches of vibrant reds and purples.”

Carouge
Carouge is a neighborhood in Geneva that was built by Italian architects as a separate town on the outskirts of the city. The area is replete with cafés, hip bars, artisanal shops, boutiques and tailors.

Eaux-vives
Eaux-vives is a neighborhood in the city that is home to a 140 metre high fountain. The area houses thrift shops, boutiques, old style cinemas that give the neighborhood an old world charm and a distinctly bohemian feel.

Les Pâquis
Les Pâquis is a diverse and vibrant neighborhood in the city centre. Although it is small in size, it has a plethora of great restaurants, cafés and bars. The restaurants in the area feature cuisines from all corners of the world.

Old Town
Old Town is a neighborhood that has several landmarks such as Place du Bourg-de-Four, the oldest square in the city, St. Pierre Cathedral, and others. The area has several restaurants, cafés, bars, antique bookshops and art galleries. Shoppers can get various stylish boutiques on Rue de la Croix d’Or and Rue du Rhone shopping streets.

Plainpalais
Plainpalais is a neighborhood that is in the vicinity of several of the buildings of University of Geneva. The area is also home to several of restaurants, cafés and bars.
Which Geneva hotel offers a great spa?
If you're looking to relax in a spa in Geneva, then try La Réserve Hotel & Spa. Customers have given the spa excellent review ratings recently.
How much does it cost to stay in a Geneva hotel?
Geneva is an expensive city. For a 3-star hotel you have to pay around $210 per night and for a 4-star hotel you would be looking at $270 per night. If you're after a luxury 5-star Geneva hotel then you can expect to pay around $610 per night.
Which Geneva hotels are the best for families?
If you're looking to stay in Geneva with your family, then try Hotel d’Angleterre or Hotel Beau-Rivage. Both hotels have excellent review ratings by families.
Which Geneva hotel is the best for a romantic getaway?
If you're looking for a romantic Geneva hotel for couples then try Hotel d’Angleterre. The hotel has excellent customer review ratings by couples.
We use cookies on this website to analyse your use of our products and services, provide content from third parties and assist with our marketing efforts. Learn more about our use of cookies and available controls: cookie policy. Please be aware that your experience may be disrupted until you accept cookies.