We list the best hotels, hostels, B&Bs and guesthouses in Detroit as recommended by the most popular travel experts from CNN, Lonely Planet, Fodor’s, New York Times and more. All hotel recommendations have been referenced with customer reviews. The ratings you see here are aggregated from several platforms and are always higher than 4 out of 5 stars.

Detroit is the most populous city in the state of Michigan and holds the distinction of being the largest city on the United States – Canada border. The metropolitan area known as Metro Detroit is the second largest in the Midwest. The city is a major port on the Detroit River and is one of the most important hubs in the country.

Detroit is best known as the center of US automobile industry with the headquarters of the “Big Three” auto manufacturers located in the city; General Motors, Ford, and Chrysler.

Detroit has a diverse culture which has both local and international implications especially in music with the city giving rise to music genres such as Motown and techno. The city also plays an important role in the development of other genres such as jazz, hip-hop, punk and even rock. This makes it one of the most musically inclined cities in the US.

Detroit is home to a number of architectural monuments, entertainment venues, high-rise buildings, and historic places. The city is becoming increasingly popular among tourist with almost 20 million tourists visiting the city yearly.

Enjoy the best of Detroit form the amazing hotels and resorts on this list. If you like our list of best places to stay in Detroit, then you should also check out our selection of recommended hotels in San Diego or best hotels in Orlando. 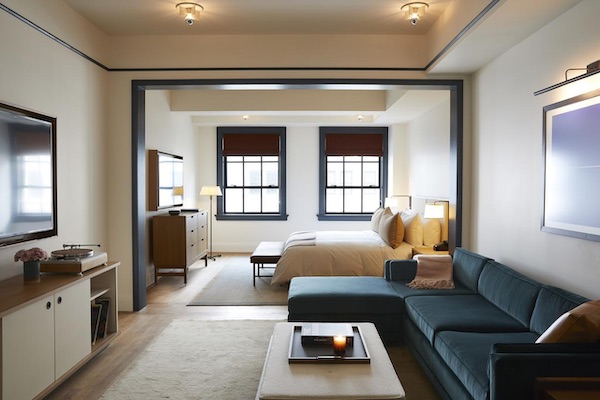 “New independent hotels have played a vital part in Detroit’s regeneration. Though none embraces the city’s past, present and future as holistically as Shinola. It uses contemporary elements to highlight the city’s history.” 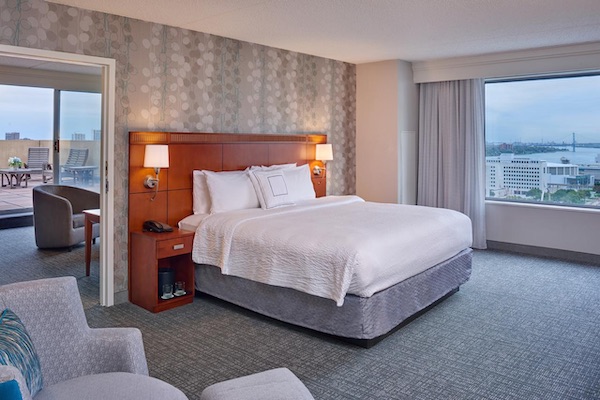 “One of Detroit’s more modern hotels, the Courtyard is connected by skyway to the Renaissance Center; the People Mover links the hotel to the rest of Downtown.” 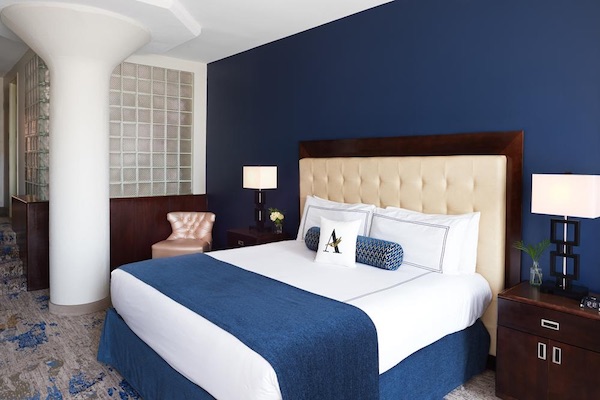 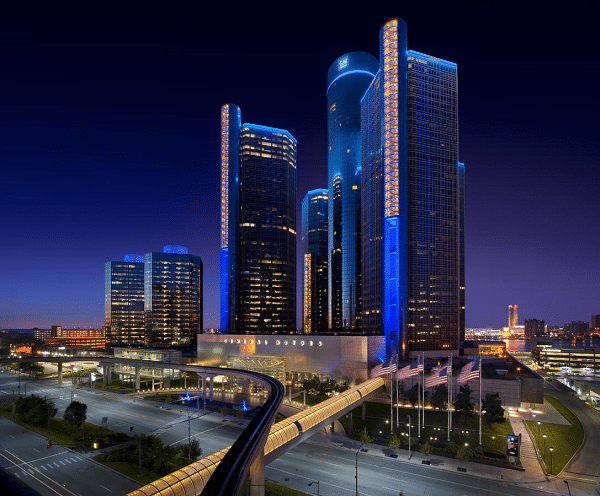 “For views of the Detroit River and the city, the Detroit Marriott at the Renaissance Center is awe-inspiring. The 70-story hotel occupies the central tower of the complex, which serves as the headquarters of the General Motors Company. An inviting five-story Wintergarden overlooks Windsor, Canada.” 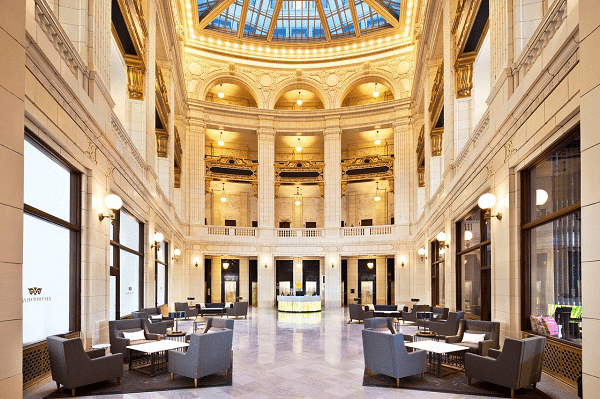 “The Aloft Detroit at the David Whitney, a 136-room hotel located beside the Grand Circus Park, seamlessly combines the past and present. Situated within the ornate David Whitney Building, which opened in 1915, the structure is defined by a stunning lobby rotunda. Several rooms have a view of Comerica Park, home of the Detroit Tigers.” 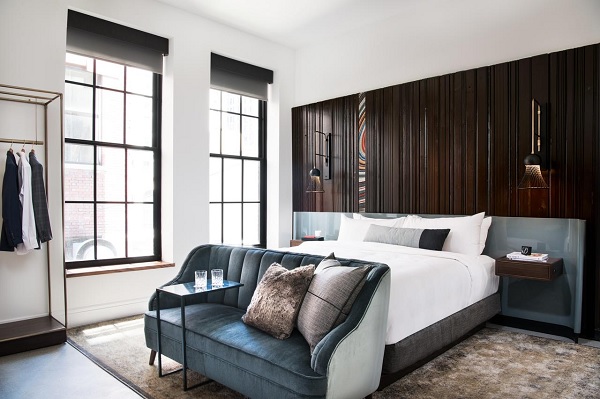 “In 2017, this 1929 fire station in the heart of the city was transformed into a boutique hotel that blends modern convenience and style with original architectural features and a strong sense of history. Rooms are spacious and comfortable.” 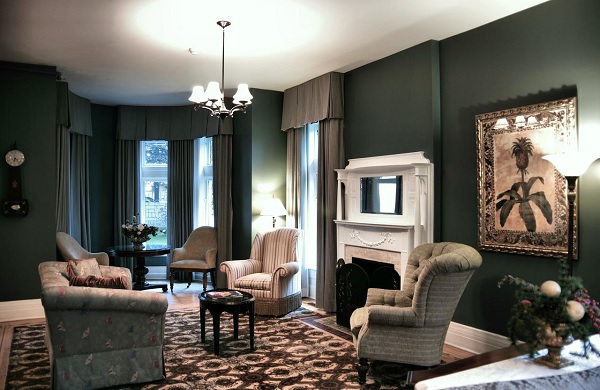 The Inn on Ferry Street, Detroit

“Forty guest rooms fill a row of Victorian mansions right by the art museum. The lower-cost rooms at The Inn on Ferry Street are small but have deliciously soft bedding; the larger rooms feature plenty of antique wood furnishings.”

What are the best neighborhoods to stay in Detroit?
Detroit is a city in the Midwestern U.S. state of Michigan with an area of 370 sq. km. and a population of 673,000 people, making the largest city in the state. It is home to some largest auto makers in the world that gives it the nickname “Motor City”. Some of the best neighborhoods of Detroit are:

Corktown
Corktown is the oldest neighborhood of Detroit and is renowned for its great places to dine and relax such as Astro Coffee and Slows Bar BQ. The neighborhood derived its name after several Irish immigrants came to the place in the mid of the 19th century.

Downtown
Downtown is a neighborhood that has many things to provide starting from nightlife, culture, sports, retail music, art, architecture, and history.

Eastern Market
Eastern Market is a diverse and lively neighborhood that is the home to one of the largest and oldest markets in the US. The area has a plethora of restaurants, bars, and dining options as well as it has a robust artistic reputation. The area is well connected with Hamtramck to the north and Dequindre Cut greenway to the south.

New Center
New Center is a neighborhood that is replete with dining, retail and entertainment options. Before 1990s, it was home to General Motors and now it houses Henry Ford Medical Center, Cadillac Place and Fisher Building.

Mexicantown
Mexicantown is a neighborhood that is home to the city’s biggest Mexican community. The area is replete with authentic Mexican restaurants such as Los Altos and Taqueria El Rey and bakieries such as La Gloria and MexicanTown Bakery.
Which Detroit hotels serves great breakfast?
Try The Inn on Ferry Street if you're looking for a delicious breakfast. The Detroit hotel has excellent customer review ratings for breakfast.
How much does it cost to stay in a Detroit hotel?
For a 3-star hotel you have to pay around $200 per night and for a 4-star hotel you would be looking at $230 per night. If you're after a luxury 5-star Detroit hotel then you can expect to pay around $300 per night.
Which Detroit hotel offers great views?
If you're looking for a room with a view, then try Marriott Hotel at the Renaissance Center, it offers some amazing views of Detroit.
Which Detroit hotel is the best for a romantic getaway?
If you're looking for a romantic Detroit hotel for couples then try Foundation Hotel. The hotel has excellent customer review ratings by couples.
What is the best hotel near the MGM Grand Casino in Detroit?
If you're planning a night out in the casino and want to stay in that area, then try Foundation Hotel, it has one of the best customer review ratings for that area.
We use cookies on this website to analyse your use of our products and services, provide content from third parties and assist with our marketing efforts. Learn more about our use of cookies and available controls: cookie policy. Please be aware that your experience may be disrupted until you accept cookies.