We list the best hotels, hostels, B&Bs and guesthouses in Denver as recommended by the most popular travel experts from CNN, Lonely Planet, Fodor’s, New York Times and more. All hotel recommendations have been referenced with customer reviews. The ratings you see are an aggregate from several platforms and is always higher than 4 out of 5 stars. The ratings here are expertly reviewed and carefully chosen.

Officially known as the City and County of Denver, this the capital and the most populous municipality of the state of Colorado. The city is dubbed the Mile High City due to its official elevation being at exactly one mile above sea level. Ranked a beta-world city, the city is one of the fastest-growing cities in the country. Denver was named the best place to live in the United States by the US News & World Report in the year 2016 showing the high livability ratings of the country.

The city is home to some of the most popular event venues in the country; the Apollo Hall is historically famous for being the stage of many plays for early settlers while the Municipal Auditorium (now known as the Ellie Caulkins Opera House) was the venue for the 1908 Democratic National Convention.

Denver is home to several nationally recognized museums and art galleries such as the Denver Art Museum which is the second-largest Performing Arts Center in the US.

Denver is known for being one of the best cities for singles due to its bustling and lively restaurants, bars and clubs.

If you like our list of best places to stay in Denver, then you should also check out our selection of recommended hotels in Miami or best hotels in Las Vegas. 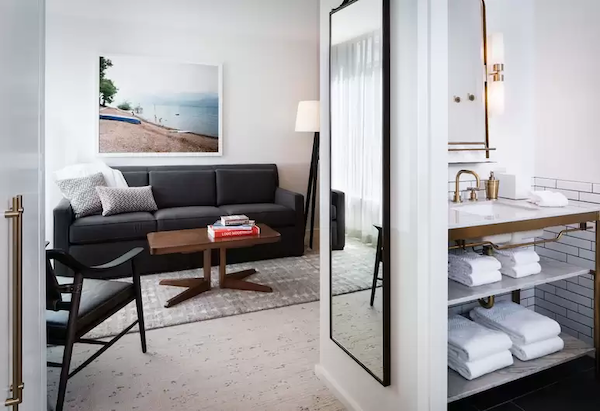 “An urban resort in the upscale Cherry Creek district, the 154-room Halcyon Hotel features a rooftop pool and bar, the subterranean cocktail lounge B&GC and a “gear garage” with loaner outdoor equipment.”
Featured in New York Times’ 36 Hours in Denver. 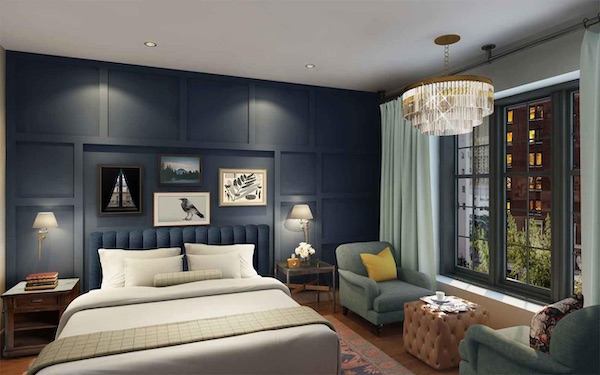 “The new Ramble Hotel in RiNo looks like a warehouse rehab with a handsome red brick exterior and double-height lobby. The new building houses Death & Co Denver cocktail lounge in the lobby, filled with tufted sofas and chandeliers.”
Featured in New York Times’ 36 Hours in Denver. 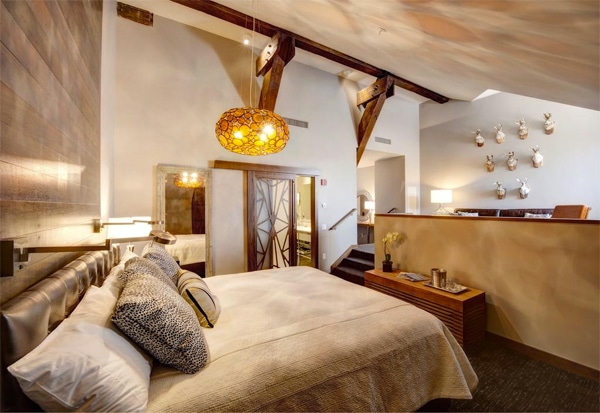 “Opened in 2014 above the main terminal of Denver’s renovated Union Station, the Crawford Hotel is designed to evoke Pullman-era train travel while offering decidedly modern perks like a Tesla courtesy car and complimentary gym access. Each of the 112 soundproofed rooms are unique and some are smaller than others.” 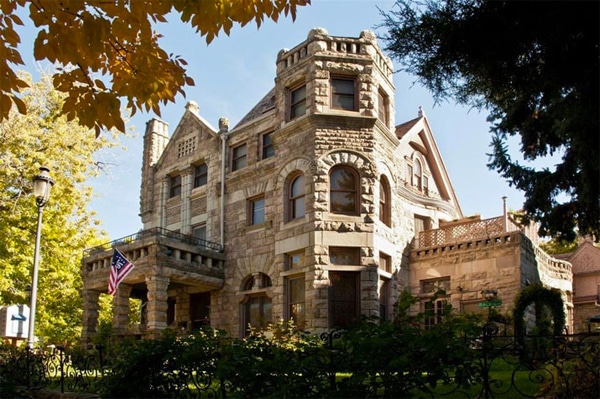 “In the Capital Hill neighborhood, the Castle Marne Bed & Breakfast is a nine-room inn in a 1889 Richardsonian Romanesque lava stone mansion, designed by William Lang.” 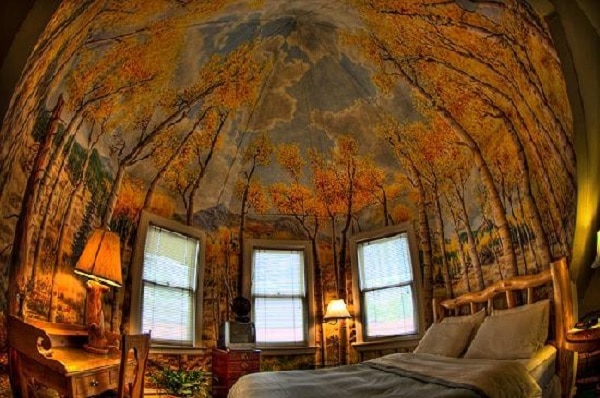 “The bedrooms at this eco-minded guesthouse in the city’s Five Points neighbourhood are popping with personality. The four suites incorporate designs by local artists, and the nine smaller rooms may have mural artwork, log-cabin stylings, a private deck or a hot tub.” 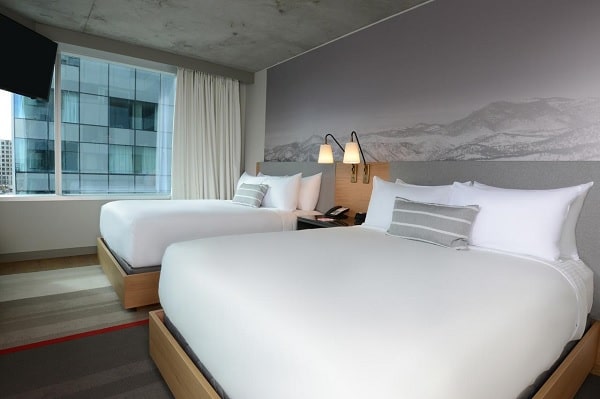 “Hotel Indigo opened in January 2017 and mixes industrial chic and Scandi minimalism with the friendly vibe Denver is famous for. The hotel’s restaurant, Hearth and Dram, is a destination in its own right.” 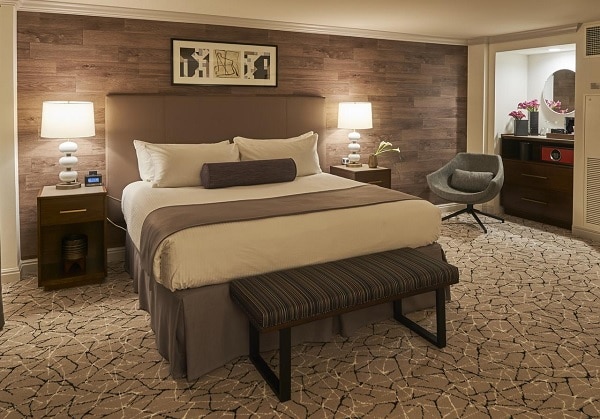 “Part of an eight-strong group, the Warwick adds a dash of charm to the usual chain experience with floor-to-ceiling windows in its classic and contemporary bedrooms.” 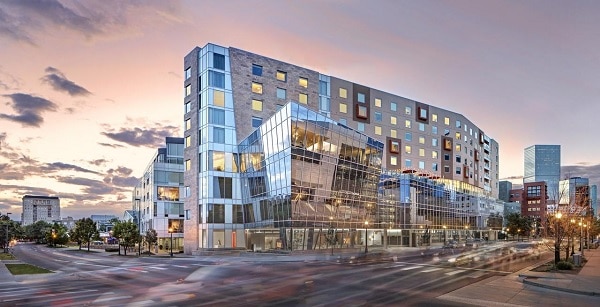 “The Art, in downtown Denver, is a capital-A Art hotel with a museum pedigree. The hotel’s in-house curator, Dianne Vanderlip, is the former curator of modern and contemporary art at the Denver Art Museum, which is just steps away from the 165-room hotel.” 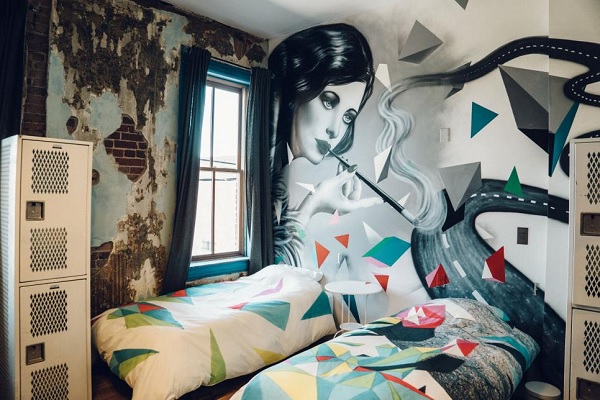 “This swanked-out hostel is an oasis for budget travelers. Stylish, modern and squeaky clean, dorms have themes – Aspen, Graffiti, Vintage Biker – and sleep five to 10 people in bunks. Mattresses are thick and duvets plush.” 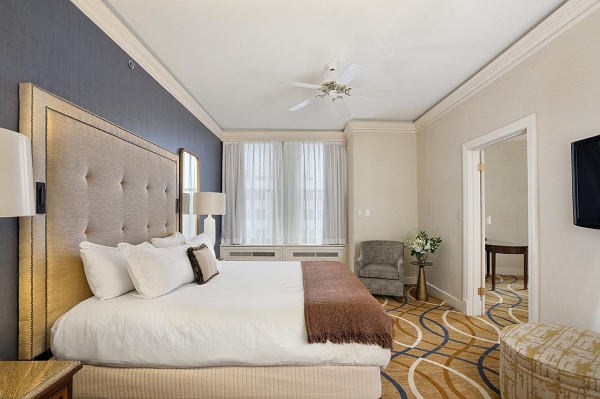 “The crown jewel of Denver hotels since 1892, The Brown Palace Hotel and Spa remains one of the most luxurious (and most expensive) properties in town. Beyond us commoners, almost every U.S. President has stayed at The Brown Palace since Teddy Roosevelt first stayed in 1905.”

Featured as Fodor’s Choice in Denver.

What are the best neighborhoods to stay in Denver?
Denver the capital city of Western U.S. state of Colorado and is known as ‘Mile High City’ as it is perched a mile above the sea level. The city has an assorted range of landscape from snow-covered Rocky Mountains, river canyons and arid desert. Some of the best neighborhoods of Denver are:

Capitol Hill
Capitol Hill is a neighborhood lying east to the Colorado State Capitol building that has many specialty shops and parks to walk around. It also has a diverse range of bars, coffeehouses, bistros, and restaurants. The area is the home to a vegetarian restaurant City O’ City that has been earning rave reviews for years.

Five Points
Five Points is the most diverse and oldest neighborhood that is also named as the “Harlem of the West”. The area is famous for its restaurants, cafes, and hotels. It has popular landmarks such as Rossonian Hotel, the Black American West Museum, and every year in May the area hosts Five Points Jazz Festival.

LoDo
LoDo, short for Lower Downtown, is a great neighborhood that has many shops, restaurants, and bars. The area is also the home to The Viewhouse that offers striking rooftop views of the skyline of the city as well as Vesta Dipping Grill that offers gourmet food.

RiNo
RiNo, short for the River North Arts District, has historic factory buildings and warehouses. The neighborhood is also home to some of the finest breweries, restaurants, music venues, studios and art galleries. The neighborhood also hosts First Fridays events on the first Friday of each month.

Uptown
Uptown is among the oldest neighborhoods of the city that is home to a wide array of boutiques, bars, coffee shops and restaurants.
Which Denver hotel has the best swimming pool?
If you're looking for a Denver hotel with a great swimming pool then try Hotel Warwick, it has an excellent rooftop swimming pool which has received excellent customer reviews.
Which Denver hotels serve great breakfast?
Try Queen Anne Bed & Breakfast or the Castle Marne Bed & Breakfast if you're looking for a delicious breakfast. Both places have excellent customer review ratings for their breakfast.
How much does it cost to stay in a Denver hotel?
For a 3-star hotel you have to pay around $155 per night and for a 4-star hotel you would be looking at $230 per night. If you're after a luxury 5-star Denver hotel then you can expect to pay around $540 per night.
We use cookies on this website to analyse your use of our products and services, provide content from third parties and assist with our marketing efforts. Learn more about our use of cookies and available controls: cookie policy. Please be aware that your experience may be disrupted until you accept cookies.