We list the best hotels, hostels, B&Bs and guesthouses in Boston as recommended by the most popular travel experts from CNN, Lonely Planet, Fodor’s, New York Times and more. All hotel recommendations have been referenced with customer reviews. The rating you see is an aggregate from several platforms and is always higher than 4 out of 5 stars. Our ratings are tested and trusted, helping you make the best travel plans.

Boston is the capital city of the Commonwealth of Massachusetts and also doubles as the most populous municipality in the state. As the anchor of a larger metropolitan known as Greater Boston, Boston is definitely a major city in the United States. The city is one of the oldest cities in the country, and it was the scene of several key events of the American Revolution in the annals of the United States. Major events such as the Boston Massacre, Boston Tea Party and the Siege of Boston are standout events of the American Revolution contributing to the rich history of the city.

The city is an international center of higher education which includes law, medicine, business, and engineering. With a startup of nearly 2000, the city of Boston is regarded as a world leader in innovation and entrepreneurship. The city of Boston boats of some of the most remarkable achievements such as being rated as the city with the highest average rate of philanthropy amongst households in the United States.

If you like our list of design hotels in Boston, then you should also check out our selection of recommended hotels in New York or best hotels in Washington. 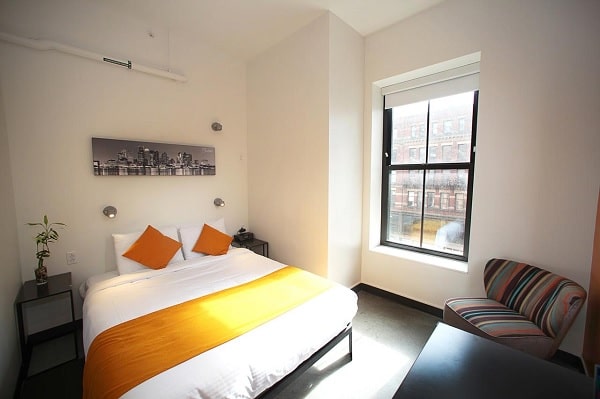 “HI-Boston sets the standard for urban hostels, with its modern, ecofriendly facility in the historic Dill Building. Purpose-built rooms are comfortable and clean, as are the shared bathrooms.” 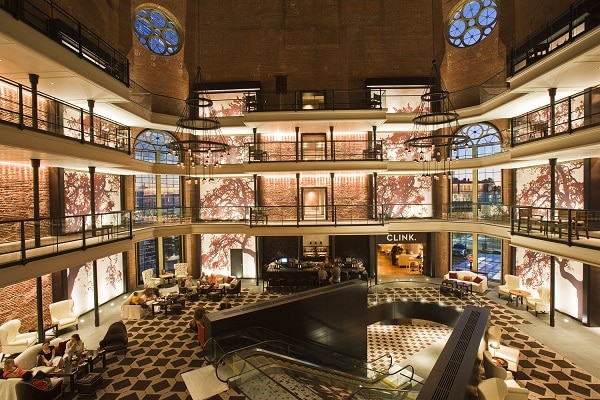 “For a posh jailbreak, try the Liberty Hotel; once the Charles Street Jail, the 298-room hotel features five bars and dining spots and a captivating, multitiered lobby.” 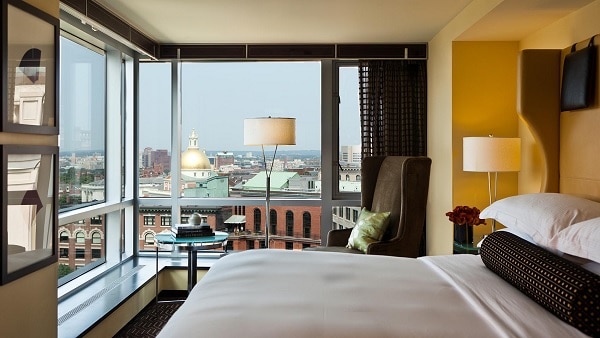 “Right off Boston Common, with views of downtown and the Charles River, is the elegant high-rise boutique Nine Zero Hotel, with 190 rooms.” 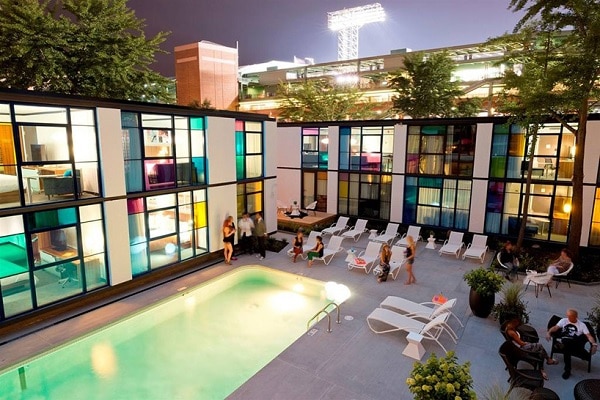 “Boston’s most talked-about, trendy accommodations is the Verb Hotel, a renovated Howard Johnson’s in the shadow of Fenway Park, whose rooms and public spaces are decorated with manual typewriters and relics from Boston’s rock ‘n’ roll history. Some rooms have patios overlooking the courtyard pool.” 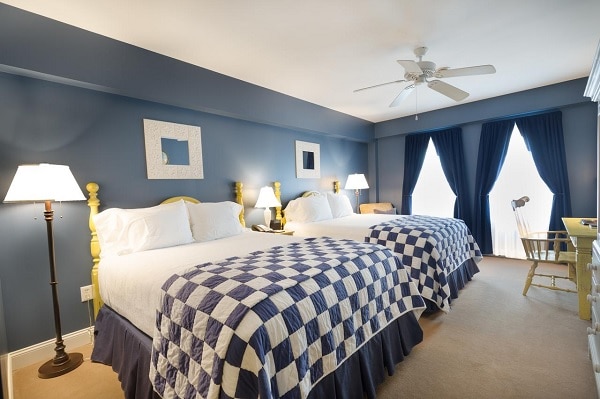 “Once the Engine 7 Firehouse, this city landmark is now a cool and classy all-American hotel. The 65 guest rooms exhibit a firefighter riff, alongside the requisite creature comforts.” 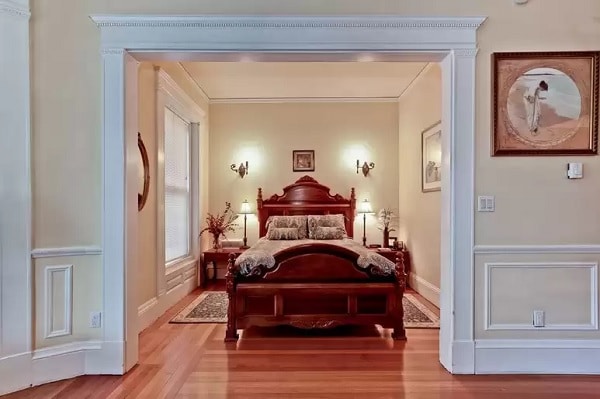 “If luxe bed and breakfasts are your thing, the Gryphon House will certainly please. Located in a four-story 19th-century brownstone in the Kenmore Square area, the staff of this value-packed gem is helpful and friendly.”

Featured as Fodor’s Choice in Boston. 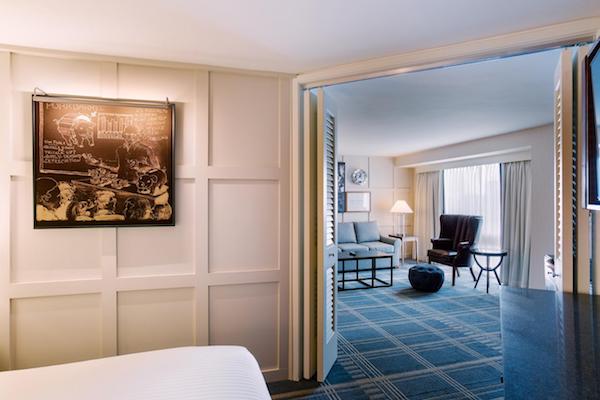 “The Charles is among the best hotels in the Boston area, and certainly the best in Cambridge—with rates to match. Unlike a lot of high-end hotels, it’s maintained a consistent guest room style: simple yet luxurious, with custom Shaker-style furnishings and abundant amenities.” 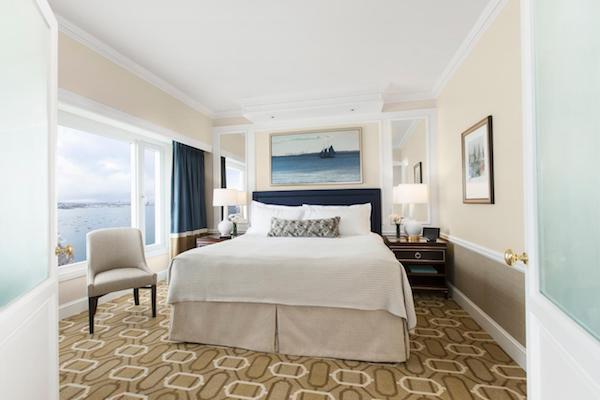 “One of the best hotels in Boston faces the harbor and the Rose Kennedy Greenway, but the fantastic location is just one reason to stay here: Others include the superb service, a great pool and spa, excellent restaurants, and plush, luxurious rooms.”

Back Bay
Back Bay is a neighborhood full with stylish restaurants, boutiques, shops, and vintage brownstone houses on Commonwealth Avenue. The neighborhood has several shopping complexes in its vicinity Boylston Street, Prudential Center, and Newbury Street.

Charlestown
Charlestown is a neighborhood on the northern part of the city, located on the shores of the Boston Harbor and the Mystic River. The neighborhood is replete with landmarks like the Charlestown Navy Yard, the Bunker Hill Monument, and the USS Constitution.

Fenway-Kenmore
The Fenway-Kenmore is among the liveliest neighborhood in the city with a wide range of restaurants, clubs, and sports bars on or near Landsdowne Street. The neighborhood also extends to the cultural, attractive Museum of Fine Arts and Boston Symphony Hall.

South Boston
South Boston is a rapidly expanding neighborhood in the Fort Port and Seaport areas and it is mainly residential and is popular for its closeness to the downtown area and facilities. The neighborhood has several beaches and has a wide array of restaurants, markets, bars and a robust community.
What are the best hotels near Fenway Park?
Looking to stay close to Fenway Park, home of the famous Boston Red Sox? Try The Verb Hotel or The Gryphon House Bed & Breakfast, both are excellent and affordable options.
Which Boston hotel offers great views?
If you're looking for a hotel in Boston with great views, then try Harber Hotel, it offers some fabulous views of the harbor.
Which Boston hotel serves great breakfast?
If you want to have an excellent breakfast to start your day then try The Kendall Hotel, guests have rated their breakfast as excellent over recent years.
Which Boston hotel is the best for families?
The Harber Hotel is one of the best options for families looking to stay in Boston.
How much does it cost to stay in a Boston hotel?
Boston isn't cheap. A 3-star hotel costs around $220 per night on average, while a 4-star hotel will cost you approximately $330 per night. A luxury 5-star hotel in Boston will cost you around $485 per night.
We use cookies on this website to analyse your use of our products and services, provide content from third parties and assist with our marketing efforts. Learn more about our use of cookies and available controls: cookie policy. Please be aware that your experience may be disrupted until you accept cookies.