RecommendedRoom lists the best hotels, hostels, B&Bs and guesthouses in Berlin as recommended by travel experts from CNN, Lonely Planet, Fodor’s, New York Times and more. All hotel recommendations have been referenced with customer reviews. The ratings you see are an aggregate from several platforms and is always higher than 4 out of 5 stars.

Berlin is by evidence the largest city in Germany while it also serves as the capital of the country. Berlin is influenced by a temperate seasonal climate which is a result of the location of the city on the European Plain. About a third of the city of Berlin is composed of forest parks, gardens, rivers, and lakes making it a natural scenic beauty. As a result, this makes the city a center of tourist attractions.

Berlin is a world city full of culture, media, politics, and science as well as rich history where it has served as the administrative capitals of several European kingdoms during its history.

The metropolis of Berlin is a major tourist destination as a result of a number of things such as its high-tech firms, a continental hub for air traffic and rail traffic and world-renowned museums and entertainment venues. The city has also been the host to numerous sporting events over the years.

The city is even more popular as a tourist attraction for its festivals, diverse architecture and design, nightlife and contemporary arts. Berlin has also recently and increasingly become a popular location for international film productions due to the world’s oldest large-scale movie studio complex.
If you like our list of design hotels in Berlin, then you should also check out our selection of recommended hotels in Amsterdam or best hotels in Hamburg. 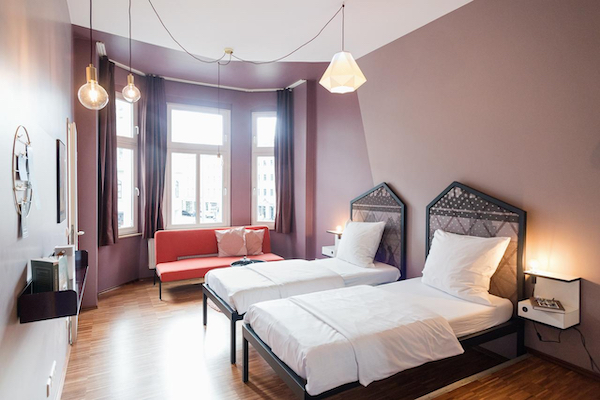 “This excellent budget hostel, located right on Mitte’s buzzing Rosenthaler Platz, offers a mix of dorms and private rooms, available with or without private bathrooms. In addition, there’s a cute café, a basement bar with its own brewery, plus the world’s only Hoff museum.” 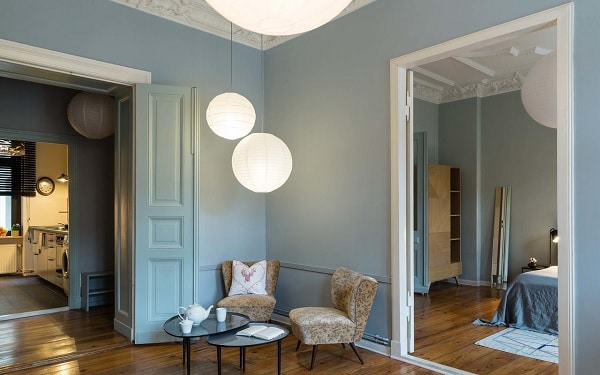 “These 11 stylish and modern units have full kitchens and neat historic touches such as exposed red-brick walls and parquet floors. Four have balconies, one a little garden.” 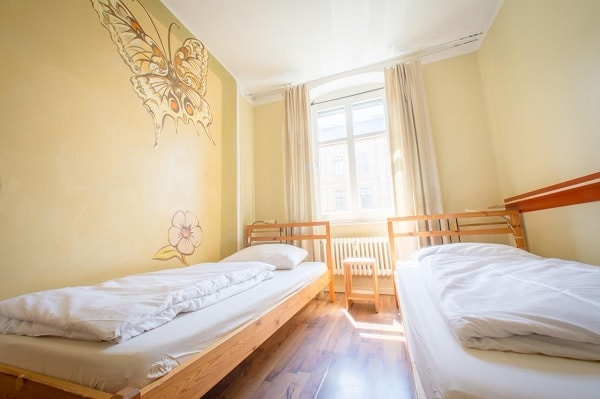 “An excellent choice for solo travellers, this small indie hostel has personable staff that go out of their way to make all feel welcome. Make new friends while chilling in the lounge or garden, firing up the BBQ or hanging out in the 24-hour kitchen.” 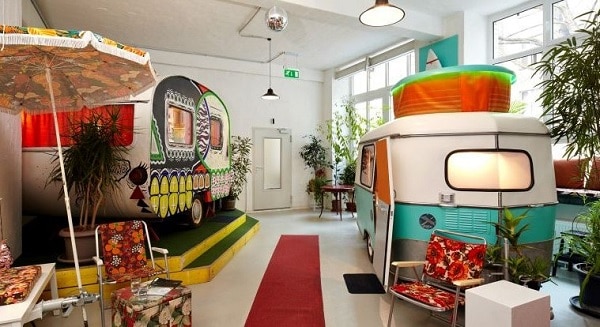 “The name Hüttenpalast – which translates loosely as ‘hut palace’ –gives some idea of what to expect from Berlin’s most idiosyncratic accommodation option. It’s a former vacuum cleaner factory in the hip Neukölln district and offers ‘rooms’ in a range of converted vintage caravans and repurposed huts in an indoor setting among fake grass and fairy-lit silver birches.”

Featured in The Guardian’s 20 great hotels to stay in Germany. 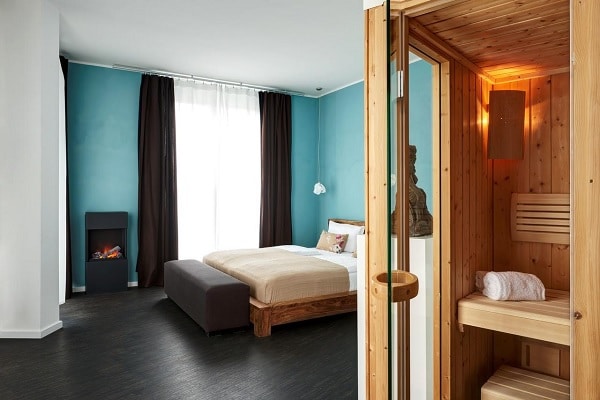 “Almodóvar Hotel, a 60-room eco boutique property that opened in 2012 in the Friedrichshain district, combines smart, pared-down design with a focus on environmental sustainability that stretches from the textiles to the lighting to the organic, vegetarian breakfast spread.”

“The newest addition to the Turkish luxury hotel chain, Titanic Deluxe Berlin opened this March in a newly renovated landmarked 19th-century building that once housed the costumes of the Berlin State Opera. Amenities include a 1,000-square-meter spa with a hamam and a restaurant run by popular local Turkish restaurant Hasir.” “The Hotel am Steinplatz in Berlin opened as a luxury hotel in 1913, in an elegant building designed by the German Art Nouveau-inspired architect August Endell. A super luxurious and comfortable experience that has both Old World aristocratic touches as well as a stylish modern feel.” 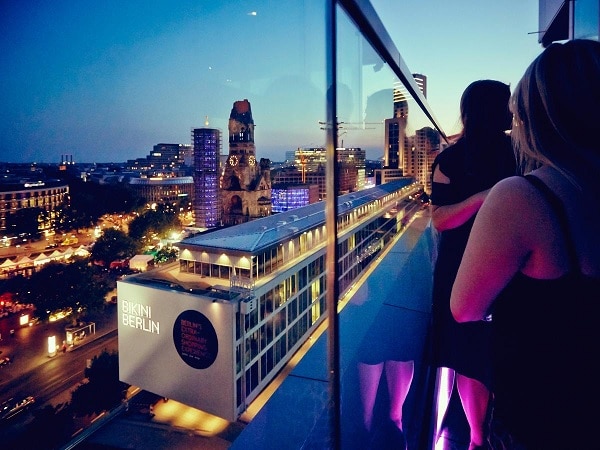 “A fashionable, comfortable and modern experience with sweeping views of old Berlin.If the name Bikini Berlin doesn’t give you a sense of this boutique hotel’s playful vibe, you’ll get it from the bicycles dangling from the ceiling at the entrance and the receptionists’ casually hip disheveled sweatshirts.” 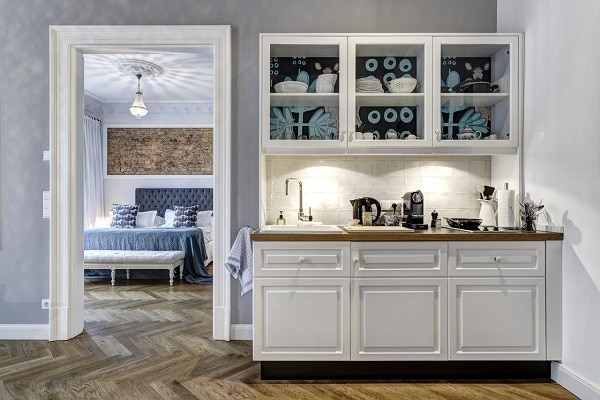 “Built inside a 19th-century residential building, this aparthotel is worth booking for the location alone. It’s flanked by cool bars, indie boutiques and great restaurants in the heart of buzzy Mitte.” 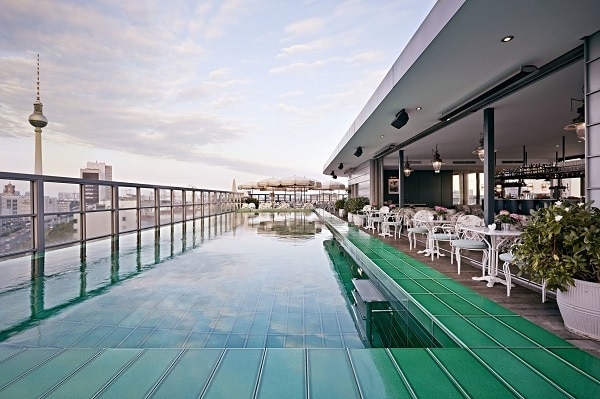 “In 2010, the Soho House Berlin, a 40-room hotel and private club aimed at the city’s upwardly mobile “creative” class, became the newest tenant on Torstrasse, a street in central Berlin once peppered with squats and illegal art spaces.” 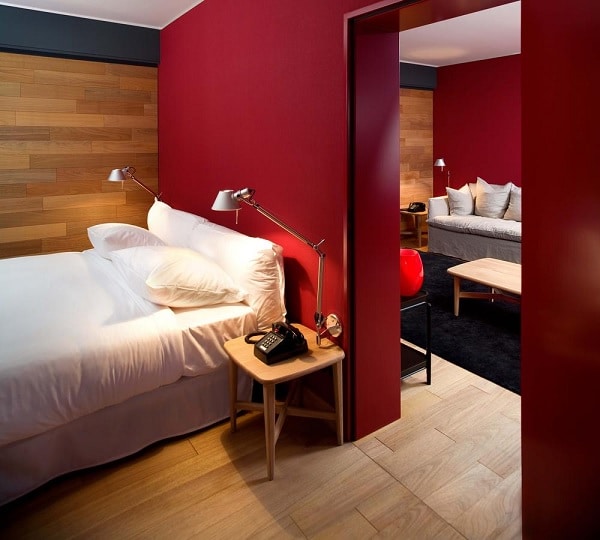 “Casa Camper is located in the heart of Berlin’s Mitte shopping and sightseeing district, a short walk from Museum Island and the Mulackstrasse boutiques. The hotel is stylish but understated, offering stunning views over the rooftops of central Berlin and the steeples of Prenzlauer Berg.” 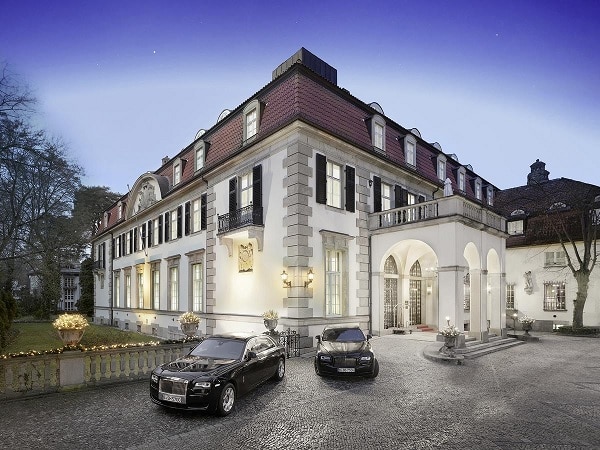 “For those looking to enjoy Berlin from a less urban home base, the Schlosshotel im Grunewald, in the upscale and leafy Charlottenburg neighborhood, offers bucolic surroundings and luxury.” 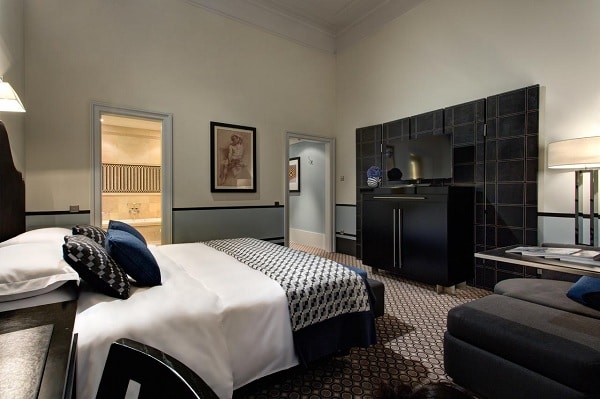 “Just off Berlin’s grand royal boulevard of Unter den Linden, the imposing Hotel de Rome is popular with visiting diplomats and politicians. It has an unexpected back story: as the central bank of the German Democratic Republic, it likely played host to even more backroom deals than it does today.” 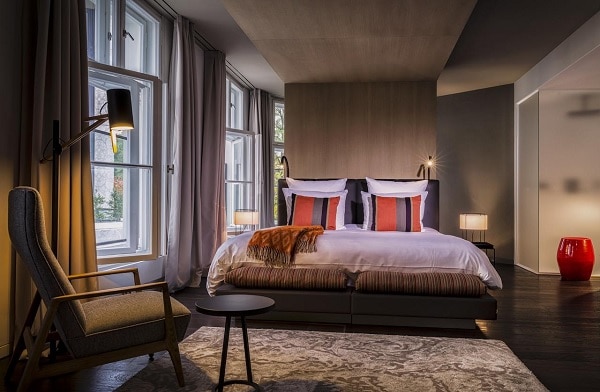 “This charismatic refuge in a 1930s Danish diplomatic outpost flaunts understated grandeur and has the Tiergarten park as a front yard. A crocodile sculpture flanked by sweeping staircases fluidly leads the way to a hip bar, a Michelin-starred restaurant and sleekly furnished and spacious rooms.” Alt-Treptow
Alt-Treptow is a neighborhood with full of natural beauty and is situated close to Treptower and Plänterwald Park with its mesmerizing walking paths and beautiful dam. Its proximity to the River Spree makes it a peaceful and serene location.

Bergmannkiez
Bergmannkiez is a quaint neighborhood that has a historic market square, café-lined streets and cobblestone roads. The main street of Bergmannstrasse is renowned for its awesome selection of things to see and do such as the historic market hall that sells everything from books to fresh produce.

Gräfekiez
Gräfekiez is a beautiful neighborhood that is highlighted by plenty of quaint shops, plenty of restaurants, tree-lined avenues, cafes, and many more public places for locals and visitors to visit and chill out. The neighborhood also has speciality cuisine restaurants such as an Israeli restaurant and a winery that serves high quality wine.

Prenzlauer Berg
Prenzlauer Berg is a neighborhood that has plenty of cafés, ice cream shops and playgrounds. The neighborhood underwent a radical transformation from being the crash pad and workshops of bohemian artists to emerge as one of the most expensive, sophisticated and stylish areas in the city.

Wrangelkiez
Wrangelkiez is among the most beautiful neighborhoods in Berlin that is home to attractive bars, shops and cafes with an ever pleasant atmosphere.
Which Berlin hotel offers great views?
The 25Hours Hotel Bikini offers some great views of Berlin, it also has an excellent rooftop bar.
Which Berlin hotel offers excellent breakfast?
If you're looking for a hotel in Berlin that offer a good breakfast, then try the Titanic Deluxe Hotel Gendarmenmarkt. Breakfast there has been rated as excellent by guests.
Which Berlin hotel has the best rooftop bar?
Looking for a great rooftop bar with some nice views of Berlin? Try the 25Hours Hotel Bikini, it's affordable and offers nice views and a great rooftop bar.
How much does it cost to stay in a Berlin hotel?
The price for a 3-star hotel in Berlin is $110 per night on average. If you're looking for a 4-star hotel then the cost will be approximately $140 per night. If luxury is your thing and you want a 5-star hotel then you would have to pay around $230 per night.
We use cookies on this website to analyse your use of our products and services, provide content from third parties and assist with our marketing efforts. Learn more about our use of cookies and available controls: cookie policy. Please be aware that your experience may be disrupted until you accept cookies.