We list the best hotels, hostels, B&Bs and guesthouses in Barcelona as recommended by the most popular travel experts from CNN, Lonely Planet, Fodor’s, New York Times and more. All hotel recommendations have been referenced with customer reviews. The ratings you see is an aggregate from several platforms and is always higher than 4 out of 5 stars. Our ratings are to be trusted as they include both customer reviews and expert opinions.

Barcelona is a city in Spain located in the Catalan region of the country. It is the capital of Catalonia and also doubles as the largest city in the region. Barcelona is the largest metropolis on the Mediterranean Sea while it is the sixth most populous urban area in the European Union.

Barcelona was founded as a Roman city before it became the capital of the County of Barcelona during the Middle Ages. The city has a rich history and cultural heritage making it an important cultural center in Spain. This further makes the city a major tourist destination.

Some of the most visited places in the city are the architectural works of Antoni Gaudi and Luis Domenech i Montaner which have both been designated UNESCO World Heritage Sites. Barcelona was the host of the 1992 Summer Olympics as well as the host of several world-class conferences.

As a world’s major global city, Barcelona is a leading tourist, economic, trade fair and cultural centers with a huge influence in the commerce, education and entertainment of Europe and particularly the Mediterranean region.

If you like our list of design hotels in Barcelona, then you should also check out our selection of recommended hotels in Madrid or best hotels in Lisbon. 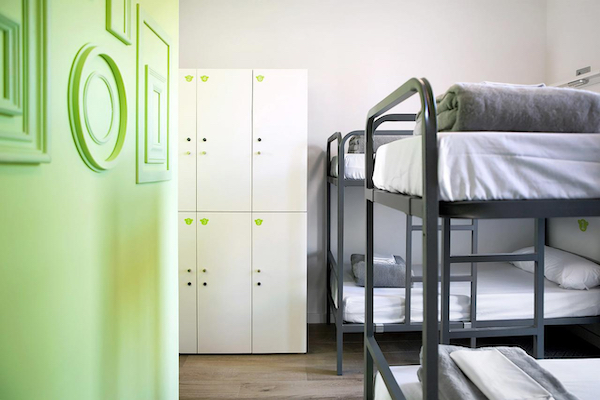 “Modern, clean and situated right next to the main train terminal of Sants Estacio, this grown-up hostel offers both comfort and convenience. Friendly staff and a beautiful interior sun terrace seal the deal.” 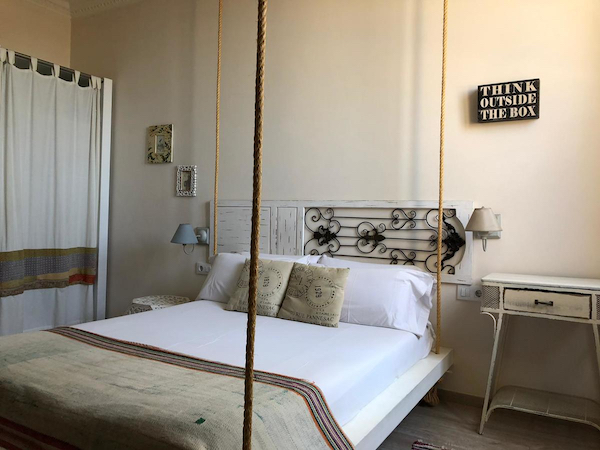 “A small and stylish boutique hostel housed in one of Barcelona’s emblematic modernist buildings. Located on one of the trendiest streets in Barcelona’s ritzy Eixample neighbourhood, Casa Kessler is well situated for exploring the best of the city’s gastronomic and cultural gems on foot.” 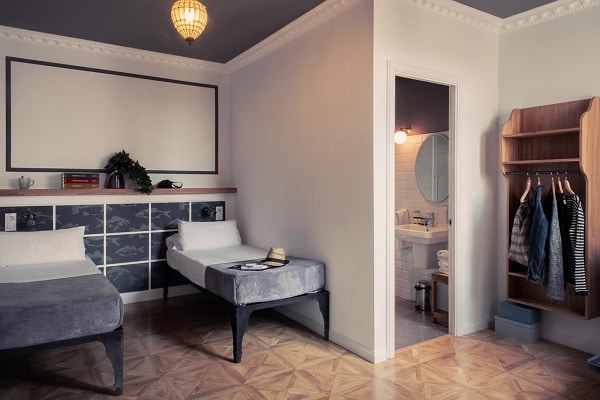 “A hostel with a difference, the hip Casa Gràcia has raised the bar for budget accommodation. Enticing common spaces include a terrace, library nook and artistically decorated lounge as well as a fully equipped self-catering kitchen – not to mention a restaurant and DJ-fuelled bar.” 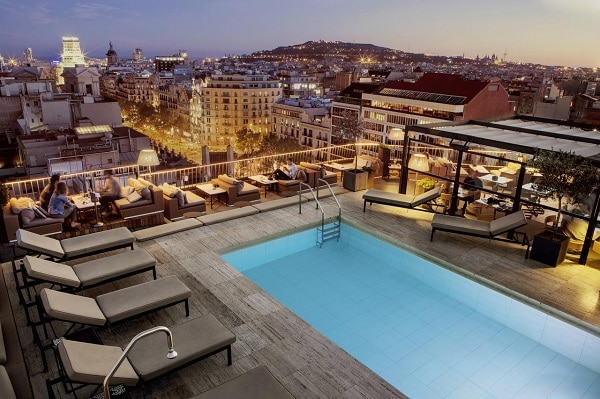 “About 100 years old, the Majestic peers with a certain gravitas down Paseo de Gracia, Barcelona’s major shopping avenue. From the rooftop terrace bar you can see how the city grew outward from its neatly gridded center.” 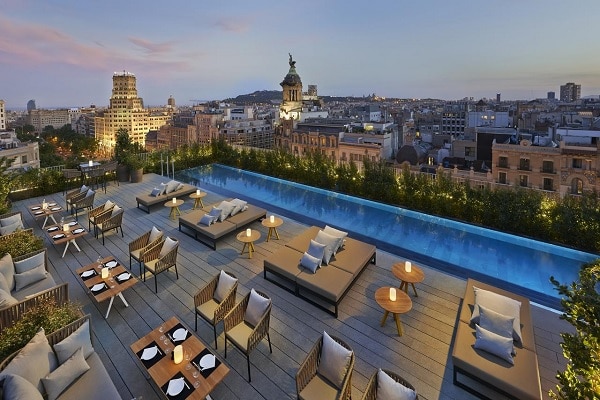 “Since opening in late 2009, the Mandarin Oriental, with 98 elegant rooms and suites, has been the choicest hotel on the grand Passeig de Gràcia. Faultless service and unadulterated luxury do come at a price.” 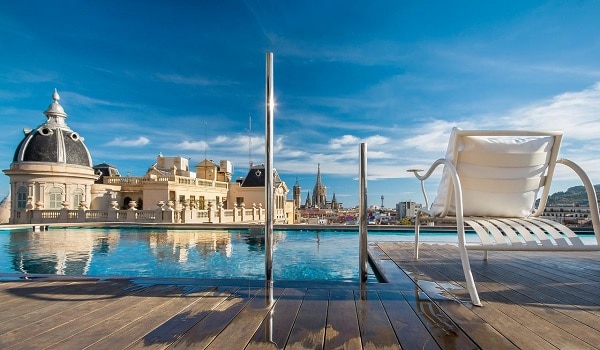 “The Ohla Hotel, opened in 2011, has 74 rooms and suites with modern design. The location, two blocks from Plaça Catalunya, is ideal even if you don’t have a reservation at the in-house, Michelin-starred restaurant Saüc.” 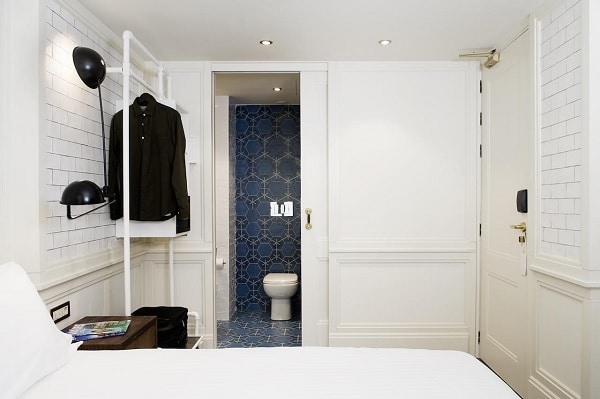 “The Hotel Praktik Bakery offers affordable lodging, with style and, sometimes, a gimmick or two. It’s not for those short of dietary willpower. But if you’re looking for a cheerful, inexpensive room and a lavish, delicious, carbo-loaded start or end to your day, this is the place.” 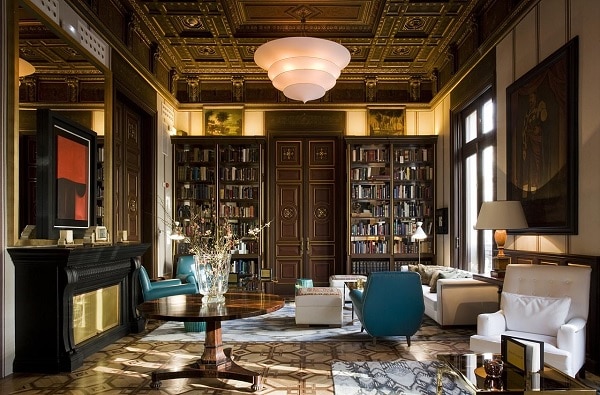 “Cotton House has a convenient location, excellent service and some richly decorated interiors as well as abundant outdoor space available in a city that has good weather much of the year. There is plenty to enjoy all around the hotel, but if you plan on luxuriating in your room, be sure to book one in an upper category.”

“Barcelona has no shortage of stylish luxury hotels, but the Serras definitely hits the spot for smart luxury with things like extra space, quality linens, comfortable seating and exceptional service that can really make a difference in a hotel stay.” 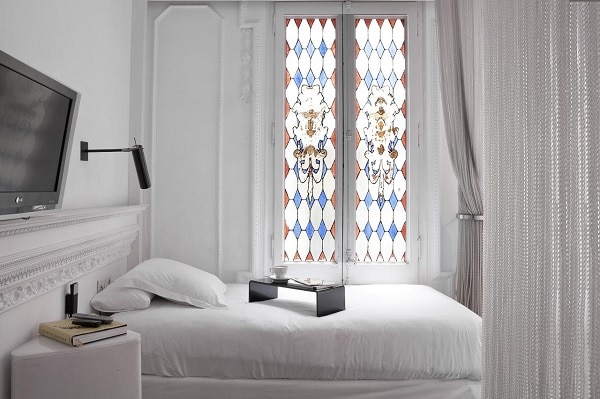 “A soothing retreat from downtown Barcelona, the Chic and Basic is a study in cool, with clever lighting in the comfortable modern bedrooms and a cream-and-white color scheme. The Chic and Basic also puts you very close to the Picasso museum.” 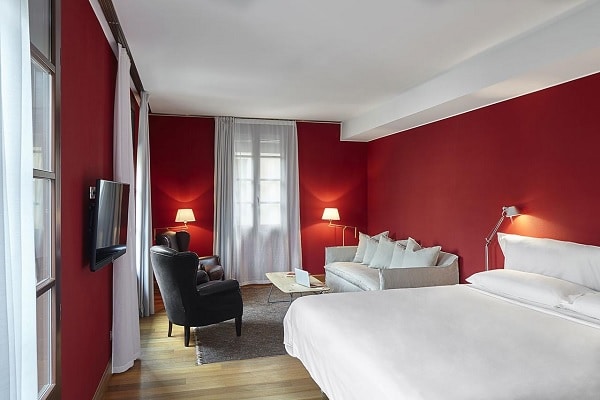 “A hotel inspired by a shoe, or at least by and because of the Camper brand. Like the boots they make, Camper’s first hotel aims to be trendy and functional. The rooms are unpretentious, and the hotel is well located.” “A beacon on the Barcelona beachfront, the W edifice gazes out into the Mediterranean. From the outside it’s eye-catching; inside it’s roomy, light and does a slick job catering to the guest prepared to spend extra on expansive sea views.” “Overlooking the magnificent plaza for which it is named, this 18-room property has handsomely designed rooms with beamed ceilings, hardwood floors and all-important soundproofing.” “This landmark seven-story, 19th-century building is a genuine luxurious treat. Furnishings and decor throughout are a lavish amalgam of teak, marble, steel, and glass while the opulent gold-leaf ceilinged guest rooms feature wood marquetry and paneling, custom leather furnishings, safes, and some of the city’s most sumptuous beds.” 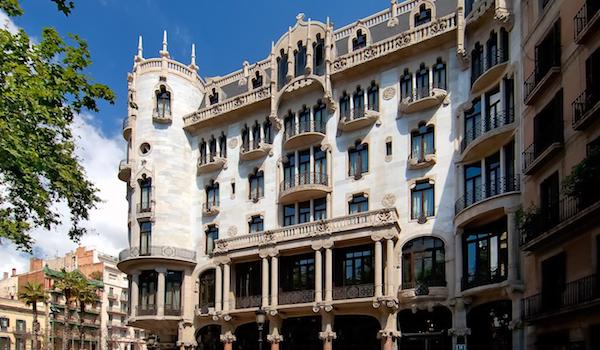 “This stunning Modernista building was designed by Lluís Domènech i Montaner for the Fuster family in 1908, and it was reported at the time to be the most expensive home constructed in the city. Modernisme’s heyday lives again in this deluxe hotel .” “This luxurious Ritz-Carlton-owned, 44-story skyscraper overlooks Barcelona from the Port Olímpic, providing stunning views of the Mediterranean, the city, the Sagrada Família, and the mountains beyond.”

Featured as Fodor’s Choice in Barcelona. “The lobby of this postmodern architectural stunner tells you what to expect throughout: perfect comfort, cutting-edge design, and meticulous attention to every detail. The minimalist decor is done in soothing tones of gray, purple, and orange.”

Featured as Fodor’s Choice in Barcelona.

What are the best neighborhoods to stay in Barcelona?
Barcelona is the capital city and the largest one of Catalonia region of Spain and is renowned for its art and architecture. The city is home to several renowned landmarks such as history museum MUHBA, Sagrada Família church, Casa Mila, La Rambla, among many others. Some of the best neighborhoods in Barcelona are:

Barri Gòtic
Barri Gòtic neighborhood is in the heart of the city and is dotted with ancient buildings standing side by side with the contemporary ones. The neighborhood comprises several clubs, restaurants, shops, and bars. The architecture found in this neighborhood is Gothic and the area is replete with little plazas known as ‘plaças’.

Eixample
Eixample is a neighborhood located in the outskirts of the original Barcelona city walls that was built to connect the old city with adjoining towns such as Gràcia. Visitors take long walks in this neighborhood to the other end and admire the architecture that attracts hundreds of thousands of locals and tourists to the area.

El Raval
El Raval is one of the most vibrant and genuine neighborhoods in the city. The area is home to numerous authentic restaurants of a wide range of cuisines as well as young and energetic artists who showcase and create their arts on the streets. It also houses the Museum of Modern Art.

El Born
El Born is a neighborhood best known for its lower crime rates and vibrant festive character. The area is the home to the Picasso Museum that is a treasure throve of culture and heritage of the city. The neighborhood’s Passeig de Born is a center of nightlife and has a wide number of bars.

Gràcia
Gràcia was a tiny hamlet that was included into the city and is now a neighborhood that has a village feel to it.
Which Barcelona hotels offer the best views?
The Hotel W and Hotel Arts offer some great views of the city of Barcelona, as well an excellent sea view. It's recommended to try one of those if you're looking for rooms with a view in Barcelona.
Which Barcelona hotels offer the best rooftop bar or restaurant?
If you're looking for a hotel with a great rooftop bar or restaurant, then try Hotel Ohla or Hotel Casa Fuster G.L Monumento. Hotel Omm and Hotel Casa Camper have an excellent rooftop terrace.
Which Barcelona hotels offer excellent breakfast?
Hotel Praktik Bakery and Hotel Omm offer great breakfast according the travel experts and customers who have stayed at those hotels. Hotel Chic & Basic Born offers some great food.
How much does it cost to stay in a Barcelona hotel for one night?
If you're looking for a 3-star hotel, it would cost you approximately $155 per night. For a 4-star hotel you would have to pay $190 per night on average. The luxury 5-star Barcelona hotels cost approximately $360 per night.
What are the best hotels near La Rambla in Barcelona?
If you're looking for a great place to stay near the famous La Rambla, then your best bet is Hotel Casa Camper or The Serras Hotel.
We use cookies on this website to analyse your use of our products and services, provide content from third parties and assist with our marketing efforts. Learn more about our use of cookies and available controls: cookie policy. Please be aware that your experience may be disrupted until you accept cookies.