We list the best hotels, hostels, B&Bs and guesthouses in Amsterdam as recommended by travel experts from CNN, Lonely Planet, Fodor’s, New York Times and more. All the hotel recommendations have been referenced with adequate customer reviews. The ratings you see here is an aggregate from several platforms and is always higher than 4 out of 5 stars. As such, you should have high confidence in our choices.

Amsterdam became one of the most important and busiest ports in the world during the Dutch Golden Age in the 17th century due to the innovative developments in trade. As of the time, the city was the leading center for both finance and diamonds. This made it incredibly attractive to businesses and tourists alike.

Today, the city of Amsterdam is regarded as one of the top financial centers in Europe as well as being considered as an alpha world city by the Globalization and World Cities study group.

If you like our list of best places to stay in Amsterdam, then you should also check out our selection of recommended hotels in Brussels or best hotels in Berlin. 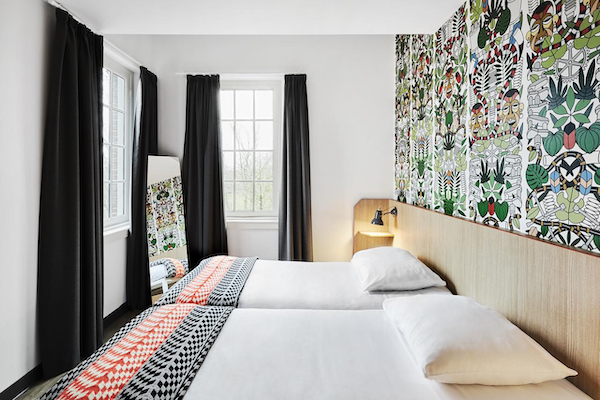 “The University of Amsterdam’s former zoological department has been respectfully transformed into a stylish addition to the city’s hostel scene, built among the trees of Oosterpark.” 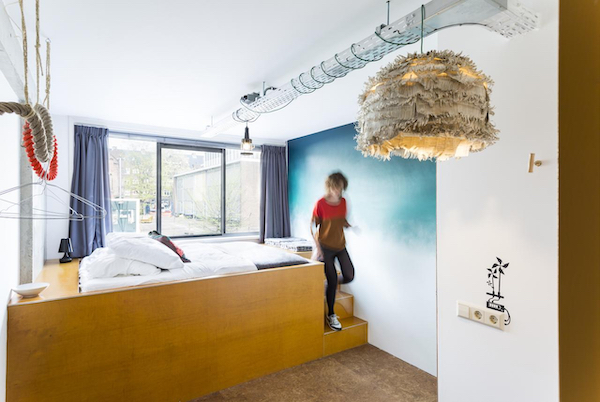 “A budget hotel with boutique style, and strong green credentials. Ecomama has a warm, welcoming atmosphere, delightfully imaginative design, good food, spot-on staff, and is run with a creativity of thought that puts it in a category of its own.” 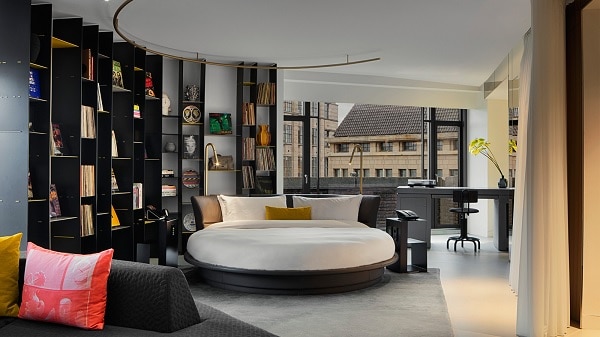 “Several high-end hotels have recently debuted across the city, among them the W Amsterdam. Opened in 2015 by the central Dam Square, the property offers 238 stylish rooms and suites, plus a rooftop pool with views of the neighboring royal palace.” 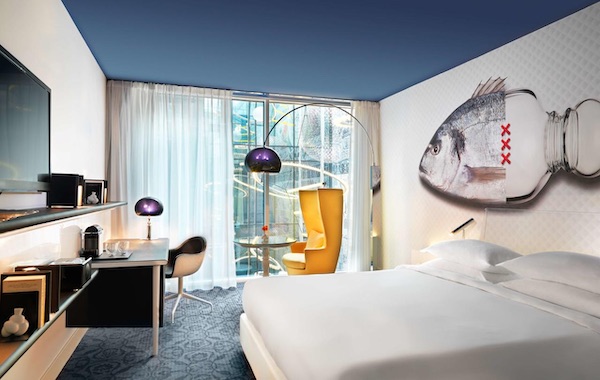 “The Dutch designer Marcel Wanders created the fantastical, color-splashed interiors of the Andaz Amsterdam Prinsengracht, which opened in 2012 with 122 art-filled rooms, many featuring canal views.” 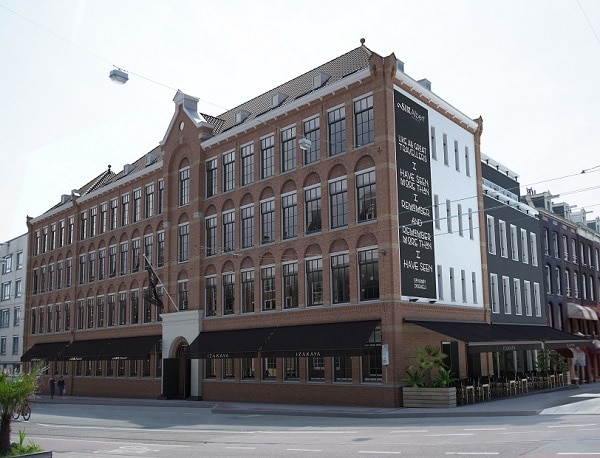 “A well-situated hybrid of new and old Amsterdam offers cosmopolitan hipness with surprising warmth and a sense of humor. The sleek Sir Albert five-story hotel has 90 rooms and suites, and a small but comfortable sitting area called the Study on the ground floor.” 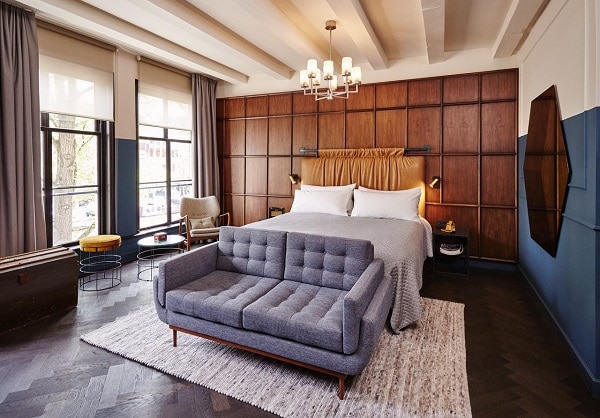 “The Hoxton Amsterdam, the first property outside Britain, opened in July 2015 with 111 rooms spread across five historic canal houses on the Herengracht canal. An excellent value with Dutch style and British humor, the Hoxton Amsterdam hits the sweet spot by balancing a hip vibe and relaxation.” 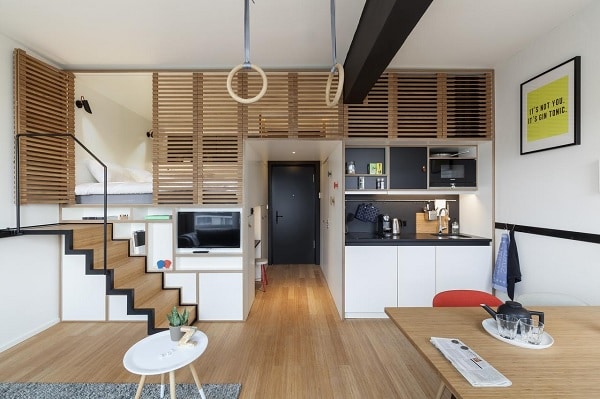 “If you’re a roving creative type visiting Amsterdam to work as well as play, Zoku is your place; the top floor features a light-filled communal work space chock-full of couches and tables, perfect for lingering over a coffee while you work.”

Featured as Fodor’s Choice in Amsterdam. 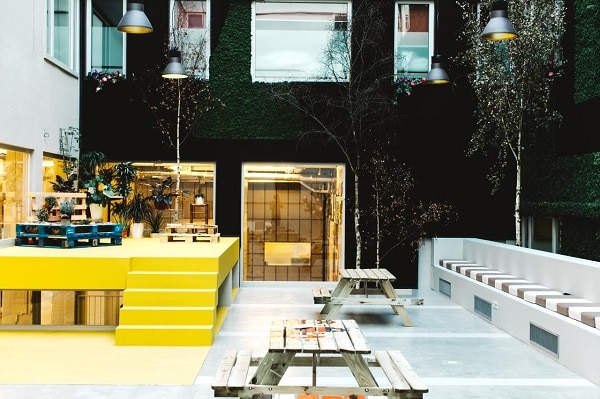 “Clink is a designer hostel chain with other branches in London, and in Amsterdam occupies a 1920s laboratory on the IJ riverbank, by the ferry terminal – a free, five-minute ferry ride from Centraal Station (ferries run 24/7).” 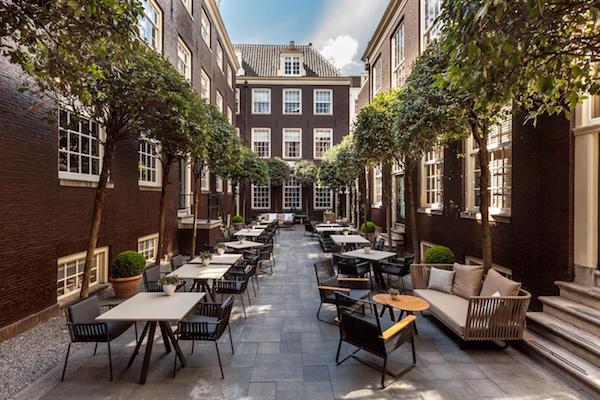 “Offering truly individual guest rooms with stripped oak floors, exposed beams, blindingly white bathrooms, and four-poster beds that you could lose a family in, Amsterdam’s glossiest boutique hotel is located in a former 17th-century theater on lively Keizersgracht and well deserves its accolades.”

De Pijp
De Pijp is a neighborhood with picturesque urban layout, brunch restaurants, and famous Albert Cuyp Market making it one of the best tourist attractions in the city. The city is home to a large number of pubs and bars and is the home to several hotels such as the Arcade Hotel, Atlantis Hotel Amsterdam, and Amsterdam Hostel Sarphati.

De Jordaan
De Jordaan is a residential neighborhood located in western Amsterdam and famous for its impressive culinary sector, photogenic townhouses, and welcoming atmosphere. De Jordaan houses great hotels such as Mr. Jordaan Hotel and Linden Hotel on Lindengraght, and gives access to several of the city’s main sites such as the canal belt, Dam Square, and Anne Frank House.

Oud-West
Oud-West is a densely-populated, multicultural, and cosmopolitan neighborhood that is home to several bars and restaurants, including Café Panache, De Gollem, and OT301. The neighborhood has great hotels such as Hotel de Hallen.

Overhoeks
Overhoeks is a southern neighborhood in the city that is notable because of its enormous skyline, including A’DAM Tower and EYE Film Institute. It has a wine bar-cum-cinema – FC Hyena – that screens the most recent arthouse movies and also has Skatecafe – an indoor skateboarding halfpipe.

Weesperzijde
Weesperzijde is a small neighborhood in the city that is named after a famous city planner. It has several hotels, bars, cafes, restaurants, nightclubs, and ateliers.
How much does a night in a hotel in Amsterdam cost?
If you want to stay in a 3-star hotel in central Amsterdam you would be looking at an average price of $140 per night. For 4-star hotels the average price is around $180 per night. For a 5-star hotel in central Amsterdam the average rate is around $280 per night.
Which Amsterdam hotel offers great breakfast?
The Andaz Hotel Prinsengracht is an excellent option if you're looking for a hotel offering great breakfast.
We use cookies on this website to analyse your use of our products and services, provide content from third parties and assist with our marketing efforts. Learn more about our use of cookies and available controls: cookie policy. Please be aware that your experience may be disrupted until you accept cookies.